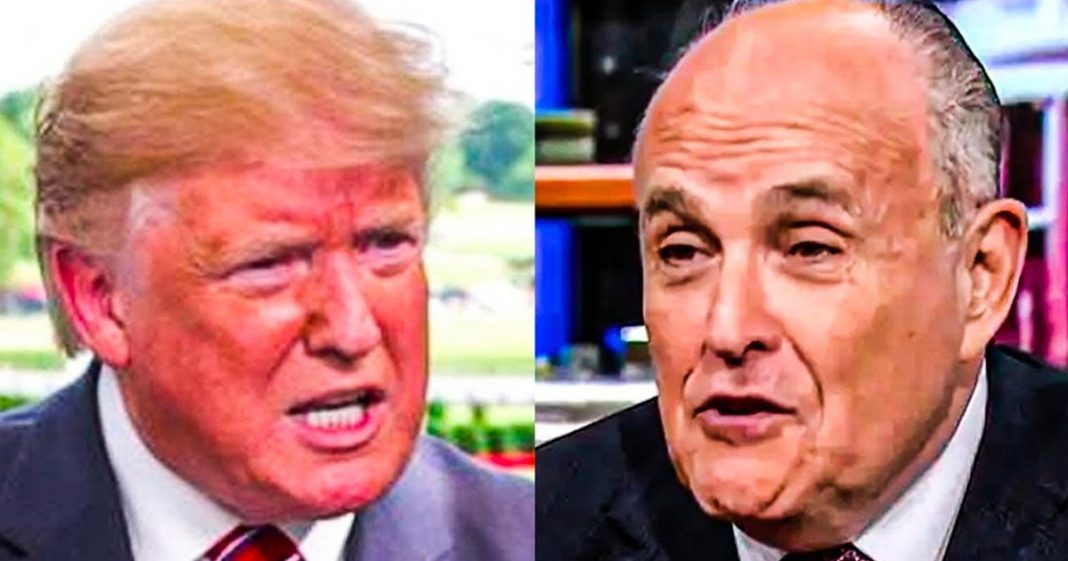 Rudy Giuliani’s legal bills are quickly growing out of control for the former NYC mayor, and his allies are wanting Donald Trump to pony up the costs. After all, Giuliani is only in trouble because of his association with Trump, and Trump claims he has more than enough money, so why not? But Trump is refusing to give any money at all to Rudy, increasing the likelihood that Rudy may need to turn on his former friend in order to save himself a lot of trouble. Ring of Fire’s Farron Cousins explains what’s happening.

Thankfully, I have never been under criminal investigation. Hell, I’ve never even been arrested. But I have to imagine that if you’re a high profile politician or former politician or public figure in any way here in the United States, and you’re trying to fight off an investigation saying that you may have been acting as an unregistered foreign agent, that’s probably got to get pretty expensive. Right? You want the best legal counsel that money can buy and that is the situation that Rudy Giuliani has put himself in. And according to a report by the New York Times, those bills are adding up fast and Giuliani isn’t a Donald Trump. Giuliani doesn’t have a billion dollars in the bank. Giuliani has gotten money, but when you have to fight a legal battle of this caliber for this long, even the biggest fortunes can run out pretty quickly because these lawyers aren’t cheap.

So what is happening? Well, according to the report, Giuliani’s friends, including Bernie Kerik, believe that Donald Trump should be paying some of these bills. He’s got the money. He always brags about how much money he has. He’s good friends with Giuliani. Giuliani ruined his own reputation, defending this guy, filing these fictitious election fraud lawsuits. He’s now also facing billions in defamation lawsuits, not to mention the investigation in New York. So yes, Donald, pony up. Help your buddy Rudy out here. But the report says that Donald Trump has told his friends that Giuliani is not going to get a dime from him. He’s not going to pay any of his bills. And at this point, I’m honestly wondering if Donald Trump has actually paid Rudy Giuliani for any of the legal work that he’s done for him over the years. There were reports when Giuliani first stepped up as the guy that was going to challenge the 2020 election that he had allegedly asked for $20,000 a day. He came out and said, no, no, no, that’s ridiculous.

I’d never asked for that. Um, and I’m sure Donald Trump would never paid that. But that it is basically what good legal representation might run you in massive cases. And, uh, that may be what Giuliani has to spend. So like I said, even if you’ve got a fortune, a small fortune, you can go through that pretty quick if you are paying 10 to $20,000 per day. Amazon in Alabama was paying their anti-union lawyers $10,000 a day to fight unionization efforts. So you can’t tell me that Rudy Giuliani facing, you know, potentially given his advanced age, the rest of his life in prison, isn’t trying to pay for the best of the best. Right? No offense to public defenders, but this isn’t the kind of thing you want to go get somebody fresh out of law school, working in a public defender’s office to defend you on. But he wants his buddy Trump to pony up and there’s one thing Trump is never willing to do and that’s give up money.

I wish Rudy Giuliani understood how one sided that entire relationship has been. He didn’t get the pardon. Probably didn’t get paid for his bills. I would like to see some receipts to see if that actually happened. And he’s not getting his bills paid by Donald Trump now, even though Giuliani’s only in trouble for doing things that Trump wanted him to do, that’s the other crazy part of it. And that’s what the allies of Giuliani are kind of saying like, listen, dude, he did these things for you. You kind of owe it to him. And Trump’s like, I don’t care. And to be honest, Trump doesn’t have to care. And Rudy, you don’t have to care either bud because you know what you could do. Do you know what you could do? You could flip, you could roll on him. You could give up the entire Trump clan if you had to. And let’s be honest, Rudy, you can’t afford good legal representation for this long. So it may be time to get with that DA and play let’s make a deal.