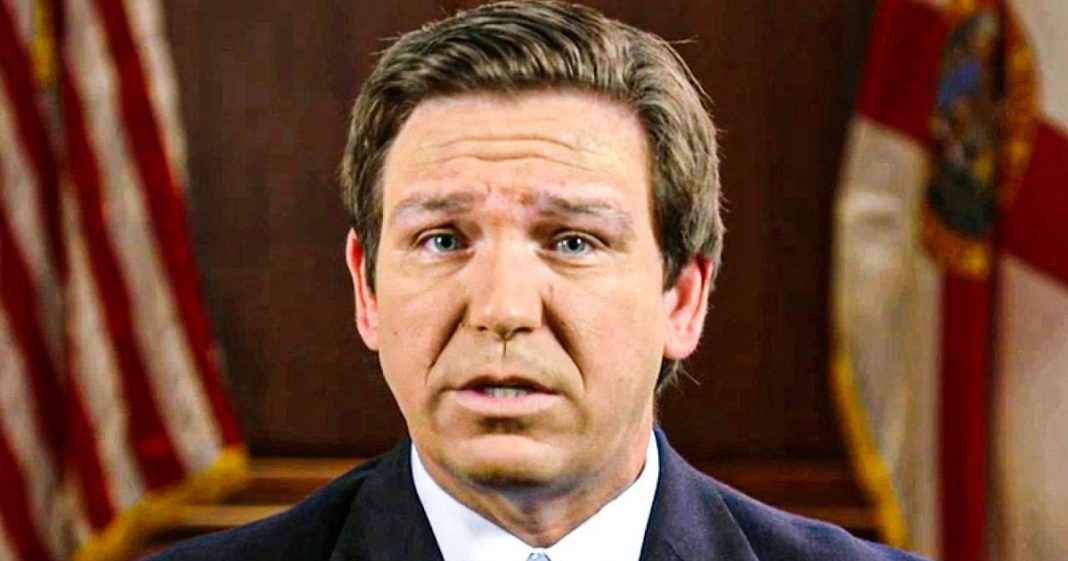 Florida’s Republican Governor signed one of the country’s most oppressive voting bills into law this week, and he made sure that Republicans across the country got to see him do it by only allowing Fox News to be in the room during the signing. But before the ink could dry, DeSantis was sued by multiple different civil rights groups for this blatant attack on the rights of Florida citizens. Ring of Fire’s Farron Cousins explains what’s happening.

On Thursday of this week, Florida’s Republican governor Ron DeSantis signed one of the most sweeping voter oppression bills in the United States into law. And he did it behind closed doors where reporters were not allowed to go with the exception of one group and that one group of course, was Fox news. Real reporters from other outlets were not allowed to go in there. Not allowed to see what was taking place. But Fox news got to broadcast the thing live because Ron DeSantis wanted to make sure that every hardcore idiot Republican in this country was watching what he was doing. Now, here’s the thing. What does this piece of legislation do? Obviously that’s at the heart of this, not just him letting Fox pander to their idiotic base. But the bill much like Georgia’s bill, reduces the number of dropboxes, reduces the number of people who are allowed to vote by mail, makes people have to re request, even if they’ve basically been on a always vote by mail kind of list, does away with those.

You have to go out of your way to make sure that you have requested a ballot and that you qualify to even vote by mail, which I’ll get to this in a moment, but that is actually adversely going to affect Republicans. They’re terrified about it now. But anyway, it also makes it illegal to give them food or drink while they’re waiting in a voting line and all of the other things that typically all of the other voting oppression bills do. Moments after he signed this multiple lawsuits were filed by civil rights groups across the United States seeking to overturn the law, saying that it addresses problems that don’t actually exist because there was no fraud that could be found in the 2020 election. It’s all a farce, it’s all for show. And honestly, him inviting only Fox news into there kind of proves that it’s only for show. And I think that fact would actually come back to hurt him in a lawsuit by proving that, yes, this was a wholly purely partisan thing that doesn’t actually address any real problems.

Now, whether or not these lawsuits are going to be successful, hit or miss, right? I mean, we saw success in the lawsuit overturning those poll taxes that DeSantis also signed a year ago. But then later court decisions that got overturned and the poll taxes were reinstated. So this guy who’s only been governor, by the way for two effing years, has already launched two major attacks on voting rights here in the state of Florida, meant to suppress Democratic voters and voters of color. But as I had just mentioned, right, there’s something that worries the Republicans. And here it is because in addition to suppressing voters of color, suppressing college students and suppressing Democrats, it also suppresses roughly 35% of Republican voters in the state of Florida, enough to swing an election. Here’s why. For years and years and years, Republicans in the state of Florida have been encouraging their increasingly elderly base to vote by mail.

And now they just made it harder to do so. 35% of the Republicans in the state of Florida voted by mail in 2020, 35%, most of them elderly. Now you’re taking that away from them if they don’t have a valid excuse, if they can walk on two legs, hey, they got to go to the polling place. And you’re also closing down some polling places, consolidating them, removing ballot dropbox, even if they do decide to absentee vote, cutting back voting hours. So yeah, you just screwed your base. Honestly, I hope this comes back to bite you, but more than that, I hope the whole thing gets overturned with these lawsuits. And DeSantis’ smug little face as he was signing this thing needs to be a campaign ad for Democrats across the country. They need to show how happy he was taking away the right to vote from millions of Florida residents, because that’s all the Republican party can do. That is the only way they can stay in power today. They can’t win on issues. So just win by forcing the other side to not be allowed to vote.