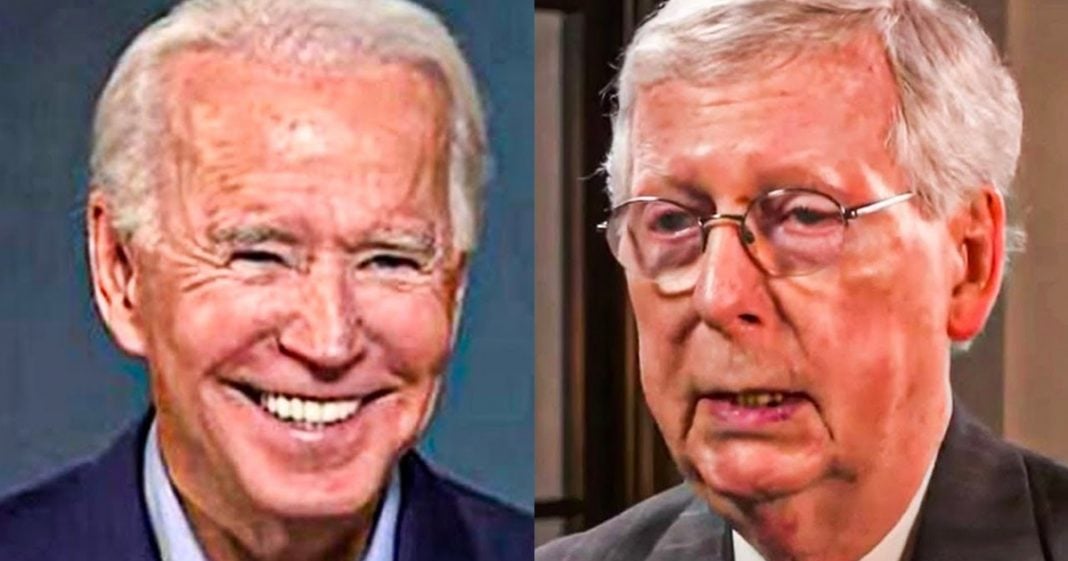 Senate Minority Leader Mitch McConnell is apparently either immune to hypocrisy, or he believes that his base is incredibly stupid. Either way, last week he said with a straight face that President Biden is the one that is politicizing the Supreme Court with his newly-formed commission, and McConnell couldn’t fathom anything like that happening. The truth is that the courts are McConnell’s only legacy, and it is one that will outlive him by decades. Ring of Fire’s Farron Cousins explains what’s happening.

After Ruth Bader Ginsburg died just a month before an election. The guy who helped Donald Trump get hundreds of judges appointed to benches all over this country to the point where more than 25% of US district court judges are now Donald Trump appointees. He suddenly thinks that liberals have been on a crusade to politicize the court. Mitch McConnell, the same guy who went nuclear on the Supreme Court filibuster to where you only had a, had to have a simple majority vote. You didn’t have to have the 60 vote threshold anymore. Mitch McConnell literally changed the rules, literally changed his talking points in just a span of a couple years so that he could pack the courts. But now, now when Democrats are finally saying, all right, screw it, gloves are off. We’re going to do the same thing. Mitch McConnell goes and cries and said, well, it’s really sad that they’re politicizing the court, mer.

I think, Joe Biden should expand that US Supreme Court as big as he can, as big as he wants. I want so many Supreme Court justices that they can’t even fit in the building anymore. And you got to start having court outside with justices, judges, just up and down the steps leading into the Supreme Court, listening to oral arguments. That’s what I want. You know why? Because the US Supreme Court has already been a joke for decades now. It is a political arm of whichever party is in power. And yes, they issue decisions that have very real-world consequences that, that change the very fabric of this country, all the time. And that’s why it’s so bothersome that the court has become so politicized. It’s a campaign talking point. Do you want this sob to pick your judges or do you want this one to pick your judges?

They’re going to pack it with liberal hacks who are gonna make abortion mandatory. They’re gonna pack it with people who are going to make abortion never allowed again. It’s all a political joke. And these politicians, they don’t care one way or the other how that court actually swings, folks. Believe me, behind the scenes, they don’t do a dam. They use it as a talking point to sway you to vote one way or the other and that’s it. That’s what the US Supreme Court is. So, you know what? Expand it. Put a thousand judges on that court for all I care. Knock it down to one judge if you want, because the whole thing is joke anyway.