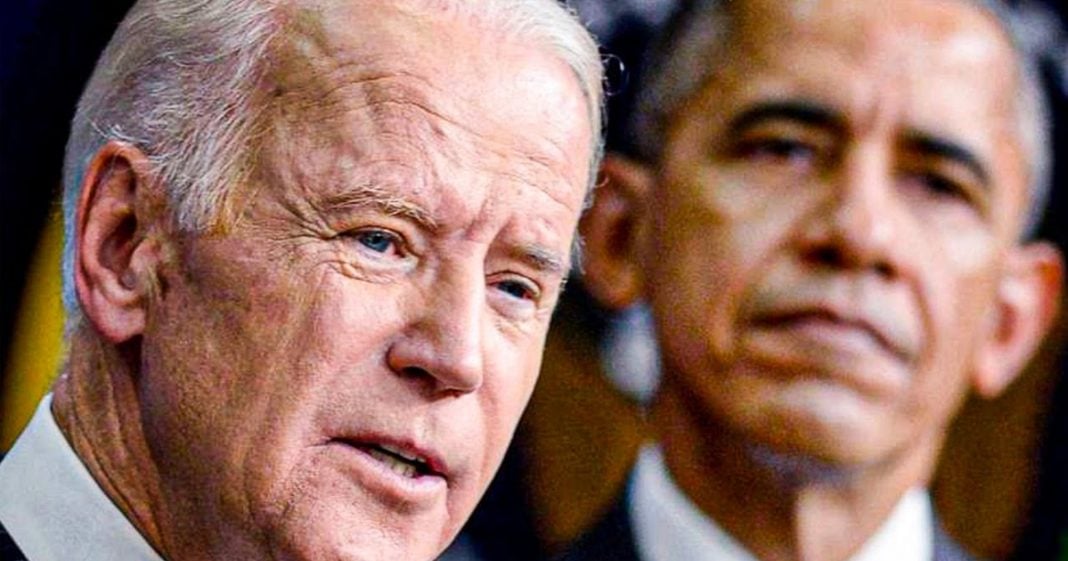 The biggest mistake that the Obama Administration made was spending too much time trying to convince Republicans to go along with their plans, even when the Democrats controlled all of Congress. The Biden administration is also extending the olive branch to these obstructionists, but they are quickly moving on when it becomes clear that Republicans don’t want to move forward. This is exactly what we need from the Democrats, and they need to be doing the same thing to members of their own party, too. Ring of Fire’s Farron Cousins discusses this.

During Obama’s first two years in office, the biggest mistake that his administration made was trying to make Republicans happy, repeatedly extending an olive branch, trying to work with those jackasses on the other side of the aisle, even though they had pretty decent control of both the House and the Senate, the Democrats did. They actually had greater numbers in both the House and Senate than they do right now when they controlled both chambers. But even still, Obama was a unifier, country became too divided under George W. Bush and Obama was going to bring us all back together with that hope and change that never materialized because he wanted to work with Republicans and they ended up just kicking him in the face every time. Joe Biden was a part of that administration and Joe Biden, now president of the United States, is trying to not repeat those same mistakes of the Obama years.

Now don’t get him wrong. He’s still trying to reach out to Republicans, absolutely. We know that, we’ve discussed that at length. But what he’s not doing is sitting around and waiting for them after basically telling them, you know, sitting them down in meetings like he did with the COVID relief package. Like he’s done with infrastructure. Like he’s done with so many other things already. He sits them down in the oval office and says, hey, all right, what’s your plan? What you got? What could we do to make you like our plan? Okay, well, we’re not going to do that. So, uh, see ya. We’re moving forward with it. You know, he’s not giving them weeks or months to mull it over like Obama would. He’s not sitting there and waiting and saying, okay, well you give me your plan and, you know, whenever you get back to me, then we’ll go forward.

No, he’s saying, well, screw it. If you don’t have any ideas, if you’re not going to join our plan no matter what we do, then what’s the point of even talking to you? We’re going to move forward with it. We’re going to do reconciliation if we have to and we’re going to pass it. And that is exactly what we need to happen right now. Now Biden has not been perfect. You know, as a, as a progressive myself, I, I don’t like many things that he’s done. His immigration policy is absolutely horrendous, borderline criminal, same thing with his foreign policy. You know, he’s, he’s selling more US weapons to Saudi Arabia that are going to be used to kill civilians in the middle East, including American soldiers. He’s pulling us out of Afghanistan. Sure. He’s leaving 15,000 US contractors over there. So really not actually pulling us out. But here on the domestic front, with the exception of immigration, there’s a lot to celebrate.

Okay. You cannot be serious about politics and say that everything Biden has done has been bad. No. The relief package though, not as big as it should have been, was a good thing. It just, reports are now showing because the biggest increase in consumer spending that we have seen in years. So it helped. It did things. This infrastructure package, again, not quite as big as it should be, but still pretty dang massive and would put us on a path towards getting to renewable energy. Other things with the, the environment, you know, banning new oil and gas leases. You know, stopping the drilling in fragile, sensitive parts of the United States. Those are things that needed to happen and he’s done it. Keystone XL is gone because of him. So you can’t say everything’s bad, but you sure as hell can’t say everything’s good. But if he had sat around and waited for Republican approval for every single one of these things that he has done, he would have accomplished absolutely nothing up to this point.

And that’s what Obama tried to do. So I’m grateful that Biden is not making those same mistakes. The one thing I ask is that he sit down with people like Joe Manchin and Kyrsten Sinema and get them on the same page as the rest of the Democratic party. Show them the polls that show that even Republicans like the policies he is proposing and supporting. Show them that and then show them that you mean business and you will go out there and you will call them out to the entire public if they don’t get on board and support these hugely popular programs that are going to help millions of people. They have to be as hard-line with some of their own members as they are with the Republicans. And that is the thing I’m still waiting to see.