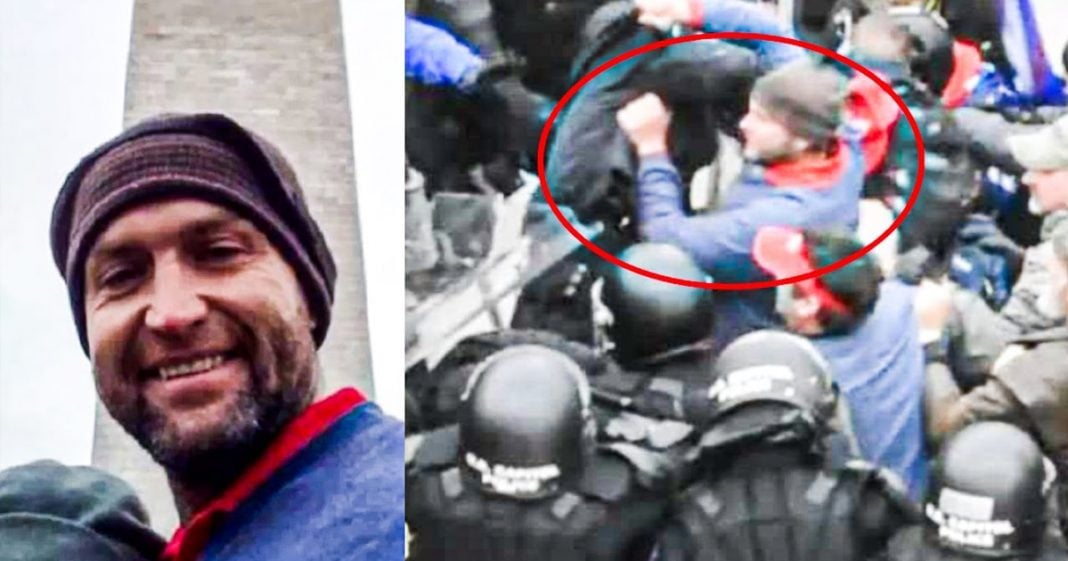 During a virtual court hearing this week, a Capitol rioter named Landon Copeland became irate and belligerent at anyone and everyone, repeatedly having to be either put on mute or into a separate Zoom room for him cool down. His own lawyers were trying to argue that the man had been radicalized by watching Fox News for 6 months straight, and the comment only made Copeland even madder. Ring of Fire’s Farron Cousins discusses the bizarre court hearing and why it likely won’t do Copeland any favors.

One of the Trump supporters who took place in the January 6th insurrection at the Capitol, had a court hearing this week via zoom that immediately went off the rails. The rioter or suspected rioter I guess we have to call him as, you know, whatever. But anyway, he goes a little bit crazy during the zoom conference. Multiple times, they either have to put him on mute. At one point, the judge actually took him, put his little thing in a separate zoom room so that he would stop disrupting the hearing that was taking place. And when he wasn’t on mute, when he wasn’t in a separate room, he was launching into profane tirades against the judge, against the clerks, against the lawyers, against everybody involved in this. And of course, at one point he even got off at his own lawyers for saying that he suffered from quote Fox itis, meaning that he spent the last six months watching Fox news, got radicalized and then went to storm the Capitol as a result of what he saw on Fox news.

Now that’s a very salient point there. And that’s something that’s kind of getting overlooked in some of the coverage of this issue. But either way, I got to read some of these quotes that this nutjob blurted out during this court hearing. Little profanity here, a lot, actually. I’m going to try to, you know, not say it just in case you got kids around, but, at one point you said, you people F this up. You’re going to give me a psyche eval, I don’t like 70% of my income going to the government. F you all or F all of you. I’m sorry. I don’t like you people. You’re a robot to me. You can’t come get me if I don’t want you to. F all of you, F all of you. I want to talk in open court, you mother F’ers. He told a clerk at one point, you are evil. At what point am I a free individual versus a pre-trial confinement individual? Is this negotiable? I used to be a free man till you locked me up. At one point, his lawyer said this, this is great, in my conversations with him, I don’t think he’s being intentionally belligerent. I don’t think he’s competent to proceed right now. Now, Copeland is a veteran who says, in the hearing that quote, he got shot in Iraq.

And his own lawyer is sitting there being like, look, I don’t think this guy’s just being a dick to be a dick. Um, he’s not competent. They do think there could be some PTSD there, and that may be why he’s acting out like this. Why he’s lashing out, why he even took place in the Capitol riot. But the man is accused of, by the way, assaulting police officers during the riot. Allegedly he took a barricade and threw it at police officers. So that’s what all of this is about. It’s not just that he was there. It’s that he was literally hurling very large and heavy objects at police officers with the intent of hurting them. He also had posted April 28th on Facebook, and this is the creepy thing. This is what’s likely going to get this man locked away for a long time. And this had nothing to do with the hearing, but posted this on the 28th and it was read during his hearing. So that everyone knows I go to see the FBI and a judge tomorrow, I guess, peacefully protesting at the Capitol is now illegal. And they’re trying to hunt us all down and try to teach us a lesson. Unfortunately, only one option remains when we return, we bring guns and take the Capitol building without intention of being peaceful. This ends with the government bombing their own people. I had hopes it wouldn’t, but here we are.

Okay. So this dude has now said on Facebook and they read it in the hearing that he’s encouraging people himself included to go back to the Capitol with no intention of being peaceful and with guns. Okay. I would think case closed at this point, case closed. Remove him from society, get him the help he needs, the rehabilitation he needs, not just lock them away and forget about him. Get him the help that he needs, the mental help that he needs and we’ll go back from there in a few years. But that’s what has to happen. This is a violent individual. This is a deranged individual. This is an individual that actually does need help, but he can’t be a part of society based on what he’s saying here. And this is how the system is supposed to work. He does need that psych evaluation, but more than that, he needs constant monitoring. He needs somebody to help him work through these demons, help him work through the PTSD, find a healthy way to overcome whatever it is that’s kicking around up there. There are ways to do that, and he needs them. But based on his violent statements, he can’t be a free member of society while that happens.