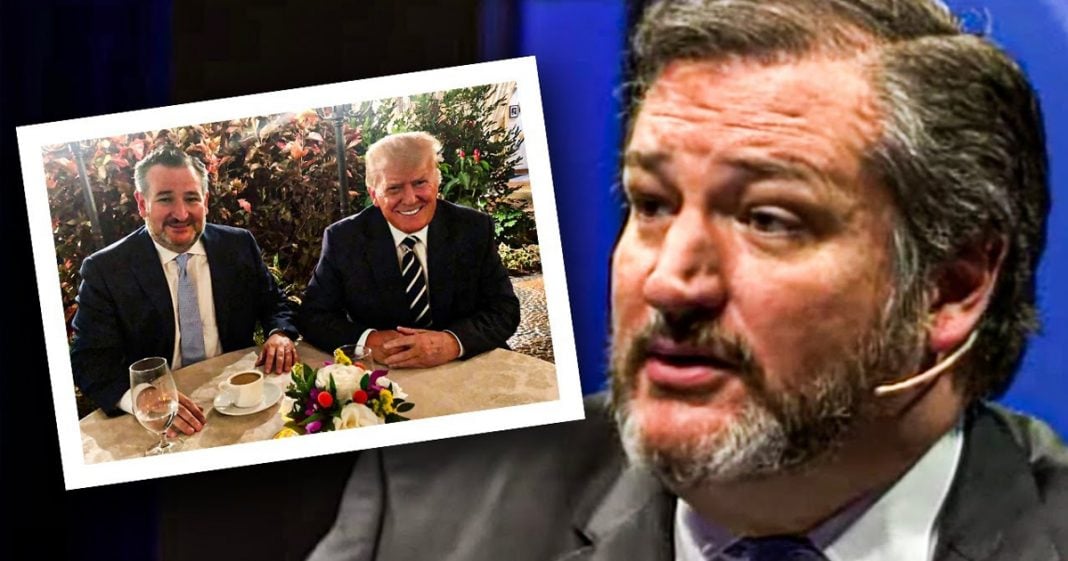 Ted Cruz thought it was a smart idea to post a picture of himself having a lovely dinner with Donald Trump on social media this week, and it went over about as well as you would expect. Cruz was brutally mocked by many, including Democratic Representative Alexandria Ocasio-Cortez, who called him out for supporting the attempted coup by Trump supporters earlier this year. Cruz is pandering as hard as he can, the question that remains is will it actually pay off? Ring of Fire’s Farron Cousins discusses this.

Republican Senator Ted Cruz thought it was a smart idea earlier this week to tweet out a photo of himself and Donald Trump having a lovely, lovely dinner at Mar-a-Lago. And immediately of course, Ted Cruz got brutally mocked by everybody on social media for doing this inclusion, including, excuse me, representative Alexandria Ocasio-Cortez who attacked Cruz and said, always nice reminiscing about attempted coups near a bouquet of flowers. But here’s the thing. This is what Cruz tweeted out, along with the photograph. Had a great dinner tonight with president Trump at Mar-a-Lago. He’s in great spirits. We spent the evening talking about working together to retake the House and Senate in 2022. What a weird thing to say. He’s not some relative in hospice. Okay. He’s not somebody on their death bed at a hospital that the family goes and visits and says, oh well, he’s, he’s in good spirits.

Like that’s what you say when somebody doesn’t have much time left on this planet, like, well, he’s, health’s not good, but he’s in good spirits. I know, I mean, you literally, when you hear that phrase, you’re like, aw, well, bless his heart. You know, we’ve, we’ve all been there with a relative or somebody who somebody said, well, he’s in good spirits. So again, Ted, weird thing to say, weird, weird, weird thing to say, even weirder than Donald Trump’s creepy smile in the picture. There is no lighting on this planet that makes that man’s face look normal. Um, but here’s thing, yes, Ted Cruz as AOC pointed out was in fact supportive of Donald Trump’s attempts to overturn the 2020 presidential election. But Ted Cruz also wants to be president himself and he knows he can’t win over the moderate Republicans in the party.

Hell, he already tried that. Because there’s going to be other people just like him. So what he is trying to do is pander. That’s what that photo was all about. He’ll take the abuse from the left all day long, because that doesn’t matter to him. Those aren’t the people that are going to be voting for him in a primary and certainly not in a presidential election. But what he’s trying to do is send a message to all of the hardcore Trumpers out there. Look at me, elbow to elbow with your guy here, having a lovely well done steak dinner with ketchup. I’m just like him. Please love me and vote for me. That’s what this photo was all about. Ted Cruz is still ambitious. Ted Cruz still desperately wants to be the president of the United States and the only way he knows how to do it is to continuously change who he actually is because that’s what he is.

He’s a political chameleon. He will go and do and say whatever he thinks is politically expedient. And he will change his color the very next day if he has to. Just like in the 2016 primaries, when he hated Donald Trump, Trump insulted his wife, implied that his father somehow was involved in the JFK assassination. Cruz hated the man. And then when Trump became the nominee, he loved him. He was out there, we’ve all seen the sad fixture, picture of Ted Cruz on the phone at a Trump phone bank looking miserable with his entire life and all the decisions he’s ever made. We saw him cozy up to Trump during the Trump administration. Although Trump clearly never apologized for what he said about Cruz’s wife. But that doesn’t even matter to Ted because he just wants the power. And in order to get the power, you got to win over the crazies. And that is what that photo and that dinner was all about.