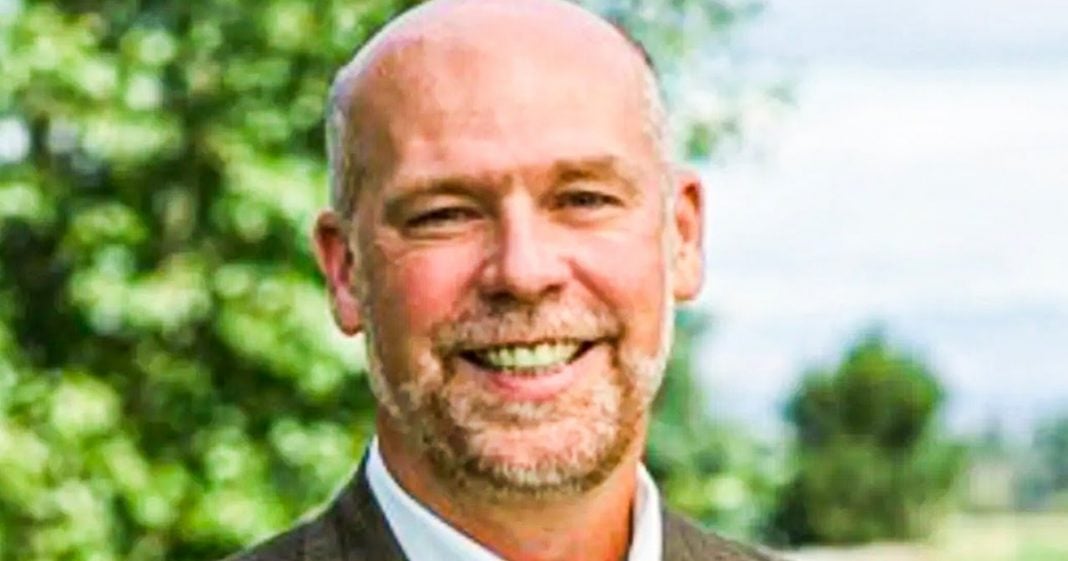 Montana Governor Greg Gianforte announced this week that his state would no longer be participating in the expanded unemployment benefits provided by the federal government, cutting down payments for out-of-work people by $300 per week. He says that he is doing this to make people get back to work, but they aren’t staying home because they are getting wealthy off unemployment – they want to be paid a living wage that actually allows them to have a life. Ring of Fire’s Farron Cousins explains what’s happening.

Montana’s Republican governor Greg Gianforte announced yesterday that the state of Montana effective June 27th is opting out of the federal government’s increased $300 per week unemployment payments because by God, he just wants his state to go back to work. So he’s going to make it to where you can no longer support yourself or sustain yourself on these extended unemployment benefits that have been in place for nearly a year at this point. And they’ve been reduced several times, again, now it is only an extra $300 a week. In the beginning was an extra $600 a week because we were trying to pay people one, who lost their jobs due to the pandemic, but two, to be able to stay home so that we could wait it out, flatten the curve. But because we had a patchwork of different COVID regulations state to state, that never happened, because the federal government under Trump was completely incompetent.

And now Republicans in Montana say, screw it. We’re sick of this. Y’all get up, get dressed and get to work. See, here’s a problem with that though. We have seen, and this is the new Republican talking point that’s coming out. You know, they’re, they’re, they’re saying everybody’s making too much money on unemployment and they don’t want to go to work anymore. Why don’t you want to go work for $7.25 an hour and get yelled at by a bunch of Karen’s unhappy because you messed up their name on their coffee cup. Why don’t you want to do that in the middle of a pandemic? I think what’s happening here and again, a lot of that is purely anecdotal. Okay. There is not hard data that says that millions of Americans are choosing to remain on unemployment rather than go to work because they make more money. That is strictly a Republican talking point, purely anecdotal. But let’s assume for a moment let’s, let’s play their game. Let’s assume for a moment that that is what’s happening with, with millions of workers across the country.

What does that say about American businesses? Hell, Denny’s actually had a shareholder revolt this week after the company announced, do you know what, we’re going to raise our minimum wage because in California, where the minimum wage is higher, obviously than the national average, um, we had to raise our minimum wage there and it actually increased our business. Like we do better when the minimum wage is increased. When we pay people a living wage, guess what? A lot of them come back and spend it at Denny’s. And that’s actually a thing I have talked about multiple times for years, folks, is that things like going out to eat when you’re dirt poor, that’s a luxury. And that is one of the first luxuries that you start doing again, when you actually have a little bit of spending money, that and car repairs. I know, I’ve been there, I’ve done it. So if we’re assuming that Republicans are correct and that all these people are simply staying home, because uncle Sam is paying them too much money to stay home.

That’s more of an indictment of American business. It’s not an indictment of the people who finally got a taste of what it’s like to have money for once. And I’m not even talking about riches. I’m talking about having enough money to pay your bills and maybe God forbid go buy a pair of shoes or go eat at Waffle House or Denny’s, that’s what I’m talking about here. These people suddenly realized I don’t have to live in squalor. I’m only living in squalor because that’s the system they, the employers, have put in place. And this isn’t fair. We demand more. But they’re not going to give them that opportunity. We’re not increasing the minimum wage yet because you have all the Republicans and some of the Democrats saying, no, we’re not going to do it. You have corporations that have met behind closed doors, like Denny’s and McDonald’s and the national restaurant association that have said, hey, guess what, raising the minimum wage helps us.

But, shh, don’t tell anybody. We’ve seen States that have raised the minimum wage to $15 an hour, boom after they raised the wage. But we would rather keep these people in squalor, keep them fighting for every single penny, just because we don’t want them to live comfortably. We don’t want them to have a bigger piece of the pie. We don’t want them to know that we can take care of them because maybe at that point they may start asking for more and more and more because they think the average worker out there is as greedy as they are, which isn’t true. But that’s what’s happening in America and you can expect more States to follow in Montana’s footstep, take away these extended unemployment benefits and force these people back to work or make them once again have absolutely nothing and only increase their economic hardships.