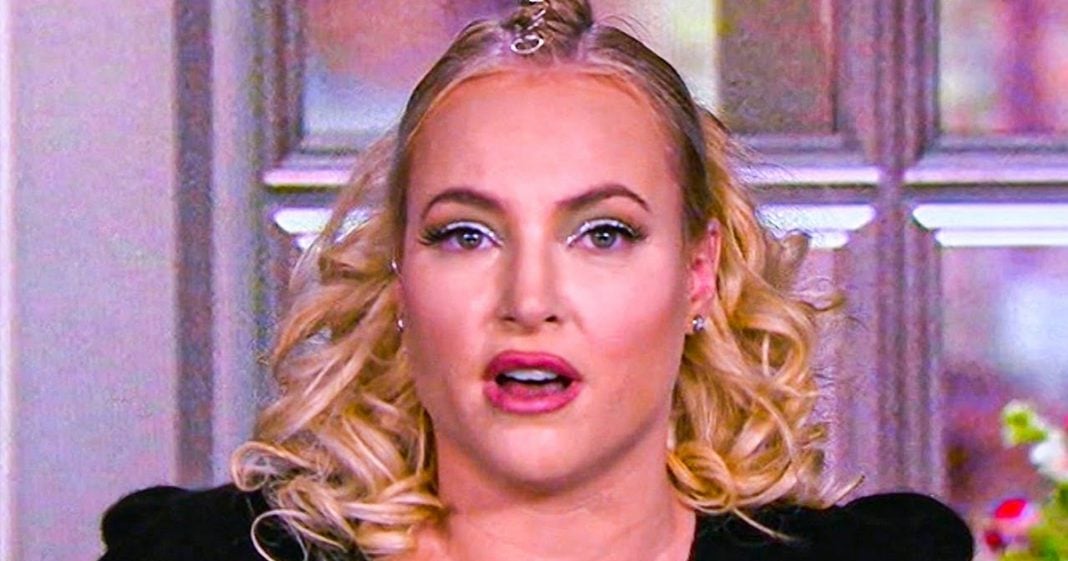 Meghan McCain didn’t mince words on Wednesday when she let Republican leadership have it over their treatment of Liz Cheney. McCain’s take is actually the correct one in this situation because she finally framed it as what it really is – a woman not being willing to “bend the knee” to Donald Trump and she’s now being attacked for it. Ring of Fire’s Farron Cousins discusses McCain’s warning and explains why she is absolutely correct.

Meghan McCain is furious about the way the Republican party is treating Liz Cheney. And she made that very clear during a segment on the View on Wednesday, when she had this to say, I feel very defensive of Liz Cheney. And if you do this, which it looks like they’re going to do, which she’s talking about like ousting her from committees or whatever, I promise you, there will be consequences. One way or another there’s going to be consequences. Um, and then she goes on, but first I want to address that. That was very super villainy, by the way, Meghan McCain. I understand you’re mad, but at the same time, let’s not go like full Skeletor and be like, oh oh, you will pay. By Odin’s beard, you will pay. Um, all right. So she continues and actually I know a mocking her for a moment there, but what she goes on to say here is the correct way to address the Liz Cheney situation that I have not seen other outlets do.

I have critiqued the other outlets because they’re trying to prop Liz Cheney up as some kind of Saint, which is not the case. But, but Meghan McCain actually nails it here. Listen to this. Go ahead in this sausage fest of MAGA up on Capitol Hill, pull her out and put another woman in who will do and say anything you want for president Trump. The election wasn’t stolen. He is Jesus. It’s only Trumpism going forward. See where this lands us in midterms. I’m absolutely furious. See, she didn’t say that Liz Cheney is being punished for telling the truth as CNN put in a headline. She didn’t say that Liz Cheney is, is, is the moral standard for the Republican party. She said, Liz Cheney is not all in on Trumpism and that’s the truth. She didn’t go on to defend any of the other crap that Liz Cheney has ever done.

Didn’t try to put her up on a pedestal. Just said she isn’t a Trumper and Trump, by the way, is not Jesus either. And then of course the most important part, follow this path for the midterms and see where that gets you. See what happens to you is literally what I have also been saying. And it’s actually nice to see Meghan McCain lay it out this way instead of being all flowers and roses and all Liz Cheney is some kind of Saint, just like they do with Donald Trump. No, she didn’t do that. She just said, this woman is not all in on Trumpism and she is being punished for that. And that is the truth. That is the truth. So I really, really am shocked at myself for agreeing with Meghan McCain on that, because that is not something that happens very often at all. But Meghan McCain is right. Liz Cheney is potentially being punished just because she doesn’t want the party to be the party of Trump.

And if the Republicans want to continue down this path, it is going to cost them dearly in the midterms, which is why I always add at this point, I hope they do. Go ahead and punish Liz Cheney, kick her off her committees. Do all of those things that you should be doing to Matt Gaetz, to Liz Cheney. Because once you do that, you will be showing the public that there is no chance of redemption for your party at all. And watch how many people that turns away. Trump already has an underwater approval rating. Technically lost the presidential popular vote twice. Lost you the House in 2018, lost you the Senate in 2020. And yet you morons still continue to double down on him and ignore anyone who says, maybe this isn’t the best path forward. You get what you deserve at this point and I think that’s the point that Meghan McCain was trying to make. But unlike Megan, I hope you continue down this path because I desperately want to see you get what you deserve for it.