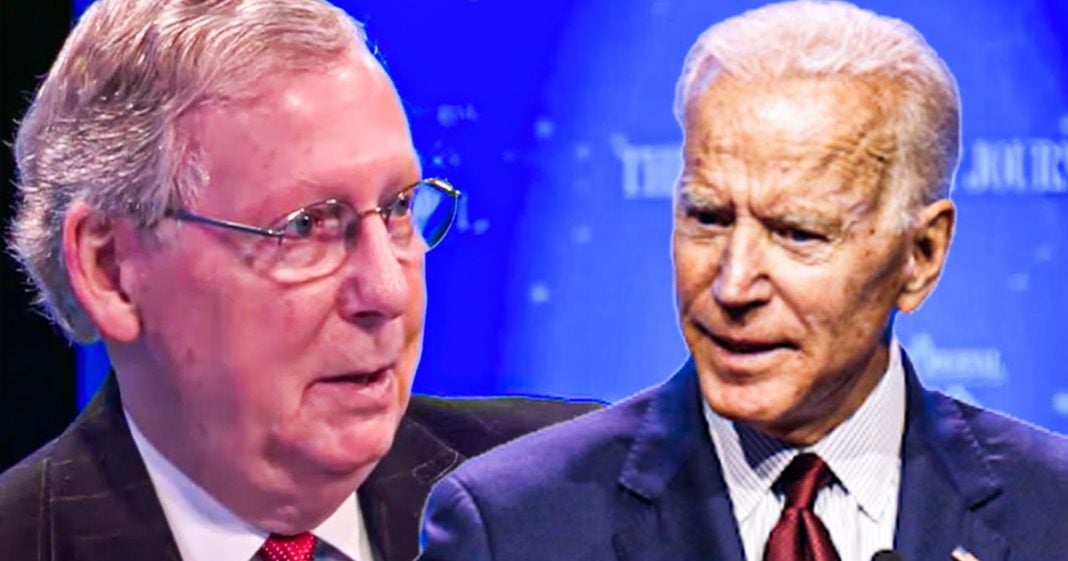 Senate Minority Leader Mitch McConnell was asked by reporters recently about the infighting taking place in the Republican Party. Instead of actually addressing that issue, McConnell said that his only goal is to “stop” the current administration. This is the leader of the Party that some Democrats, like Joe Manchin, believe they can work with, but here he is explicitly saying that he will not let that happen. Ring of Fire’s Farron Cousins discusses this.

Mitch McConnell was recently asked about all of the infighting in the Republican party taking place throughout Congress. You know, you have the never Trump people, the pro Trump people, everybody’s fighting. Liz Cheney could be ousted. Who knows what’s going to happen. It’s crazy times. So reporters asked Mitch McConnell, hey, what do you think of this? What are you going to do about it? And this is Mitch McConnell’s response to that question. Take a look.

Mitch McConnell:             One hundred percent of my focus is on stopping this new administration.

McConnell doesn’t care about the fighting. He doesn’t care about the Liz Cheney versus Kevin McCarthy. He doesn’t care about the Marjorie Taylor Greene’s or the Lauren Boebert’s or the Matt Gaetz scandal. Nah, Mitch McConnell is laser focused on one thing, the thing he said in that little clip, making sure that nothing that Joe Biden does is successful. That is the state of politics today. And to be honest, it’s been the state of politics for what, at least a 13 years now, at least, going all the way back to the very beginning of the Obama administration. When Mitch McConnell had that closed door meeting with other Republicans where they talked about ways to make him a one-term president, ways to obstruct his agenda, ways to make sure that nothing he did was successful. Well, here they are and they’re doing it again. These same people, the Republicans, that other people like Joe Manchin think they have to work with.

Think that, oh, well, I can get through to them. Oh, I can be their friend. Oh, I can get them to support these Democratic measures. Bullcrap. Mitch McConnell just said it. You heard it straight from the turtle’s mouth that he is not going to do anything to benefit this country. And the real irony here, folks, to be honest with you is the fact that Mitch McConnell Senator for Kentucky for nearly my entire life and I’m pushing 40 in a couple of years, has done nothing for his home state of Kentucky. Those are the people that end up suffering the most, same thing with Joe Manchin, by the way, in West Virginia. Kentucky and West Virginia, some of the most polluted States here in the United States. Kentucky has the highest cancer rate out of every state in the nation, because of all the pollution and Mitch McConnell says, I’m not going to do anything to benefit anybody, except for me, Mitch McConnell, because I am that partisan. I am that evil. I am that corrupt that I’m just not going to let it happen. And let’s not forget, this is the start of a six year term for him because he just won reelection back in November.

And this guy has pledged on camera right there for the world to see that he is going to obstruct at every possible turn. He is going to make sure that Democrats cannot be successful and therefore the American public cannot be successful. This is sick, it’s petty and it shows you how disgusting our partisan politics has become here in the United States. Believe it or not, and I know a lot of people and hey, look, I’m no, not afraid to take shots at Democrats when they deserve it. But right now the Democrats are actually working on some great things. And yet we have the other party that says, nope, doesn’t matter what it is. You could introduce the puppies are cute act declaring that hey, puppies are pretty cute and McConnell would obstruct it because it was Democrats who put it forward. It doesn’t matter what they do. He will obstruct it and he will make his party obstruct it. That is his stated goal. And to the people of Kentucky, if you get another chance to vote for this guy, please don’t because as I pointed out, you’re suffering more than most people in this country, from the policies that your guy that you keep sending to DC is obstructing.