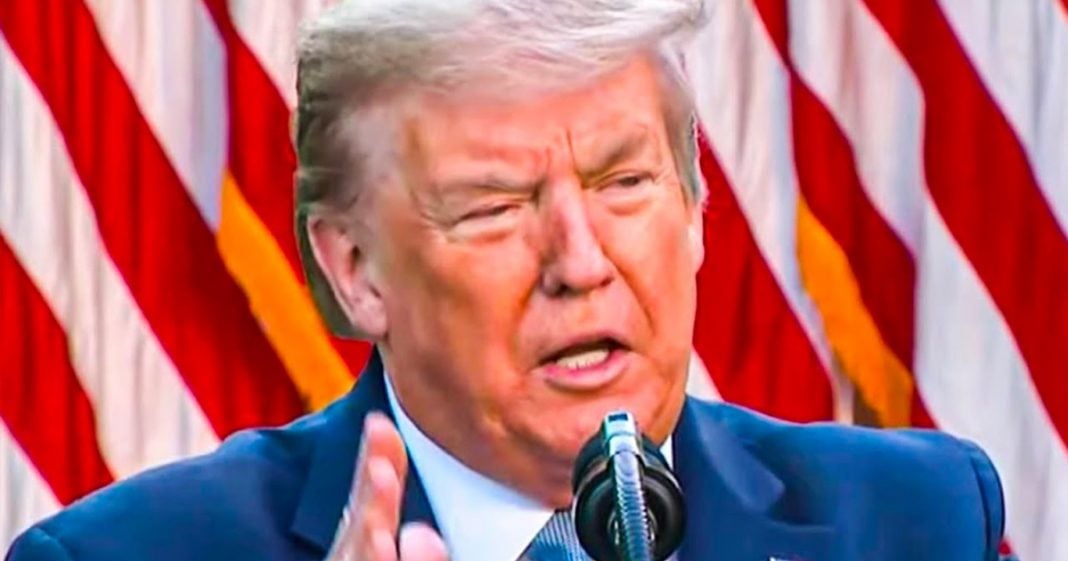 Donald Trump’s lawyers filed a motion in court this week asking the judge to punish Democrats who filed a lawsuit against Trump for inciting the January 6th riot at the Capitol. Specifically, Trump’s lawyers are now saying that the Congressional Democrats who filed the suit should be made to pay all of Trump’s legal fees for filing such a frivolous lawsuit. The lawsuit is absolutely not frivolous, and this defense is just the first step in a long game being played by the Trump team. Ring of Fire’s Farron Cousins explains what’s happening.

Donald Trump’s lawyers filed a motion in court this week telling the court that Donald Trump’s political enemies need to pay up. And they mean that in the most literal sense of the words. They need to pay up, right? And the reason they need to pay up is because you have Democratic members of Congress that filed a lawsuit against Donald Trump, alleging that he incited the Capitol riot that took place on January 6th, and they want him held accountable for it. His lawyers filed a motion this week and the motion says, listen, this is so frivolous that not only do we want this thing thrown out, we also want these Democrats to cover all of Donald Trump’s legal expenses that he has incurred from this particular lawsuit. Now, that’s not going to happen. And it’s ironic that this story would come out today because just yesterday, I did a story on the same lawsuit.

Also talking about the police officers that have now sued. But anyway, talked about the fact that this is a very difficult case for the plaintiffs to prove that he actually incited the riot. Nevertheless, there are laws in place, and that is what these lawsuits, this lawsuit is based upon. You know, if they had just gone out willy nilly and said, ah, pssh, he incited a riot. Eh, you can’t really do that. But based on the laws, based on the available evidence, they were able to put together this lawsuit and they did, and they filed it. And like I’ve said, I have 100% support this lawsuit. I, I wish it nothing but success. But I bring that up to talk about the fact that Trump’s lawyers are out there saying this thing is so frivolous that you actually have to pay us money. First of all, that’s not how it works.

You’d have to go through a separate motion after case is dismissed in order to, you know, seek your, your legal fees and things like that, but you’d have to get the case dismissed first. And you’re not going to be able to do that. These plaintiffs have standing. They have the laws on their side that make it very clear what can and cannot happen. But the fact that they have the standing alone shows that this can’t actually be a frivolous lawsuit. So this motion by Trump’s lawyers, I have no doubt is going to be thrown out. But before anybody, you know, thinks that, hey, that means it’s a victory. No. Trump’s lawyers know it’s likely going to get thrown out. They knew this probably was not going to be successful. But this is kind of like the first step that they take.

Like, okay, before we even do anything, before you even formulate a defense, let’s just argue on the merits that this case can’t even go forward and see if we can just get it dismissed and we go home. That happens a lot, a lot, a lot, a lot. So this was not a surprising move by these individuals. It’s not surprising, it won’t be surprising I should say, if this gets shot down and the judge says, nope, we’re moving forward with it. So it is what it is. This story really is not that big of a story. So don’t put too much stock into this motion by these Trump lawyers. They know they put forward a motion that is going to fail, but that’s exactly what they wanted to do because it buys him a little more time to start crafting an actual defense.