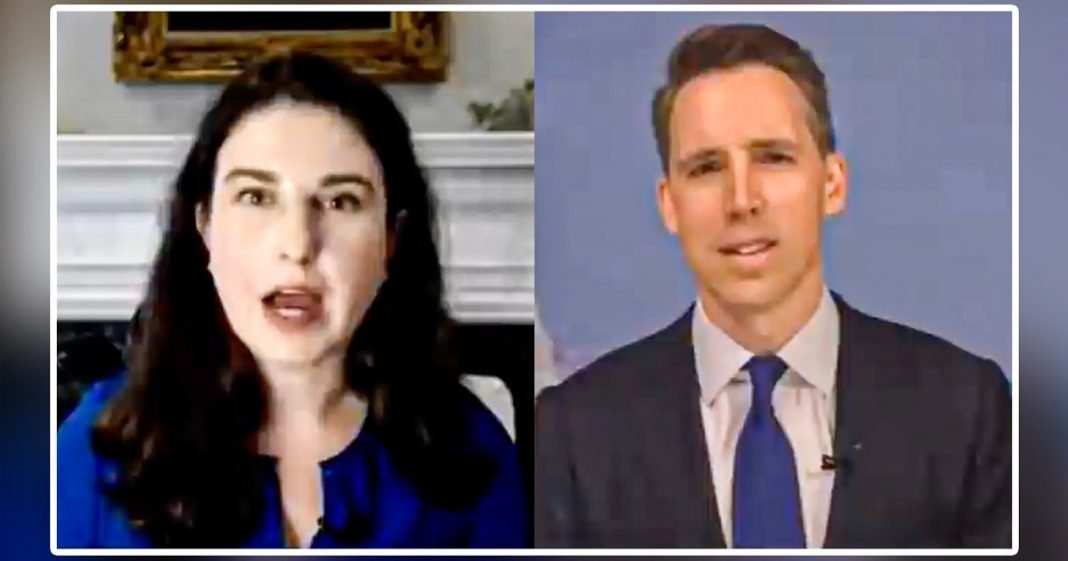 Republican Senator Josh Hawley sat down for an interview with The Washington Post recently, and during the middle of his interview with one of the largest papers in the country, he shot back at the interviewer claiming she was trying to “cancel” him. She quickly shot back that THEY were the ones hosting HIM, but Hawley’s talking points sounded far too rehearsed for it to have been a real concern of his. Ring of Fire’s Farron Cousins discusses this.

Republican Senator Josh Hawley sat down for an interview with one of the largest newspapers in the United States and immediately began whining that he was being silenced or censored or canceled during the actual interview. Take a look at Josh Hawley right here, reacting to Washington Post reporter there, Cat Zakrzewski, and how she responds when he says his idiotic little line there. Take a look at what happened.

Cat Zakrzewski:                  If you’re going to challenge this on, you know, saying that they didn’t hear the merits of the case, because there was an appeals court that ruled that the case lacked merit. So it’s difficult for a court to rule on the merits when they don’t exist. I want to get back to the point that you said. You do believe Biden is the legitimate…

Okay. So obviously her response to that was perfect. Senator, we’re hosting you. And she didn’t get mad. She didn’t get upset. She didn’t jump down his throat. She could have, I wouldn’t have faulted her if she had, but just very calmly was like, dude, you’re on our show. Like we invited you here. We’re putting you on the air. Shut the hell up with your idiotic statements of I’m being canceled on literally what might even be the largest newspapers show on the planet. Like you’re an idiot. That’s what she should have said. And I’m sure that’s what was going through her brain right there. Here’s the thing though. I watched that clip several times and it became clear what actually happened there. The way that statement flowed out of Josh Hawley’s mouth. So precise, just the order of, don’t try to censor, cancel or silence me here. There was no, he didn’t have to think about it. He didn’t have to think about saying that. And as somebody who literally does this every day, and I have to think about what I say and that’s why there’s pauses. That’s why in the middle of sentences, things like that, this dude was able to spit that line out so perfectly compared to everything else he said in that segment.

That, yeah, it seemed a little too perfect. Didn’t it? That line was rehearsed. There is no way to convince me otherwise, but I guarantee you, Josh Hawley has been practicing that line because obviously it goes in line with his talking points. You know, his book, the tyranny of big tech or whatever it’s called. I think that’s the title. This is what he does. So of course they would have to memorize these talking points. And in the middle of a sloppy tirade, he’s able to spit out perfectly without hesitation. Don’t try to censor, cancel and silence me here because he was waiting for the opportunity to use that line. And he thought he had the perfect window, but Zakrzewski shot back at him immediately and pointed out, you’re on our show, idiot. Okay. We can’t exactly silence you when we’re the ones who put the microphone in front of your face. That’s conservative victim hood though. And I guarantee you, again, I guarantee you Hawley had rehearsed that line and that’s how he was able to spit it out so beautifully in the middle of his diatribe.