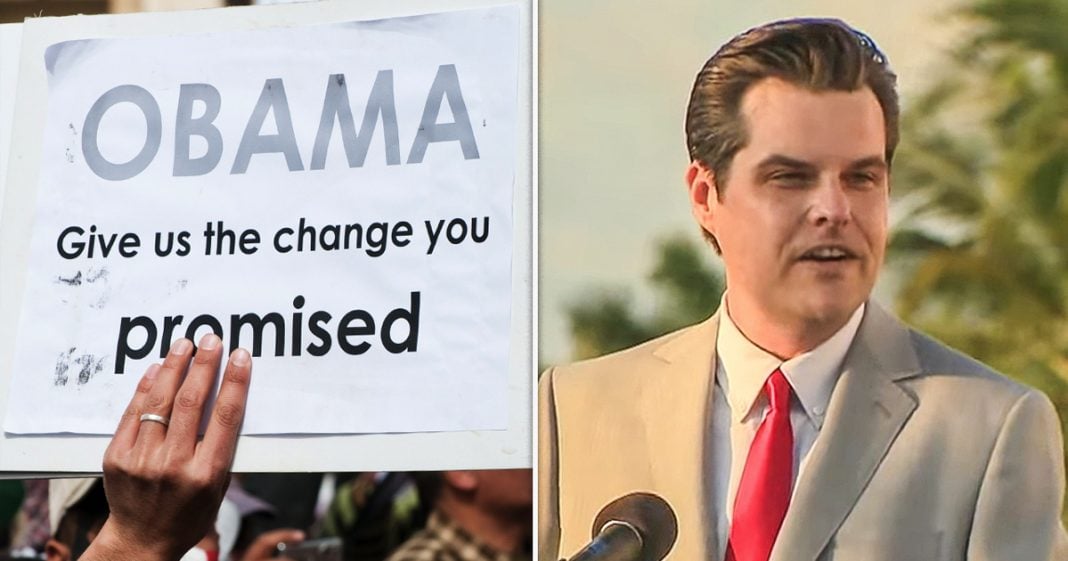 Via America’s Lawyer: Obama-era White House officials have since flocked toward the corporate sector, and many of them are now fighting against minimum wage hikes. Plus, FL tax collector Joel Greenberg is ready to spill the beans about representative Matt Gaetz’s involvement in sex trafficking, as he prepares a plea deal while being investigated by the DOJ. Mike Papantonio & Farron Cousins discuss more.

Farron Cousins:                  Well, you know, I do want to add real quick too. It’s just another person to throw in, not from the Obama administration, but you’ve got Howard Dean out there, right now.

Farron Cousins:                  Who’s actually lobbying Biden to not loosen the, the patents on the COVID vaccine so that poor nations can get their hands on it. It’s obscene what these former progressives are doing.

Mike Papantonio:             And he’s doing that so corporate America can make more money.

Mike Papantonio:             The Matt Gaetz scandal continues to heat up. So here’s the latest on what we know about the Republican representative. Wow. This gets weirder every single day. Pick up from there. I just, some of this stuff we can’t make up.

Farron Cousins:                  I, I know, every couple of days you got even more stuff. But the biggest problem Matt Gaetz has right now is that his good buddy, Joel Greenberg, the one who has been charged with somewhere between 20 and 30 counts, a lot of those including human trafficking, they decided last week, you know what, Joel Greenberg is going to try to work out a plea deal. So he’s going to start talking. And that was announced, I think it was last Thursday, and his lawyer came out that afternoon. Did a very bizarre press conference where he implied that Matt Gaetz should probably be a little scared as Joel Greenburg prepares to start talking.

Mike Papantonio:             Well this centers into Venmo, right? You got an 18 year old who’s now in the pornography business. Wasn’t at the time. You got 17 year olds involved, you got this mysterious little email that says test. We want to go forward with, you know, with, with the girls. There’s a blank, but he’s saying let’s, let’s, let’s let’s test this. Let’s see how far we can push it. You know what, he did some, he did some just really sad looking apology to the women Republican group. Did you catch any of that?

Mike Papantonio:             It was pathetic. You know, it was almost like the Richard Nixon speech, you know, I’ve done nothing wrong. You know, I, I, this is my dog. That whole, that whole, that’s what this looked like to me. It was pathetic. And the guy, I got to tell you something, you know, if I were a prosecutor, I used to prosecute, there’s so much here already, just on the surface. If a little bit of it is accurate, he’s got a problem. Don’t you think?

Farron Cousins:                  Well, he absolutely does. And the biggest problem for him obviously is not just Greenberg. It’s the receipts that we already have.

Farron Cousins:                  We already have the evidence that he was paying Greenberg to send women to have sex with him. Okay. Those Venmo receipts, and also from Apple pay that’s in controvertible at this point, we know that those exist. So it’s very difficult for him to come up with any defense as to why he was paying this man for anything. You know, there’s no logical way for him to attempt to downplay that.

Mike Papantonio:             So Greenberg. Let me call him Greenberg this week, rather than Goldberg, that I called him last week, but it’s Greenberg. Okay. So Greenberg has this cooperation agreement. Now the best way I heard a cooperation agreement is this. The cooperation is not to cooperate with the fish below you, it’s to cooperate about the fish above you. You follow me. So when you see a cooperation agreement, you go, well, you know, this is probably pretty problematic, but at this point there’s 33 counts against, as you pointed out, 33 counts against, against Greenberg and the chances of his lawyer. Look, it’s almost malpractice. It would be malpractice for a defense lawyer to tell your client don’t cooperate in this situation, because the cat’s going to prison for life. Right? So I’m sure the defense lawyer doesn’t want to commit malpractice. He says, you need to sing like a bird, put it all out there. Let’s see where this lands, right?

Farron Cousins:                  Yeah. And Greenberg’s probably still looking at life in prison. Maybe just hoping to not go to some kind of supermax type, maybe a minimum security, a little bit nicer facilities. He’s certainly not going to get the Epstein deal by any stretch of the imagination. We would hope. I mean, God forbid. But, but Gaetz on the other hand, from last I’ve seen, you know, he has picked up a defense lawyer. So he is lawyering up. He is prepared to go on the fight. He is saying, I am not stepping down. I am not resigning.

Mike Papantonio:             But at some point Farron, you’re any, any, any lawyer advising him says, shut up, shut up. Don’t talk anymore. Because you’re looking crazier by the minute. I mean, he already looks like a movie villain for God’s sakes, you know. So you’re saying you got to shut up. That’s the best advice I can give him right now, but I don’t think it’s going to help much.