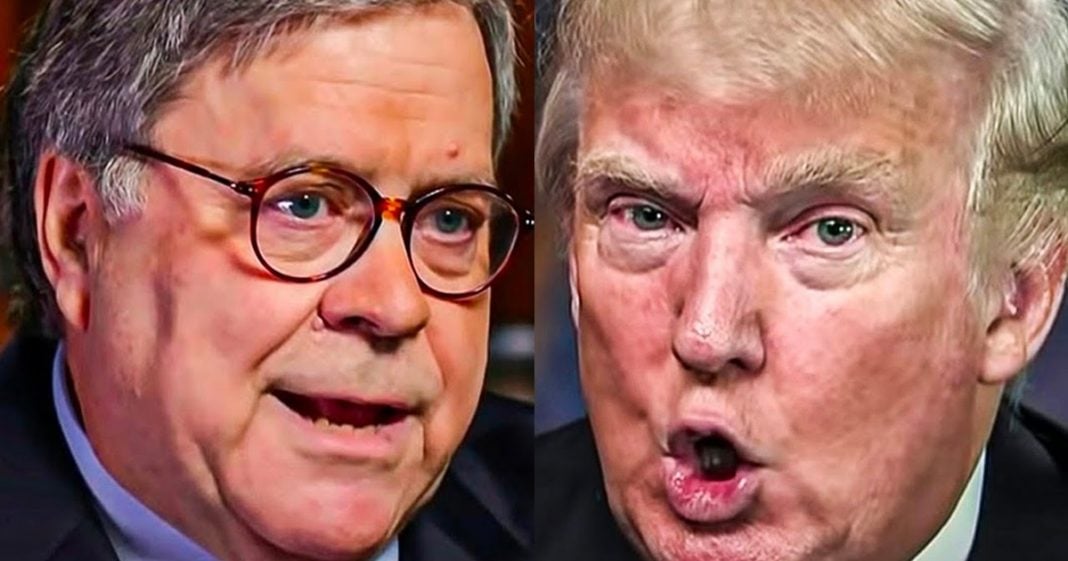 A secretive memo written by former Attorney General Bill Barr’s Department of Justice that explains their rationale for not charging Donald Trump with obstruction of justice must be released, according to a ruling from a judge this week. Parts of the memo have already been released to the public, but a FOIA request by Citizens for Responsibility and Ethics in Washington sparked this week’s ruling to have the full, unredacted memo made public. Ring of Fire’s Farron Cousins explains what’s happening.

Judge Amy Jackson this week issued a ruling saying that the unredacted portions of a 2019 memo from Bill Barr’s department of justice explaining why they weren’t going to charge Trump for obstruction of justice, that whole unredacted part, any unredacted parts that are still out there, has to be released as part of a freedom of information act request and subsequent lawsuit, which is where judge Jackson ruled by citizens for responsibility and ethics in Washington. Also known as CREW. That was a long sentence. Wasn’t it? Let me break it down a little bit better. CREW filed a FOIA request all the way back, I think at least a year ago, perhaps even longer, trying to get the redacted parts of this justice department memo released so they could know what was in there. Parts of the memo had already been released and to rewind it a little further back in case you’re not familiar with it in 2019, Bill Barr’s DOJ releases this heavily redacted memo explaining why they’re not going to prosecute Donald Trump for the obstruction of justice that was laid out in the Mueller report.

Okay. Other groups, FOIA’d pieces of it got pieces of it released, CREW was just saying, hey, we’ve gone this far. Let’s get the rest of it. Judge Jackson looked at this, she was able to actually look at the unredacted portions. And she said, yeah, there’s, there’s no reason that this should not be released to this group via freedom of information act request. This falls well within the parameters of that. There is no national secrets or anything in here that’s gonna, you know, give up the game so to speak. So yes, they have the right to do this under the FOIA laws. Now, here’s what’s going to happen. Judge Jackson has given them a couple weeks before they actually have to release it to CREW. So this thing is not coming yet. The reason she gave them a couple of weeks to do it is because she’s waiting to see if the department of justice is going to appeal this decision. And therein lies the problem for Donald Trump because this isn’t his DOJ anymore.

This isn’t Bill Barr’s DOJ anymore. This is Merrick Garland’s department of justice. Now we know the Biden administration says they don’t want to look forward, or they don’t want to look to the past. They want to look forward. The exact same thing Obama said and it bite him in the. But they’ve also said if the DOJ wants to do things regarding Trump they’re not going to interfere. So let’s hope they do not interfere. And let’s hope Merrick Garland says, nah, you know what? We don’t need to keep this thing secret. I think the public needs to know why the US department of justice decided to not pursue obstruction of justice charges against Donald Trump. Even though the Mueller report spelled it out very clearly that there was at least 10 instances of obstruction of justice. And the other part, you know, the thing that might actually make Trump worry even more is the fact that this DOJ under Merrick Garland, if they so chose, they could still actually pursue charges against the former president. Unlikely that that would happen, but it’s not out of the realm of possibility.