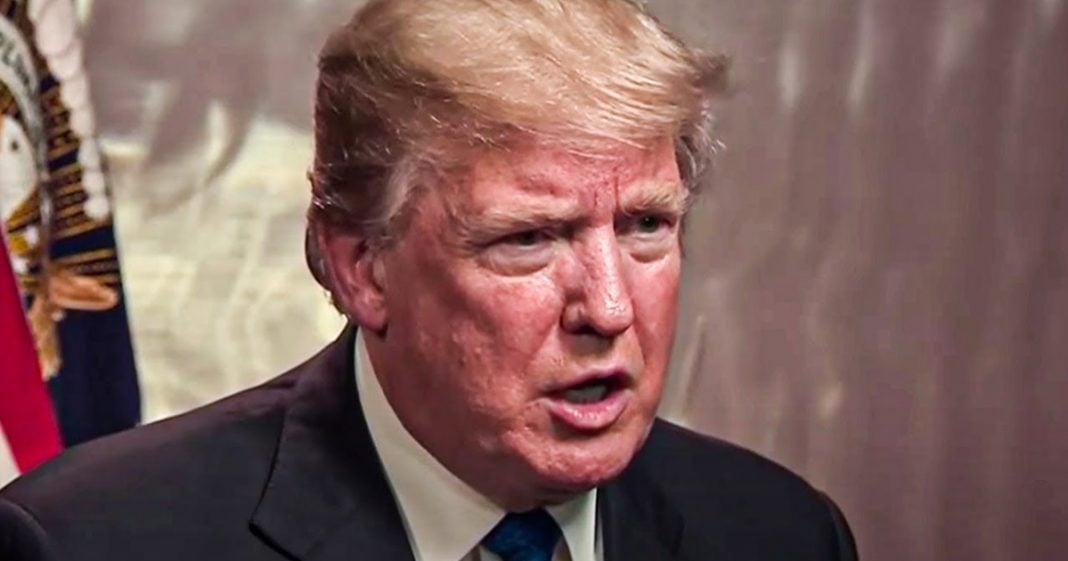 Donald Trump has officially retained legal counsel to represent him in the lawsuit being brought against him by members of the Capitol Police force. The lawsuit alleges that Trump incited the riot that took place on January 6th, and he would therefore be liable for all of the damages that the officers suffered on that day. This is a very difficult lawsuit for the plaintiffs to prove, as Ring of Fire’s Farron Cousins explains.

Donald Trump has officially retained legal counsel for a lawsuit being brought against him for inciting the riot that took place in the Capitol on January 6th. This lawsuit is being brought by two Capitol police officers who maintain that they suffered serious injuries as a result of the riot. And because they alleged in the lawsuit that Donald Trump incited the riot, he is the one that should be held liable for their injuries. And the fact that Donald Trump actually now has a lawyer working on this case for him, shows that at least to a degree, Trump understands that he could potentially face some trouble from this lawsuit. There are a couple of caveats though. You know, things we need to be aware of. This is not a lawyer working solely on this case for Donald Trump. It is the same lawyer working on the lawsuit brought against Donald Trump, basically for the same thing, allegedly inciting the riot, filed by Democratic representative Eric Swalwell.

So he’s not taking it seriously enough to hire a separate lawyer for this case and instead is having the one lawyer work on both cases, which may not be a good sign for the plaintiffs in these particular cases. And here’s why. Both cases obviously inciting the riot deal with the same facts, you know, the, the same charges. So if Donald Trump’s lawyer is successfully able to argue in one case that Trump did not incite the riot, it would stand to reason he’d be able to argue in the other case that Trump did not incite the riot, possibly even using the previous case, whichever one goes first as a good example saying, listen, judge, we already argued these same things. We were found to be not liable for this. Why are we even wasting our time here? So from a legal representation standpoint, Trump may have the edge on that.

Not to mention the fact and again, I hate to rain on anybody’s parade here. I, I do support these lawsuits. It’s going to be incredibly difficult to prove because what it all comes down to is intent. You know, was Donald Trump’s speech at that alleged stop to steel rally, that was total BS, was that an actual call to action for these individuals to become dangerous and violent? We know, we, we know. Like that, that’s the part that always bugs me is like, we do know that that’s what happened. We also have the evidence, all the reports out there of Donald Trump sitting there watching the insurrection happen and enjoying every minute of it, according to sources inside the White House, there’s plenty of reports verifying that. We also have the conversations that Donald Trump had with the House minority leader Kevin McCarthy. McCarthy said we need help. Trump delayed help. So that kind of bolsters the case.

But again, that is only negligence maybe, and probably not even criminal negligence, really just a dereliction of his duty as president of the United States. Did he incite the actual riot itself, is going to be the legal question and again, that’s going to be very, very, very difficult for even the best lawyers in this country to be able to prove because it’s all going to come down to intent. And the plaintiff’s, plaintiff’s lawyers, are going to have to prove that Donald Trump intended for that riot to take place with the words that he used. I would love nothing more than to see Donald Trump held accountable and held liable for what took place on January 6th. But unfortunately, the legal system is set up in such a way, you know, in order to prevent frivolous claims, it’s set up in a way that actually benefits the defendant in these particular instances. So again, while I support these lawsuits and I hope they’re successful, I’m not optimistic at all that they will be.