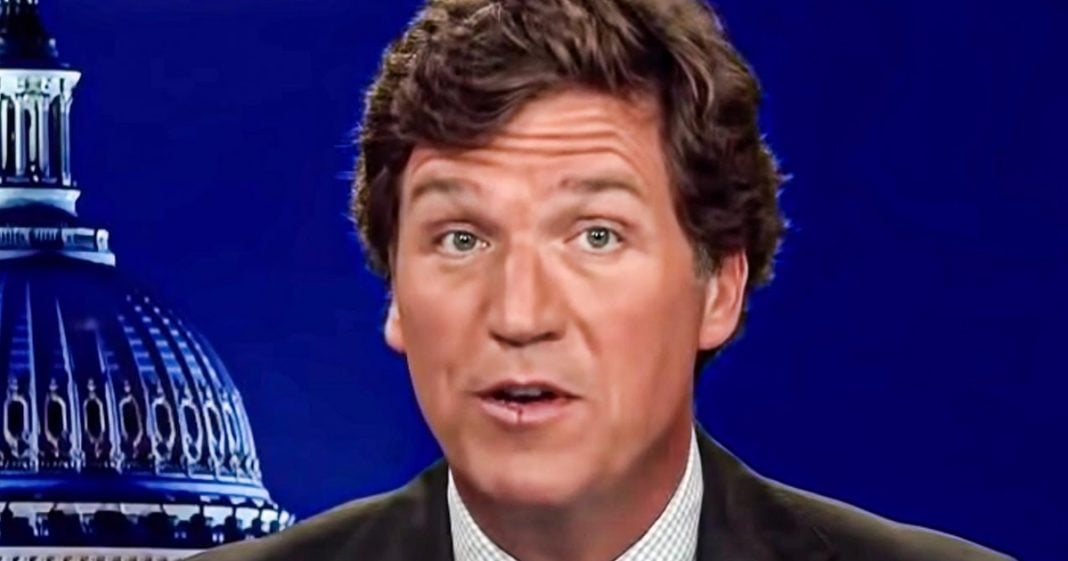 A new report by The Daily Beast reveals that staffers at Fox News have been pleading with the network to fire Tucker Carlson for quite some time, but their cries have fallen upon deaf ears. Apparently the network loves Tucker so much that even the advertising boycotts that have stripped him of most of his advertisers haven’t given executives any reason to pull him off the air because they are still making plenty of money off of him. Ring of Fire’s Farron Cousins explains what’s happening.

According to a new report from the Daily Beast, staffers at Fox news have apparently been begging executives for quite some time now to fire Tucker Carlson. Now it’s been reported for at least a year now, maybe even longer, that the staffers at Fox news have been unhappy with the direction that the network is going. Knowingly pushing false information, putting real news basically in the dumpster, and allowing these opinion hosts like Tucker Carlson and Sean Hannity, to control the entire narrative of the network. But within just the last few weeks, Tucker Carlson has put his crazy meter all the way up to 11 and has been absolutely deranged and unhinged, you know, openly embracing and spouting slogans from white nationalists. I mean, the guy has let us know who they are, and the staff, or who he is, and the staffers are furious about this. They don’t want to be associated with that. So the Daily Beast has talked to people inside Fox news and they’ve said, yes, we have, we have asked, we have begged. We want Tucker Carlson gone from the network, but they refuse to do it.

They refuse to do it even when the guy loses all of his advertisers and there’s no ad money coming in. And there’s actually a decent explanation for that and it’s one that I don’t think we had considered in the past. Tucker Carlson, as we’ve talked about, is the highest rated cable news talk show host. So number one in ratings, absolutely. That’s going to give you pretty good job security. Even if you lose all your advertisers, you still have carriers out there who have to pay the network to carry the programming. So even if this report says they’re not making enough money off the advertisers to be able to basically pay for Tucker Carlson, they are making enough money from the people who pay the carriers to run Fox news. So that advertising money, these big advertiser boycotts we’ve had, yeah, it looks great symbolically. It’s great the companies say we’re not going to be associated with this. The problem is as long as the network is carried on all of these outlets, they get paid for that.

And that is more than enough to pay for Tucker Carlson’s salary and whatever other expenses they may incur from putting him on the air. So I hate to put it this way, but they win. And the biggest, biggest thing that Tucker Carlson has going for him, according to this report, is the fact that the Murdochs love him. They love what Tucker Carlson is doing on the air five nights a week. And that fact alone, even if they weren’t making, even if they were losing money on him, they love him and they’re not going to let him go. So these staffers pleas are falling upon deaf ears. So what needs to happen? Well, I’ll tell you this. There’s plenty of outlets out there looking for good producers, looking for good writers and Fox news, believe it or not, and I’ve met plenty of them over the years, they’re good at what they do.

They may not like it. They may understand that it is morally reprehensible. But it’s a good paying job. So it’s hard to walk away. So I’m not necessarily encouraging anybody to just straight up quit and you hope they can find more, but start looking. Okay. Because you’re based in New York, right, there’s a lot of producing jobs available. Okay. You can move to a different network. You can do something that’s not going to make your stomach churn every night. And you can cut the ties with that cancer of a network. But you have to try to start making those moves because that toxic situation that Fox news has cultivated behind the scenes for years is not going anywhere. So it’s up to you staffers to be the ones to leave because that culture is never going to change. And apparently Tucker Carlson is not going anywhere anytime soon.