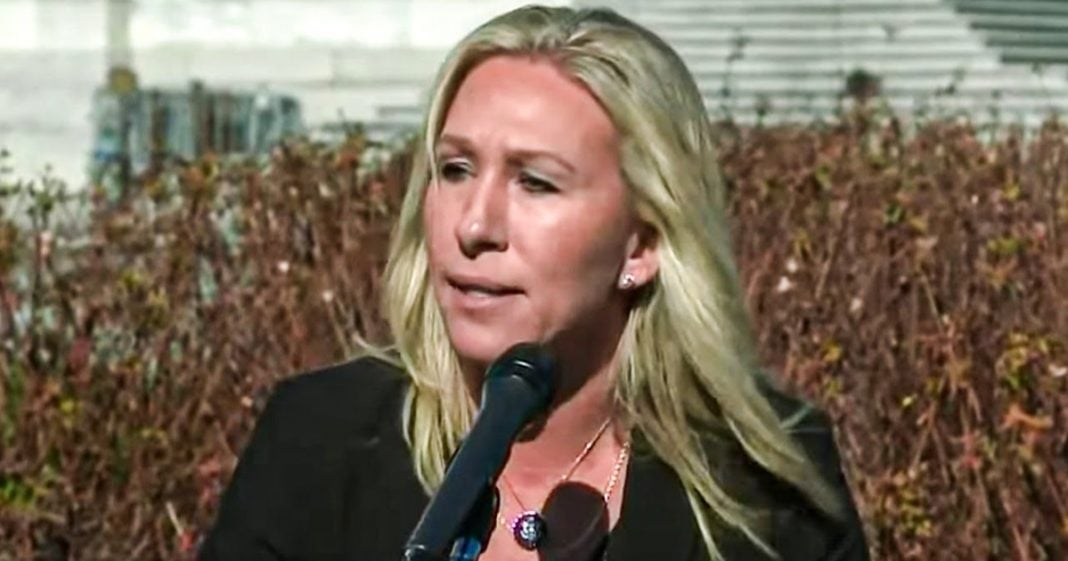 In an attack on her fellow Republicans over the past weekend, Representative Marjorie Taylor Greene made an admission that sent chills down the spines of plenty of Republicans when she said that the Party demands loyalty to Trump, and the Republicans who voted for impeachment already showed that they don’t meet that criteria. Greene is the new face of the Republican Party, and that means that the Party is already dead. Ring of Fire’s Farron Cousins discusses this.

They want America first, whatever the frick that means, and loyalty to Trump. Please Republicans, please let her maintain as the face of the Republican party. This is wonderful. She is literally out there every day, digging your grave, and y’all just sitting back letting her do it. It’s wonderful to watch. I mean, she is actually about to embark on a nationwide tour, with Matt Gaetz of all people, to go out there and attack people like Kinzinger, people like Liz Cheney, all the so-called RINOs in the party whose only crime is voting to convict Donald Trump. Her and Matt Gaetz are actually planning a tour to go out there, make as much noise as possible, attack their own Republican representatives, and basically continue to make themselves the faces of the Republican party, Marjorie Taylor Greene and Matt Gaetz, a match made in hell.

And those are the two faces that Republicans across the country are going to see. And I welcome it with open arms. These are two of the most deranged individuals that the Republican party has had to offer in our lifetime here. I mean, hell Matt Gaetz may not even be able to run for his current seat next year, because if all this evidence is true that we’re seeing, the dude’s going to be in jail or at least awaiting trial. So yeah, go ahead and put him out there on a tour with Marjorie Taylor Greene, who says the only thing that Republicans care about is loyalty to Trump and watch what happens to your party. Right. You may as well go ahead and climb into that, uh, coffin right now, because she is almost done digging that hole for you. Here’s the thing. If Marjorie Taylor Greene was intelligent, which she clearly is not, she would be paying attention to the polls right now.

Do you know what’s happening in the polls, Donald Trump ever since leaving office, every single poll that has come out, he has consecutively routinely lost support among Republican voters. His favorability continues to slip and now more Republicans say that they’re loyal to the GOP than they are to Donald Trump. So she is completely backwards with her little tweet there that they want loyalty to Trump. They actually don’t and they’re getting kind of sick and tired of it. So again, if the Republican party allows her to go on her little idiot tour, it’s going to continue to push more rational people out of the Republican party. And anything that pushes people out of the repub, Republican party, is something I support with all my heart.