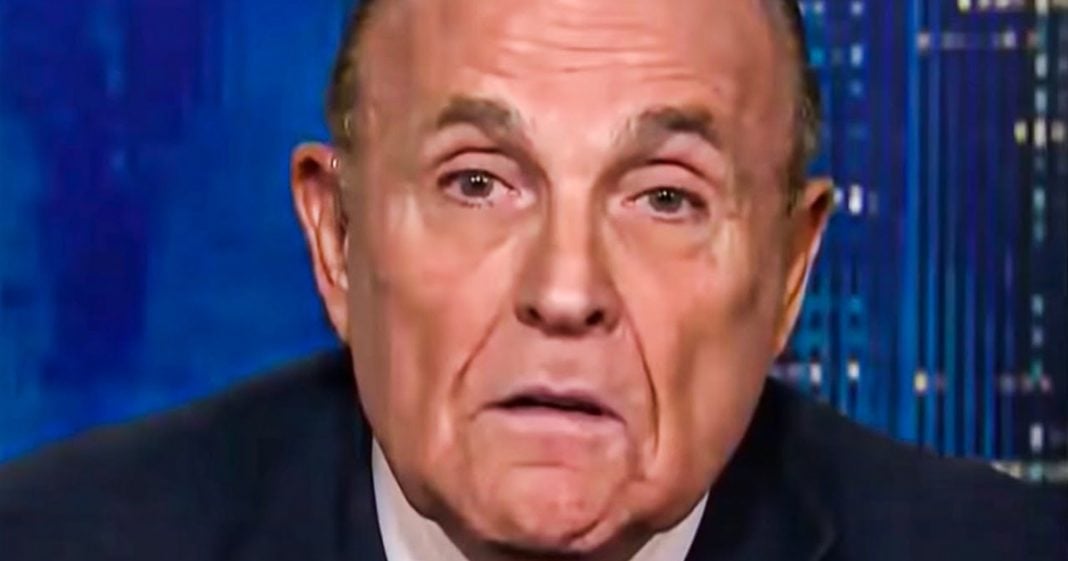 Rudy Giuliani is testing out new defenses in the ongoing investigation into his activities, and his latest talking point is that the whole thing was a setup and that he was framed. Why would anyone want to frame Giuliani? He has an answer to that, too – because he just loved Trump too much and apparently it made the “deep state” mad. The truth is that Giuliani is an idiot, and he was very sloppy with leaving evidence around. Ring of Fire’s Farron Cousins discusses this.

Rudy Giuliani went on Fox news this week and I guess he’s kind of testing out some defenses for the investigations into his activities in Ukraine. And the new defense that he tested out on Fox news was that he’s being framed because the deep state doesn’t like how much Rudy Giuliani loved Donald Trump. Here is what he had to say. They’re trying to frame me. They are trying to find something they can make into a crime, some technical violation, some mistake I made. There is no way on earth that they could have anyone telling the truth that I was acting as a foreign agent, nor do they have evidence that I tried to influence the government on behalf of citizens. But they’re doing it, he says, because of his support for Donald Trump, because he acted as Donald Trump’s lawyer and the deep state is apparently not happy with that.

So they’ve cooked up all these allegations. Like he said, some kind of technical violation they might be trying to get him for. But Rudy, I got to point out to you here, bud, and this is why you actually shouldn’t do any media appearances. If you’re saying there could have been technical violations, a technical violation is still technically a violation. Some mistake I may have made. Yeah. People go to jail for mistakes all the time, bud. You know, filing an incorrect tax document. Oops. It was a mistake. But you still get in trouble for it. Oops, I didn’t know this was private property I was spray painting. I thought it was an abandoned building. Still vandalism. So yeah, Rudy, even your defense now makes absolutely no sense. You know, Donald Trump came out late last week and said, what they’re doing to Rudy is very unfair. The raid on his house and his office. Totally unfair.

No, it’s totally fair. It is warranted and Giuliani understands this, but Giuliani has to create a narrative in the right wing media so that they don’t buy into the fact that he might be a corrupt sob. So what he’s doing is going out there, muddying the waters a little bit, making people think that, oh, maybe this is trumped up. Maybe it is fake news. But here’s the reality. In order to carry out these raids that took place last week, they had to compile evidence and by the way, there’s also a grand jury impaneled. They had to compile the evidence. They had to bring it to a judge and say, listen, we believe that there is evidence and information within Giuliani’s residences, that would be vital to this investigation. And we fear that if we do not get our hands on it, this evidence could be lost or destroyed. Or we may not be able to make the case that he committed the crimes if we lack this evidence. We need a warrant to be able to go in there.