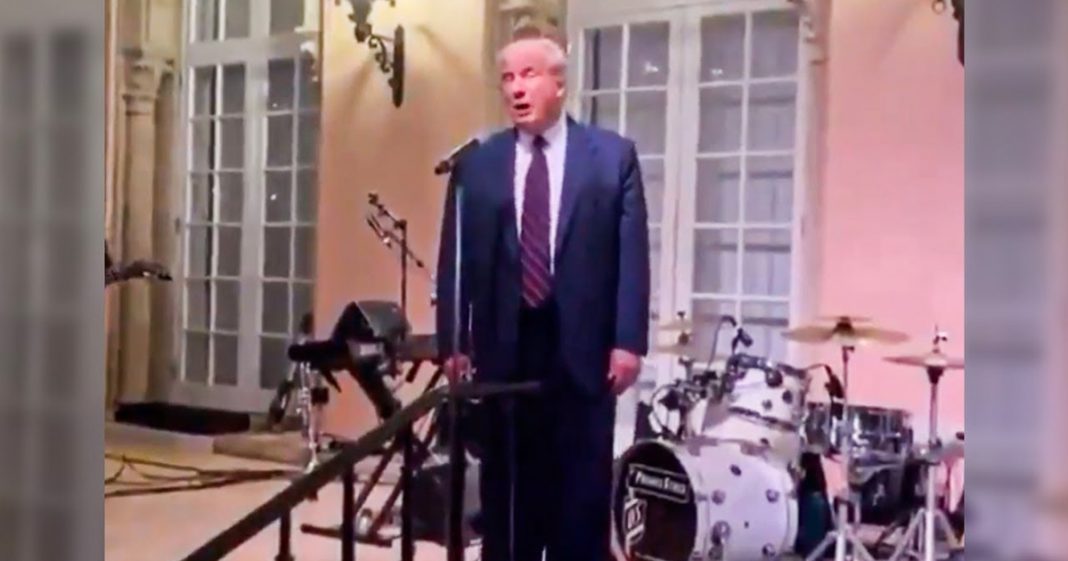 Typically when they leave office, there is such high demand for former presidents to speak at meetings or other functions that they are able to charge upwards of half a million dollars for just an hour of their time. That isn’t the case with Trump – he’s giving it away for free and still nobody wants to listen. Video emerged this weekend of Trump standing on a stoop at his resort and ranting to a seemingly-bored crowd about how the election was stolen from him. Ring of Fire’s Farron Cousins explains what’s happening and why it is so pathetic.

This past weekend, Donald Trump, the former president of the United States was so desperate for an audience that he went out on a little stoop at his resort. Spoke to a couple dozen, uh, looking the seemingly bored individuals and ranted and raved about how sad it was that the election was stolen from him. Take a look at the former president of the United States, giving the most pathetic speech to one of the weakest crowds I think I’ve ever seen. Here it is.

Donald Trump:             Let’s see what they find. I wouldn’t be surprised if they found thousands and thousands and thousands of votes. So we’re going to watch that very closely. And after that, go watch Pennsylvania and you watch Georgia, and you’re going to watch Michigan and Wisconsin, and you’re watching New Hampshire. They found a lot of votes up in New Hampshire just now. So that, because this was a rigged election. Everybody knows it. And we’re going to be, we’re going to be watching it very closely. But start off by you just take a look. It’s on, it’s on closed circuit. I guess it’s all over the place because everyone’s talking about it. Yesterday, front page of the New York Times, they didn’t want to write it, but that’s because they thought they were going to have a negative decision that the judge gave them, gave us a positive decision.

You know, typically when a president leaves office, they have offers out the wazoo for them to come speak at engagements. You know, whether it’s corporate things, whether it’s political things, you know, colleges, universities, international meetings, they want these former US presidents to come and speak at them and they will pay hundreds and hundreds of thousands of dollars just for these people to come and make a 45 minute speech. And here we have Donald Trump sitting on a couple of steps at his own hotel, giving it away for free and still nobody wants to hear it. I mean, yeah, sure. There was a little bit of enthusiasm among that crowd of again, maybe three or four dozen people. Like yeah, oh. But it didn’t sound genuine, right? Like they knew that what this guy was saying was totally not true. And that’s the point, like that’s where we’re at here. But Donald Trump, once again, confirmed what I’ve been saying since a few days after the election, which is we’re going to hear him say these same things every single time he speaks till the day he dies.

He will never get over this loss. It will never sink into his head that he genuinely lost the election. As his own niece pointed out, he has gas lit himself to the point where he believes his own lies. In the early days of the aftermath of the election he didn’t think this was real, but he repeated it enough that now he does. And now he’s drilled it so far into his own psyche that this is literally the only thing this deranged individual is capable of speaking about every time he gets in front of a microphone. What we just saw was absolutely pathetic. This is a man that used to be so powerful he could order a nuclear strike anywhere on the planet and nobody could stop him. And now look at him, standing there with his weird Trump stance. Acting like his butt protrudes so far, like it’s his first day of standing lessons, ranting and raving about something that every non-crazy individual in this country knows is a lie. That is what Donald Trump has been reduced to. And nobody deserves this more than he does.