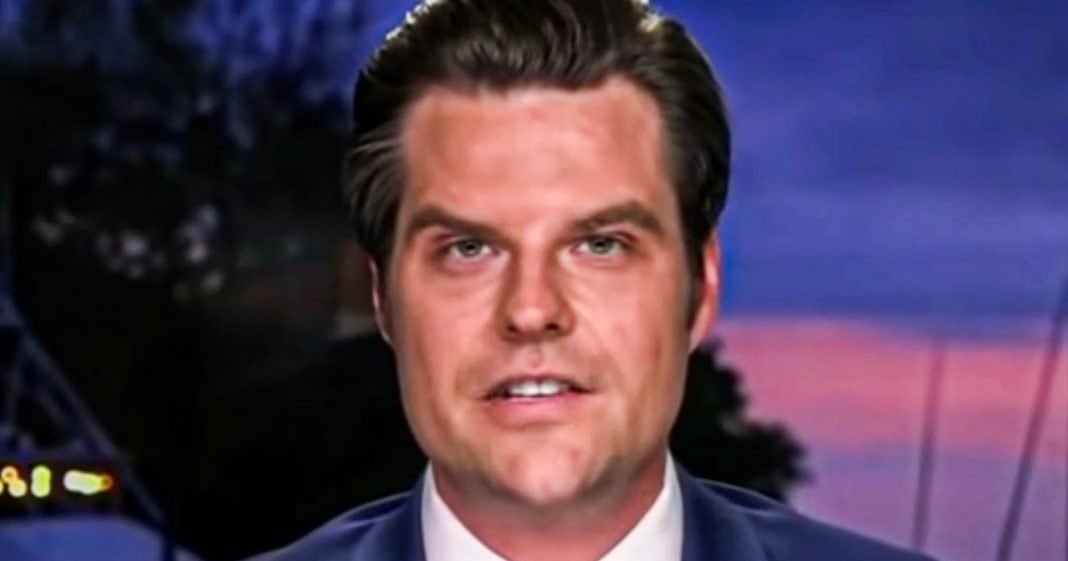 Lobbyists in the state of Florida have been advised by their firm that they are to avoid the issue of Matt Gaetz and his scandal no matter what, and that they had better not talk to the press about it, even if they are asked directly. Gaetz can’t afford to continue losing friends like this, but these moves show that the scandal is beginning to really sink in with those on the Right. Ring of Fire’s Farron Cousins explains what this means.

Lobbyists in the state of Florida, according to a report by the Tampa Bay Times, are being ordered by their firms to stay away from Matt Gaetz. Not just physically stay away from the person Matt Gaetz, I would totally get it if they said, hey, make sure you’re not within like 50 yards of him, but they’ve gone as far as to say, not only like, don’t go physically near him, don’t talk about him. If you are approached by a member of the press, these firms are telling their lobbyists here in the state of Florida, and they asked you for a comment about Matt Gaetz or this ongoing scandal investigation, whatever you want to call it, they’re being told to not give a comment, stay away from the issue of Matt Gaetz. Don’t get involved. So now here in the state of Florida, Matt Gaetz’s home state, where daddy has all of the power, where he rose the ranks and became our congressman.

You have Republicans in our state legislature that are refusing to talk about him. You have Democrats in the state legislature that are avoiding the issue too. And now you have the lobbyists who are being told, yeah, we really can’t touch that subject here. Uh, this is bad. This is really bad for Matt Gaetz. The guy has absolutely no friends or allies left. Certainly not any friends or allies that are worth a. Sure he’s got Marjorie Taylor Greene. See how far that takes you. He’s got Jim Jordan. Um, if those are the two people in your corner, then your corner sucks and you’re really in worse shape than you think if that’s what your corner looks like. So yes, the guy is in trouble. The scandal is deepening. The Daily Beast continues to tease that there is a lot more to come. They have the receipts.

The public has seen this. Gaetz is spending hundreds of thousands of dollars here in his home district, trying to run ads saying the whole thing is a hoax perpetrated by, I guess, CNN is who he’s attacking in these ads. None of it’s working and it’s not working because the evidence is one, so overwhelming and the accusations are, are basically so damning that the guy can’t weasel his way out of this one. And by the way, this has now gone even further. It’s no longer just looking into potential trafficking or relations with a minor. They’re now following another thread here in the state of Florida with this investigation, to see if Matt Gaetz may have abused his power with the Florida medical marijuana industry, you know, giving out favors for that.

So, so that’s a whole nother thing that has evolved from this other investigation. They’re looking at everything Matt Gaetz has ever done. They are looking at every connection that this man has. And if he thinks he can weasel his out of it with a couple of snappy ads about how bad CNN is, then he clearly is not taking this thing as seriously as he needs to. This is not just career ending stuff that Matt Gaetz is being investigated for, this is hard prison time for a couple decades type stuff that Matt Gaetz is being investigated for. That is why they’re being told to stay away from him. Don’t go near him. Do not discuss him. Do not get yourself roped into this because that is what these lobbyists are afraid of.