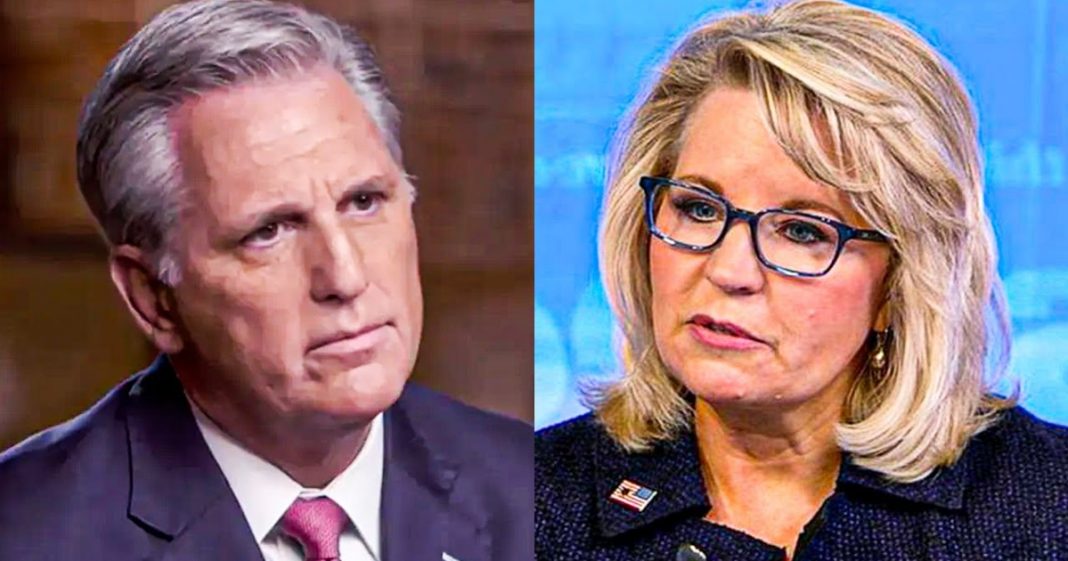 A new report says that House Minority Leader Kevin McCarthy has asked Republican Representative Liz Cheney to “tone down” her rhetoric about Donald Trump, but she is refusing to do so. The fact that McCarthy would even have that conversation – or even that thought – shows how beholden the entire Party is to Trump, even though he has plunged them into near-complete irrelevance. Ring of Fire’s Farron Cousins discusses the problems that the Republicans have as they try to move forward to the 2022 midterms.

Politico published an article this week, where they did interviews with both house minority leader Kevin McCarthy and Republican representative Liz Cheney, because the two kind of have a bit of differing opinions on Donald Trump now. Now, rewind about three months ago, they both had the same opinion of Donald Trump. Donald Trump was off at Kevin McCarthy. Kevin McCarthy said Donald Trump bears responsibility for what happened on January 6th. Liz Cheney obviously supported the impeachment. So yeah, even though McCarthy didn’t support the impeachment, their opinions of Trump were both right there on full display. They both were unhappy. McCarthy has changed his tune, as we have discussed. He is now saying, ah, Trump wasn’t all that bad on the day. He, he did what he needed to do. He was a good guy. We were in constant contact. Sometimes he’s just mad at me, but he’s not right now. Whereas Liz Cheney still thinks Trump is a cancer on the party and needs to be expelled.

And she’s not wrong about that. But according to this report, Kevin McCarthy recently asked Liz Cheney to stop being so darn mean to Donald Trump. And obviously Liz Cheney has not stopped being so darn mean to Donald Trump. So good for her. It’s the only good thing you’ve done in your life, Liz. So keep it up. But here’s the thing. McCarthy going out there, not only trying to rewrite the history of what happened on January 6th, but now we’re finding out he’s like telling people like Liz Cheney to, hey, you got to tone down your rhetoric on Donald Trump. We gotta be a little nicer. Where is your backbone, Kevin? Where is it? Did you give it to Trump? Did he take it from you? I mean, for the love of God, dude, the guy has no power whatsoever. A new poll out this week shows that his support among the Republican party has now fallen to 44% and half of Republicans now say they would support the Republican party over Donald Trump.

His support is plummeting and it has every single month, poll after poll, consistently. And for the first time, since 2019 more Republicans say they’re all about the party than are all about Trump. Kevin, the wind is at your back dude. Like you could not be in a better position right now to move your party in the direction that it needs to go to not face obliteration. And you’re refusing to do it. You are leading the Republican party down the path of destruction and more power to you, buddy. Because that’s what needs to happen. Like that is literally what has to happen at this point. The Republican party cannot be remade. It cannot be salvaged. It cannot be turned into a workable party for the American public. So let it die. So follow Kevin McCarthy down that dark and twisted path wherever he leads you. That is my advice to the Republicans because otherwise you’re just going to continue to limp along until a Marjorie Taylor Greene comes and destroys the party for you. Go ahead and let Kevin do it. Let him take the blame and let him be remembered in history as the guy who was so gutless, he couldn’t stand up to the loser that is Donald Trump.