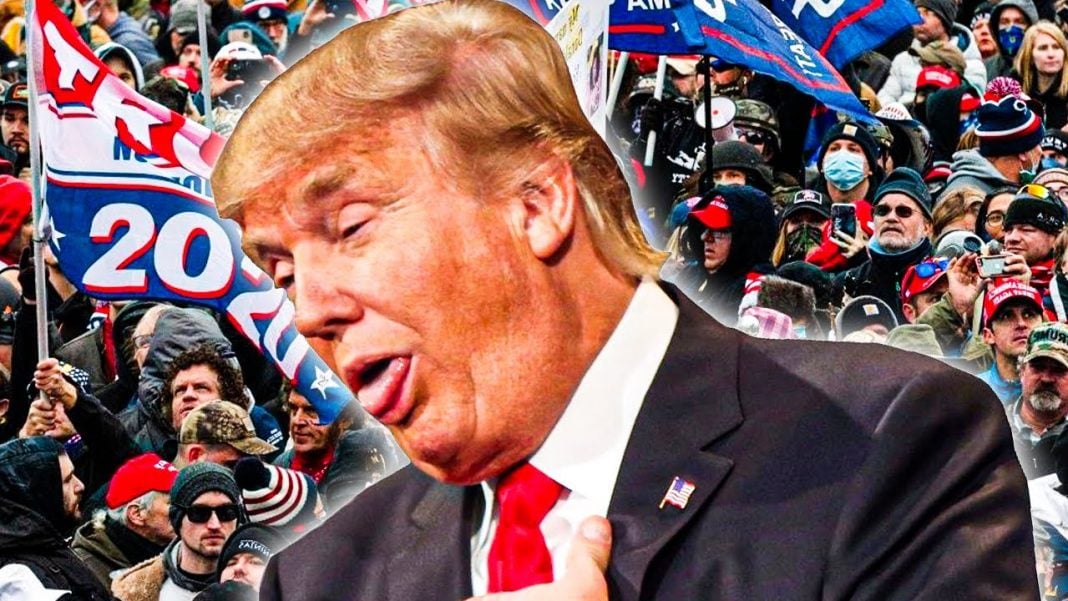 Many of the rioters that took part in the January 6th insurrection at the Capitol were absolutely shocked that they were taken away for their involvement. But extremism experts spoke with MLive.com this week and explained why many of these MAGA folks were so surprised to be arrested and charged, and why they thought that they could get away with posting pictures and videos of the event on social media without any consequences. Ring of Fire’s Farron Cousins discusses this.

We’ve seen a lot of the MAGA rioters that took place in the January 6th insurrection respond with shock when they were actually arrested for their activities. They, they’re furious that the photos and videos that they posted of themselves storming the Capitol resulted in their arrests. Now, we’ve obviously talked about this. Everybody’s talked about this. You know, it’s pretty stupid. Like if you’re gonna to commit a crime, which you shouldn’t commit a crime anyway, but if you’re going to commit a crime, please don’t post videos and pictures of yourself online, committing the crime. You’re, you’re going to get caught. That’s what happens. Yet, these people were so shocked, absolutely dumbfounded, that the photos, the videos and yes, even just being there inside the Capitol, got them arrested. Now at the time, we kind of chalked this up a little bit to stupidity because let’s be honest, it’s stupidity.

But extremism experts from the University of Michigan think that it’s something else. And they, they did interviews this week with Mlive.com. This is what Sam Jackson professor at the University of, at Albany, excuse me, who studies anti-government militias. This is what he said. I think a lot of it has to do with the folks who participated, feel like they weren’t doing anything wrong, probably combined with a sense that they thought they were doing something historic. You have another professor. This is the one from University of Michigan who said, the people who went to the Capitol trying to quote, stop the steal, by and large expected that they were going to succeed at that and thought that they would really push the government to make different decisions. Some of them didn’t realize the seriousness with, with which storming the Capitol would be taken. So, okay. I mean, those could be fancy words of saying these people are idiots.

I don’t want to put words in the mouths of the experts, but let’s examine their points real quick. Okay. They thought they were going to be successful. So of course, when you think your, your effort to overthrow a government is going to be successful, obviously you do not think there will be any punishment at all, because you’re going to be the victor and you’re going to be the one doling out the punishment. So that would make sense, right? They believed they were doing something historic, you know, a bunch of these folks really did consider themselves to be a bunch of MLK’s going up there, marching for change, except the change they wanted was to overthrow the United States constitution. So they kind of believed they were martyrs, I guess, you know, putting themselves on the line in order to make the country what they wanted it to be.

Unfortunately for them obviously, but fortunately for the public, that didn’t happen. What were some of the other claims? They didn’t realize the seriousness with which storming the Capitol would be taken. And that also, I think that has a lot to do probably with the mob mentality. You know, obviously look, there’s hundreds and hundreds and hundreds of people here. Clearly they’re not going to arrest us all and put us in jail and put us on trial. That’s just crazy. There’s hundreds of us. We’re just going to do this. We’re going to do our thing and then we’re going to walk right out and everything’s going to be fine. Um, so yeah, I think the mob mentality has a lot to do with that. And while I do agree with a lot of what these experts say, and there’s even more than that, but they’re all kind of similar things.

I think at the root of it is stupidity. These people were idiots who had been conned by a charlatan, you know, worked up by an absolute con man to do his bidding. That’s what happened. And Trump was not the only con person there, con artist, I guess. You had Trump Jr. You had Rudy Giuliani. You had Ali Alexander. You had all of these people telling them what they were doing is right. And when you take somebody that doesn’t have such a good ability to reason and rationalize for themselves, and you tell them that this is the right thing to do, go do it. The results are exactly what you would expect. Which is why those individuals who instigated this, who incited it, they’re the ones that need to suffer the harshest punishments for it.