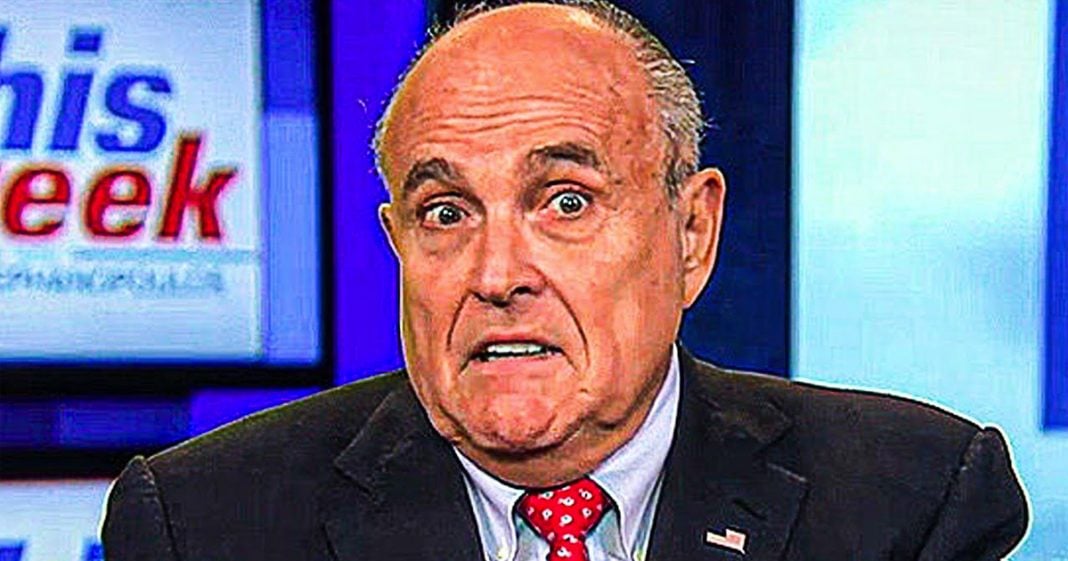 Rudy Giuliani had two of his residences raided Wednesday morning, and many of his electronic devices were confiscated during the raids by the feds. To make matters worse for the former New York Mayor, a grand jury has also been empaneled, a sign that prosecutors are building an exceptionally strong case against Giuliani and that they are compiling a ton of evidence. Ring of Fire’s Farron Cousins explains what’s happening.

Oh, Rudy, Rudy, Rudy Giuliani. Right. As I’m sure everyone is aware by now, yesterday at 6:00 AM the FBI conducted raids on two of Giuliani’s properties, a park Avenue apartment, and an office in downtown Manhattan, where they seized multiple electronic devices from the former New York city mayor, including his cell phone. This is part of the investigation taking place to see if Rudy Giuliani was in fact working as an unregistered foreign agent. His good buddies Lev Parnas and Igor Fruman have already been taken down in this particular scandal. And so now it’s obviously for a long time now has reached its way up to Rudy Giuliani. That investigation is ongoing, had been quiet for quite some time, actually, probably about a year. And then all of a sudden yesterday, Wednesday, they said, you know what, let’s go ahead and make a move. This is a huge development in this particular case.

And by the way, not just because of the raids and seizers, we also found out yesterday that a grand jury has been impaneled in this particular investigation. That tells us quite a bit and none of it is good for Rudy Giuliani. It means that they already, at this point, had enough evidence to perga, uh, begin, excuse me, presenting it to this grand jury. Also, in order to get the warrants to conduct these raids, they had to show probable cause to a judge. And the judge had to determine whether or not probable cause existed. Obviously since the raids were conducted, the judge said, yes, I agree with your claims. I agree that there is probable cause that a crime was committed. So have at it. Rather remarkable, right? Not just the fact that this happened, but just the entire Rudy Giuliani saga. You know, the guy goes from being a mediocre mayor of New York city to suddenly person of the year, for time magazine, after the 9/11 attacks.

You know, he is credited with guiding New York city through that, but really all he did was be the mayor at the time. So, you know, he was a hero. Then he ran for president and everybody said, no, we actually don’t like you that much. Threw in his lot with Donald Trump and then basically ruined his entire life by doing that. Because see, that’s the thing, Rudy Giuliani could have just disappeared. Hell he could have even gone back into private law practice, which he actually did for a little bit. But instead he decided, I’m still ambitious. I still want more. And Donald Trump is going to be my ticket. Well, Trump has in fact turned out to be his ticket. It’s just not to a place that Rudy Giuliani actually wanted to go. And that ticket may end up taking him all the way to prison at this point, given what we’re seeing happening right now with this investigation. The materials that were seized by the FBI yesterday will be presented to the grand jury after they have been thoroughly dissected, essentially, by the federal authorities.

They’re going to take anything that they have in there. Give it to this grand jury that’s going to decide whether or not we’re going to indict Rudy Giuliani, officially. At that point, he will face charges and have a trial. That’s basically where we’re at right now. It is likely and probable that Fruman and Parnas, who I mentioned earlier, are cooperating with this particular investigation in order to get reduced sentences, perhaps in order to not get deported. So they could easily throw Rudy Giuliani under the bus. We obviously have plenty of video and photographic evidence showing that Giuliani was good buddies with these individuals. We already have other communications showing that Giuliani was in fact working with officials in the Ukraine, trying to get dirt on Joe Biden and Hunter Biden and all of that. So yeah, the evidence already is overwhelming. So whatever we get from these electronic devices or any other documents they took from Rudy Giuliani’s offices, none of it ends well for Rudy.