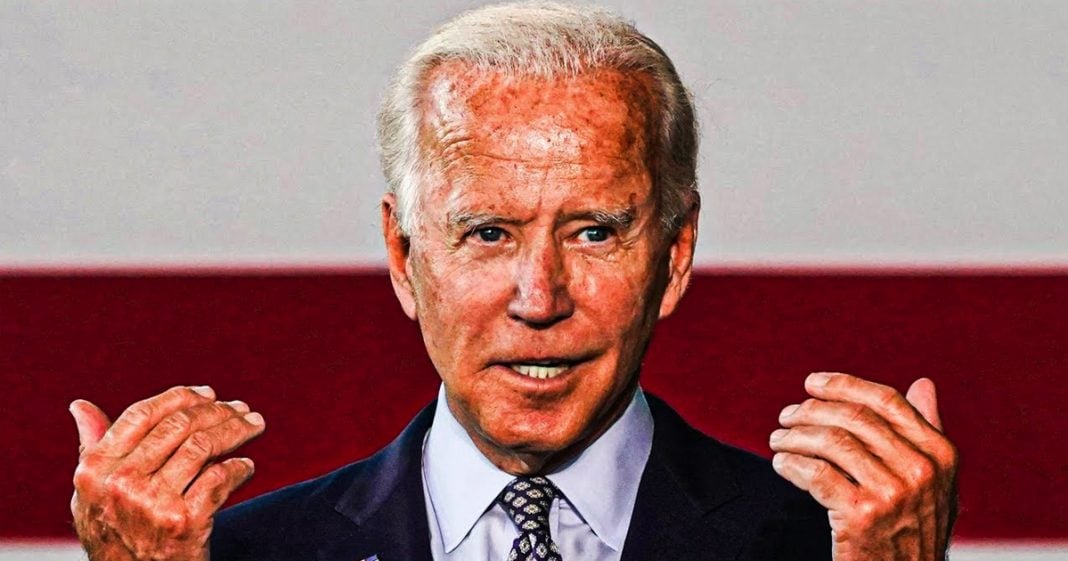 Conservatives really have nothing of substance to complain about with Joe Biden, so they continue to just make things up to fit their narrative that he is somehow “bad.” The latest round of attack from the Right are the claims that Biden is a secret socialist imposing his Bernie Sanders-like policies on a country. This couldn’t be further from the truth, but it would be awesome if it happened. Ring of Fire’s Farron Cousins discusses this.

Republicans and conservatives and talking heads, pundits, the folks over at Fox news, they’re all grasping at straws right now, trying to find a good attack against Joe Biden that’s actually going to stick. And so far they’ve been able to come up with absolutely nothing, but we are starting to see a bit of cohesion among their talking points. Yesterday on Fox news, you know, in anticipation of Biden’s address yesterday evening, they were talking about things we may and may not hear during the speech. And at one point, Brian Kilmeade actually basically said Bernie Sanders and his brand of Democratic socialism is running the country right now. Take a look at Fox news, being upset about this. Here it is.

Steve Doocy:                        He will not be including that campaign plan to raise the estate tax from 40 to 45% or lower the exemption from 11 million to 3.5 million, because there are a lot of people, particularly family farm owners, who are very concerned about that particular provision. If it went in, they would be sunk.

Don’t threaten us with a good time, Brian. A lot of us would love to see a president Bernie Sanders and get some real progressive agenda passed here in the United States. But Kilmeade wasn’t alone yesterday in saying this. We also had Republican Senator John Barrasso, who tweeted out, president Biden has turned over the keys to the White House to the far, far left wing of his party. These are the people who are for big government programs and socialism. You know, what’s really funny about this to me is one, not only is none of this true. Yes, he is doing some pretty progressive things, but they’re not hardcore progressive things, right. He’s given the progressive wing of the party a couple of bones here and there, but nothing with any real meat on it. But to his credit, he’s also doing some good things. You know, it’s not as much as we would like to see, obviously.

But hey, you can’t complain when we are making some progress here in the United States. All we can do is push in the future to make those changes bigger and permanent. Either way, when Bernie Sanders was running for president both in 2016 and 2020, all of the establishment Democrats were out there saying you can’t run him. They’re gonna attack us as socialists. They’re gonna say that we’re, we’re crazy far left individuals. Okay. Well, Biden is actually the president now, and they’re still using those same attacks that you thought would only be reserved for Bernie Sanders. Like you could put up Joe Manchin as a Democratic nominee for president, and they would still try to label him as a socialist. One, because they have no idea what that word means. Let’s be honest about that. Conservatives, Republicans, Fox news people, they don’t know what the word socialism means. Even though Bernie has given speeches explaining Democratic socialism, explaining that it’s what they have over there in Europe.

Republicans still don’t get it. They’re like, nope, it’s Cuba. It’s communism because those words are interchangeable in their vocabulary. So that’s what it is. Again, we’re getting some good policies, you know, universal pre-K would be tremendous. You know, universal childcare would absolutely save struggling families, thousands and thousands of dollars every year. You know, it’s a sick and twisted country that we live in when parents have a child and then they have to, you know, both parents have to go back to work. And one parent’s salary is only enough to cover the daycare for the kid because the other parent has to go to work. So the child has to go to daycare, but the work is only enough to pay for the daycare. I know because for a long time, early in my marriage with our kids, that’s the situation me and my wife were in. Every dime that she made was only just enough to cover our kids being in childcare.

So if we did push for universal childcare here in the United States, that would be tremendous. It would put more money back into the pockets of struggling families who could then use that money on other things that would therefore stimulate the economy. Republicans don’t seem to understand that. A rising tide lifts all ships. There’s a reason that expression exists. And that’s exactly what a lot of these programs that Biden is proposing and wanting to do would in fact do. The infrastructure package is another great thing. But in the eyes of the Republicans, they gotta attack these somehow. And the only word they have in their vocabulary to do it is socialism. Well guess what? That attack is not resonating with the American public. Hell, it’s not even resonating with their Republican base because most of them actually support these programs that Joe Biden is out there pushing. So best of luck with your socialism talking points because even your own base seems to like it.