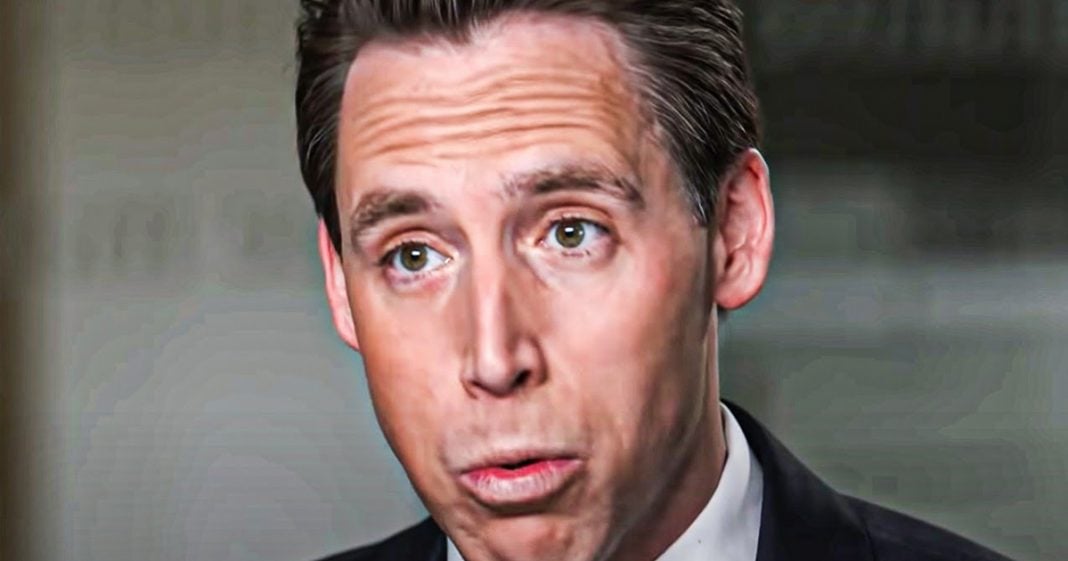 Republican Senator Josh Hawley is promoting his new book about the evils of Big Tech, but he apparently has to rely on Big Tech to sell his book. Hawley posted a link from Amazon (big tech) on Twitter (big tech) from his iPhone (big tech) to promote his book and immediately got roasted as “the village idiot” on the same social media platform for being so completely clueless about what he was doing. Ring of Fire’s Farron Cousins discusses this.

Republican Senator Josh Hawley has a new book out going after big tech, exposing all the horrible things that big tech does. The monopolies, the alleged censorship that we know is a lie. And he wants everybody to know that big tech is the enemy and he let everybody know that big tech is the enemy by getting on Twitter, which is big tech, from his iPhone, which is big tech, and tweeting out a link from Amazon, which is also big tech to promote his new book. This tone deaf moron used three different big techs to promote his stupid little book. And of course, you know, in, in true Twitter fashion, it took like half a second for everyone to jump all over him and point out his hypocrisy and his stupidicy, uh, stupidity, excuse me, stupidicy, that was a funny slip. But anyway, everybody’s pointing out the fact that yay, Josh Hawley, you’re an idiot.

Look at what you’re doing. You’re saying that big tech is the enemy yet you’re using multiple big tech platforms here to promote your stupid little book. But see Republicans are basically immune to irony. You know, we have seen that happen time and time again. But let’s talk about big tech for a second, right? Are they monopolies? Absolutely. Do they need to be broken up? Oh hell yes. Are they silencing conservative voices? No. No, they are not. Studies have proven that, by the way, multiple different studies have proven that. We have talked about them here on Ring of Fire. That’s not a thing that actually takes place. Conservatives have a greater reach. Their stories get shared in greater volumes on Facebook. They’re the Kings and Queens of big tech, not to mention the big tech money. Hell, Ted Cruz alone has taken over $10,000 from Google as he rants and raves about big tech. You know, the lobbyists from the big tech industries are out there schmoozing, wining and dining Republicans and Democrats as well.

The problem with big tech is the monopolies. The problems with big tech are the labor practices. Look at Amazon. They do need to be broken up. They do need to be regulated. All of these things have to happen, but they have to happen for the right reasons. Republicans can’t go out there and spread their nonsensical lies about conservative censorship and liberals reigning supreme on social media big tech platforms when that’s not actually the case. And by the way, even if that were the case, that’s still not even grounds to break up these monopolies. What Facebook is doing on the other hand, that’s grounds breaking up a monopoly, right? You know, absorbing all these other smaller app developers so that you get their technology. And it’s only available through your platform. Guess what? Monopoly. Or making deals with them, then stealing their ideas, putting out your own version of it and then banning them from your store. Monopoly.

Yeah. There’s lots of problems with big tech. These companies are absolutely truly evil corporations in many instances, but nowhere on that list of horrible things they do is silencing conservative voices. Yeah, Trump got banned. Oh, well. Liberals, progressives get banned all the time. Welcome to the club guys. Sucks to be on that receiving end, but there’s nothing we can do about it. But what we can do is prevent their anti-competitive practices from destroying that market. We can make them pay their workers fair living wages. We can get their workers better benefits. We can do all these things to improve people’s lives without having to lie about what the companies are doing. Like Josh Hawley is doing in his new book.