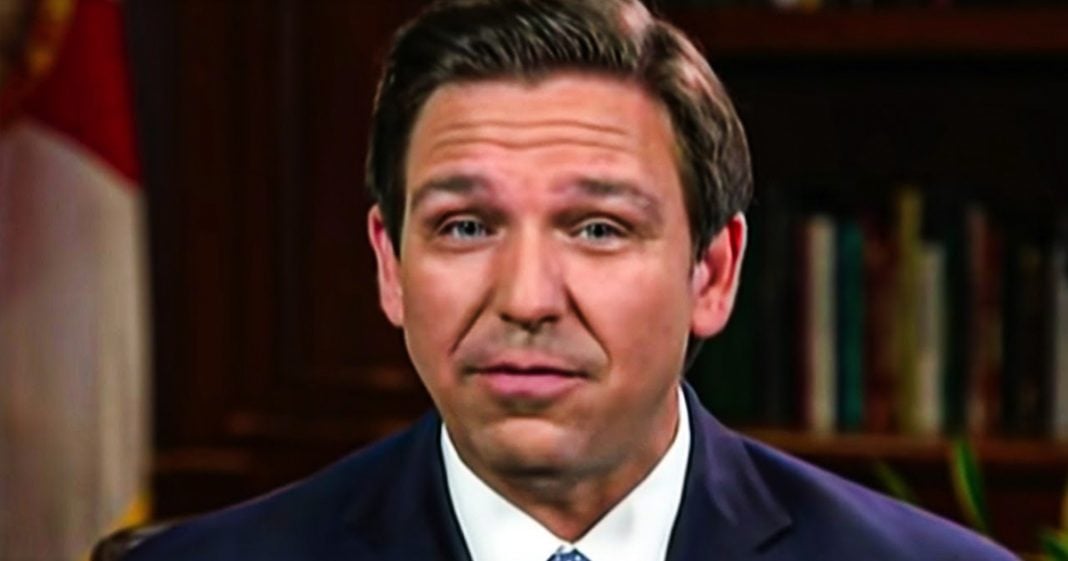 The knuckle-dragging Republicans who run the state of Florida have come up with a proposal to fine social media companies up to $250,000 per day for suspending the accounts of politicians. This idiotic idea is designed to protect just one person: Donald Trump. These Republicans believe that making complete fools of themselves will somehow endear them to Trump, but the former President has no power to impact the lives or careers of these men. Ring of Fire’s Farron Cousins explains what’s happening.

The Republicans who control the state of Florida right now are working on retaliatory legislation against big tech companies, because those same big tech companies hurt Donald Trump’s feelings. And now, according to legislation making its way through the conservative Florida government, they could be fined up to $250,000 per day for suspending elected officials from their platforms, $250,000 per day. All because these Republicans in the state of Florida want to continue to bow down to the completely powerless Donald Trump, a Donald Trump, who by the way, is actually packing up his crap right now and heading to Bedminster for a couple of months. Like literally moving out of Florida for a couple months to go live up in New Jersey. Yet these Republicans still want to kiss his butt. Still want to do whatever they can to appease him. So they’re actually working on breaking interstate commerce laws in order to fine the big tech companies for permanently suspending Donald Trump.

Now our Republican governor, Ron DeSantis, did in fact speak out against big tech companies following Donald Trump’s ban. He was furious about it, said, this is unfair. It’s a violation of free speech. But none of that is accurate. And even if this legislation were to pass and be signed by the governor, and let’s be honest, Republicans control the branches of government here in Florida. It’s going to pass. It’s going to be signed. Uh, it’s going to be destroyed very quickly by the court system. Again, these are companies that are not based in the state of Florida. So you can’t actually regulate the commerce of that here from the state of Florida when they’re based, you know, what, over in California, I guess. You can’t do that. You can’t impose fines on them for suspending your politicians who violated their own terms of service. Like you can’t do that.

You may disagree with it. You may think it’s censorship. Sure, whatever. But at the end of the day, Republicans fought for decades to give corporations the right to refuse service to anyone they want and the chickens have come home to roost. That is what is taking place here. And Republicans are furious that now they’re the ones who are getting banned from these platforms. You know, being told by corporations, we’re not going to serve you anymore. They were perfectly fine when it was, you know, a, a same-sex couple trying to get a wedding cake being denied service. They actually fought that at the Supreme Court and won. They said, ha ha, you don’t get what you want. Okay, cool. Big tech’s basically doing the same thing because you violated their terms of service. And it’s not even that many people, by the way. But Republicans in the state of Florida are just using their same old talking points, saying conservatives are being silenced on Facebook, on Twitter, on all these outlets.

Conservatives have no voice. They have the loudest voices. They have the biggest Twitter followings. They’re always the top 10 trending things on Facebook. Their YouTube channels have millions of subscribers versus only a handful of Progressive’s who have over a million. And I really think it’s what, like three. Pakman, Seder and TYT, right? So yeah, conservatives aren’t being silenced by anyone. In fact reports have actually come out to show that it’s the opposite, that the algorithms actually favor conservative voices on Facebook and they do, suppress to a degree, progressive and liberal voices. So this legislation’s not even based in reality. It’s something they don’t have the legal authority to do. But they’re pushing it just because Twitter hurt Donald Trump’s feelings.