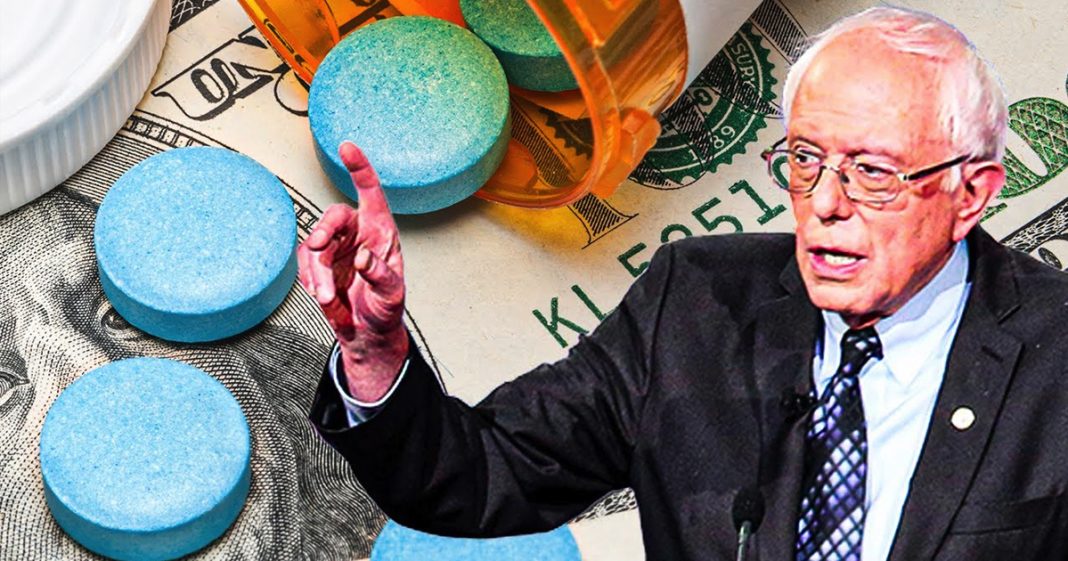 A new GAO report commissioned by Senator Bernie Sanders found that Americans are paying 2 to 4 times more for prescription drugs than citizens of other countries. There is a very simple reason why this continues to happen: Because drug companies are allowed to do it. The United States hands over all the cash and ideas they can come up with to pharmaceutical companies, and then those same companies turn around and screw over American consumers. Ring of Fire’s Farron Cousins explains what’s happening.

A new report came out this week from the government accountability office commissioned by Senator Bernie Sanders that shows that Americans pay on average two to four times more for prescription drugs than some of our closest ally countries, both Canada and several countries in Europe and of course, Australia. We are paying two to four times more for the exact same medication, and this is on 20 different name brand medications that were examined by the GAO, two to four times more than our good friends overseas. And here’s the thing. This is a story that Mike Papantonio has told many times here on Ring of Fire. I’ve told it a couple of times as well, and I’m going to tell it again because it’s relevant to this and this is something we have known again, we didn’t even need this study. We know that this happened. Mike Papantonio was giving a deposition or taking a deposition.

Um, I believe it was in Amsterdam. So he’s over in Europe, deposing a pharmaceutical executive. You know, their, their product was, was killing people. So, but that’s irrelevant to this. They won the case, by the way. Um, so he’s deposing this guy. And at the end, he, he throws in one last question. He goes, look, I, I, before we go, I just got to ask you, and there’s a video deposition of this. I’ve seen it. It’s amazing. He goes, I just got to ask you something real quick. Uh, your drug here, you’re charging X amount over here in Europe, where you’re based. But over in the United States, you’re charging. I forget what the markup was, but it was some astronomical amount. Like you’re charging 10 times more over, over in America. Can I just ask you why that is and the executive goes well, because we can, there’s nothing stopping us from doing that. You know, there’s, we’re allowed to do that. So we do it.

But it’s that answer right there, because we can, that is the root of this GAO study here. Why are we paying two to four times more here in the United States? Because we let the pharmaceutical industry charge us two to four times more and other countries aren’t doing that. They’ve got price controls, they’ve got negotiations. They’ve got all of these mechanisms in place that the US refuses to do that says you’re not going to price gouge our citizens. And here’s the kicker too, this is the other thing we know here in the United States. We’re the ones paying for all the research and development, our tax dollars. When you look at your paycheck and you see federal income tax coming out, guess what, some of that is going to pay for the research that is done to develop these blockbuster pills that you then pay four times more for than somebody overseas. So, as I like to say, we always pay for our drugs here in the United States twice because we’re the ones who are fully funding the research and development of it. Last decade or so, all of the major drugs developed have been 100% paid for by, by taxpayer funded R and D.

And then of course, we have to go to the pharmacy when we need these drugs and pay these astronomical markups. But why do they do it? Because they can. In their own words, because they can. Now there is legislation in the pipeline, Bernie Sanders is working on it, but it would put some price controls in place. And that’s what we have to have. And that’s actually why he commissioned the study. You know, you want to put price controls in place, you gotta be able to show people how badly they’re getting screwed and that’s what he’s done here. The question is, are the Republicans going to pay attention? Because their constituents are getting screwed just as bad as the liberals are. This isn’t a bipartisan issue. Are people like Manchin and Sinema going to get on board with this? Because hell, Manchin’s daughter who was the CEO of the company that jacked up the prices on the EpiPens, she actually had to testify before Congress and explain why they did that. This is ridiculous. This shouldn’t be a partisan issue, but for some reason it is. But let’s just hope for the sake of everybody, left, right and center, Bernie Sanders and his legislation is successful. So that maybe at the very least we can start paying what other countries pay for the same prescription drugs.