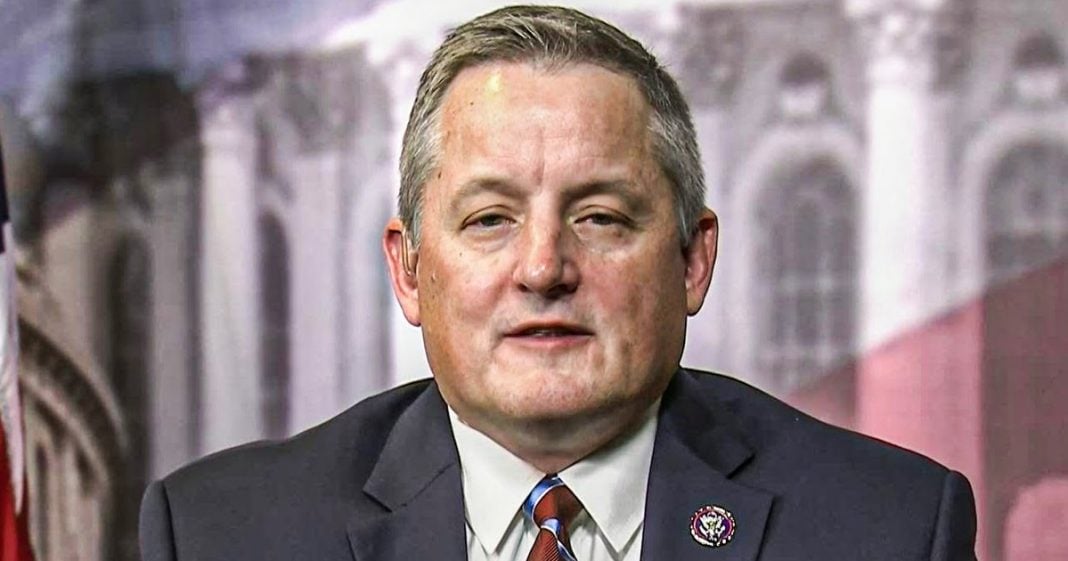 Republican Congressman Bruce Westerman from Arkansas says that he was forced to barricade himself in House Minority Leader’s private bathroom armed with a sword during the January 6th insurrection. This is important since there are so many Republicans today still trying to downplay what happened on that day and to mock those who believe it was a very serious event. Ring of Fire’s Farron Cousins discusses this.

On Monday, the New York Times published an interview with Republican representative Bruce Westerman from Arkansas, where Westerman told his story of what happened on January 6th, inside the Capitol. And it starts off fairly simple, right? Westerman says that, you know, once they were all evacuated, a lot of the Republicans went and started, you know, just congregating hanging out in Republican minority leader Kevin McCarthy’s office. But then things started to get a little more dicey. These insurrectionists made their way deeper and deeper into the Capitol. Obviously there was an individual, one of the rioters was killed by a police officer. You had a police officer unconscious. So the Republicans at that point started to take this whole thing a little more seriously and Westerman says that he grabbed a civil war sword. That was a, you know, decorative sword, but a real sword hanging on the wall. Took the sword and barricaded, his own words, in Kevin McCarthy’s bathroom, said he was crouched on the toilet holding the sword because that’s how afraid he was.

I want that to kind of sink in for a moment, right? A lot of us have never had to be in that situation where you think that death is imminent, where you really are going to have to activate that fight or flight response and Westerman, he had both. He was hiding, but he was, you know, had his sword ready to attack the attackers. They didn’t know what was happening and I’m not faulting him for this. And I’m not mocking him for it at all. I would probably do the same thing. And if it were me in that situation, probably be a good thing I was over a toilet because I don’t know that it would be able to control myself anymore. It was a terrifying situation for members of the House and Senate. And it’s also a kind of telling that this is how terrified the Republicans were. Yet, we’re not mocking them. Whereas when AOC said how scared she was, Republicans all came out and mocked her.

But this also shows how disgusting Kevin McCarthy is. Because what is Kevin McCarthy doing right now, folks? He’s going out there and he’s trying to whitewash his conversations with Donald Trump that took place on that day. And he’s now saying, oh no, Donald Trump did everything right. He acted accordingly. He acted swiftly. Even though we know, we can see the timeline, we know that none of this is true. But McCarthy’s own members were so scared for their lives, that they were hiding with weapons, hoping they weren’t even going to have to use them. That was the reality they were living with inside the House of Representatives during that Capitol riot. And McCarthy’s out there right now, trying to downplay everything that happened. Other Republicans downplaying it. Donald Trump himself is on record saying, oh, they weren’t storming the Capitol. They were breaking in there to hug and kiss the police officers.

That is what he said. But that’s not the reality. Stories like this are important. Westernman’s account of what took place and how terrified he was, are truly important. And I want to hear more of these, not for my own personal benefit, but so that the rest of the public can remember how we felt watching it on TV. And so they can understand how the individuals inside that building felt because that’s a feeling that doesn’t need to go away. We need to remember that and we need to carry the memory of it into the next few election cycles, I think. And any Republican that attempts to downplay it, they need to go reread Westernman’s account because I promise you they were feeling the same thing. They’re just not man enough to admit it.