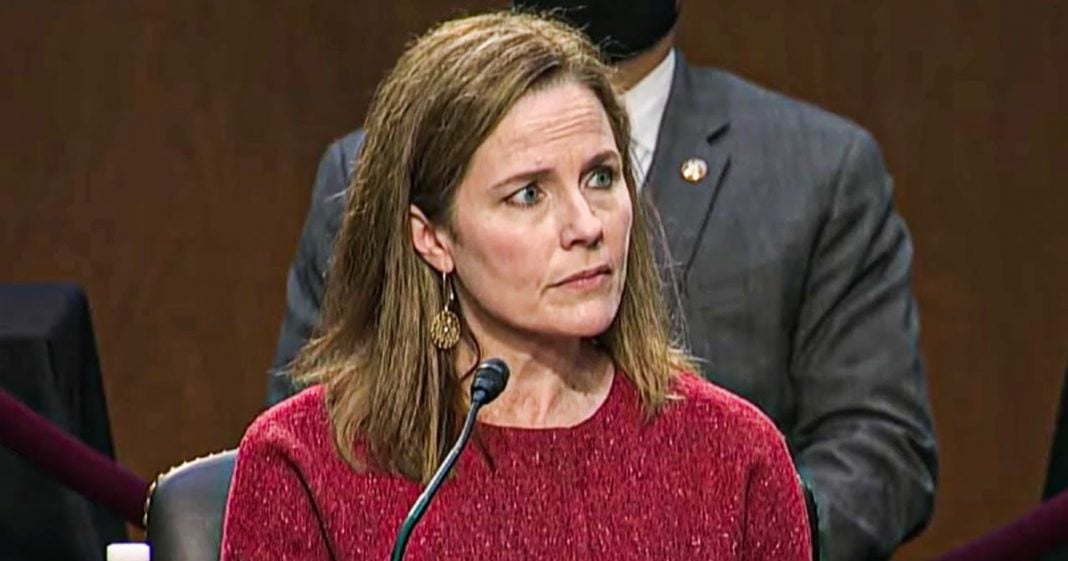 Justice Amy Coney Barrett has decided that she doesn’t need to recuse herself from a case involving the Koch-funded group Americans For Prosperity, even though the group spent big money to run pro-Coney Barrett ads during her confirmation. This is a blatant conflict of interest, and she is proving that she is just as corrupt and immoral as everyone thought that she would be. Ring of Fire’s Farron Cousins discusses this.

Supreme court justice Amy Coney Barrett has refused to recuse herself from a case involving a group funded, of course by the Koch brothers, Americans for Prosperity, that actually ran ads to support her during her confirmation hearing. Now, the case was regarding an issue out in California. It was Americans for Prosperity Foundation v. Rodriguez. And what happened there was that the state of California said that certain nonprofit entities do have to disclose their donors. Obviously these dark money Republican groups don’t want to disclose this, their donors. So they filed a lawsuit against this saying it violates their first amendment freedoms and Americans for Prosperity right there, along with the Koch brothers themselves listed as petitioners, got to go on Monday and argue that case in front of the US Supreme Court that included justice, Amy Coney Barrett.

And again, this same group, same individuals are the ones who helped spread propaganda to get her elected to the Supreme Court in the first place. So what this means is that yes, Amy Coney Barrett is just as corrupt as we had all feared she would be. Democratic Senator Sheldon Whitehouse, and he’s actually gathered a group of other Democratic senators, are calling for not necessarily an investigation, but they’re calling for answers. They want Amy Coney Barrett to come out publicly and explain to everyone why she felt she didn’t need to recuse herself from this case, even though this group essentially helped her win her Supreme Court seat. And I think those are answers that the public deserves. And if we do not get those answers, which I imagine we’re not, and if we do get them, they’re not going to be truthful. What this shows is that the Supreme Court’s a joke, folks. The United States Supreme Court is an absolute farce at this point.

They have ethical obligations to recuse themselves. They refuse to do it. Coney Barrett’s not the first one, by the way. There have been plenty other instances over, God, the entirety of the Supreme Court of these justices showing so little integrity that they refuse to recuse themselves of cases where they may have some kind of involvement with the plaintiff or the defendant. You know, if this was a lower court judge they’d be removed like that. There would be investigations. You would have all sorts of public outcry about this. But because we really can’t touch the Supreme Court and because it’s not necessarily mandatory that they recused themselves, our hands are tied. The only possible solution to this and, by the way, I think we all know how this particular case is going to go. The California law, because the Supreme Court’s captured by Republicans, is most likely going to get struck down. And once again, dark money is going to keep flowing into our elections.

And we won’t know where it comes from because apparently that’s free speech in the eyes of this idiotic court. So the only solution at the moment is to expand the Supreme Court. It’s a joke anyway. So what does it matter? You know, I’m tired of people thinking like, oh, but oh, it’s such a sacred institution. Sure. I’m sure at one point in our history, it was, it’s not anymore. You got Amy Coney Barrett who, by the way, also just got a $2 million book deal. So that’s pretty bad optics for the Supreme Court. She’s now refusing to recuse herself. You’ve got Brett Kavanaugh who openly wept during his hearing, screaming I like beer. Yeah. You look at these idiots and you telling me that the Supreme Court is a sacred institution these days. It’s a joke. So we may as well go ahead and treat it like one and pack it with as many justices as possible because apparently nothing matters anymore.