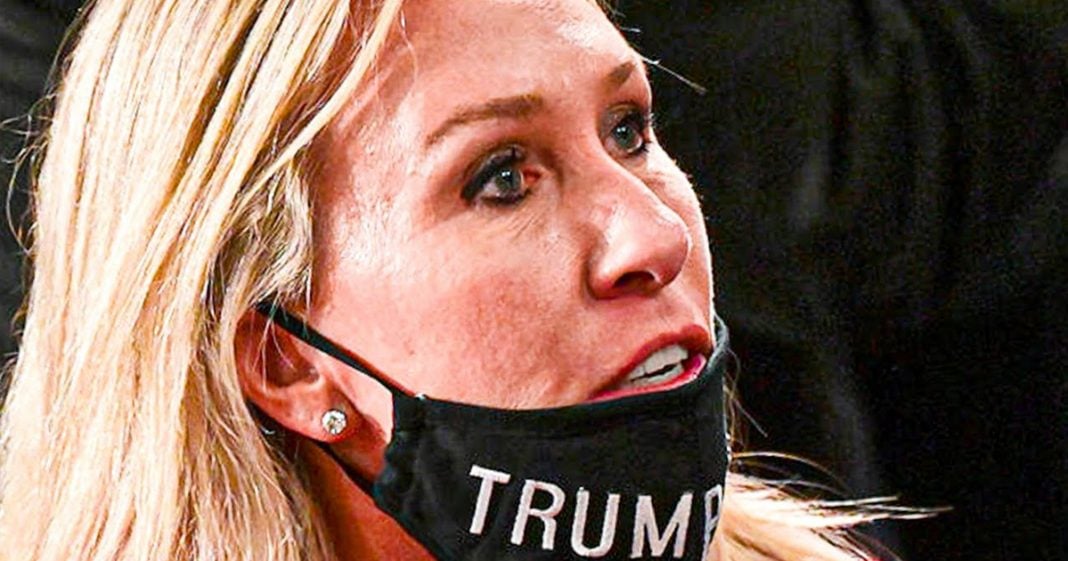 At a recent Republican meeting to talk midterm strategy, plenty of attendees expressed concern about people like Marjorie Taylor Greene and how her antics (and the actions of plenty others) could easily cost them the 2022 midterms. Traditional Republicans want the campaign focus to be on policy differences, but with nutcases like Taylor Greene, Matt Gaetz, and Lauren Boebert hogging all the press, it is difficult for them to rally around a coherent message. Ring of Fire’s Farron Cousins explains what’s happening.

Recently Republicans held a strategy meeting here in the state of Florida, where they talked about how they’re going to approach the 2022 midterms. Now I know a lot of us still kind of coming off the hangover of the 2020 presidential election. Hell, there are still Republicans out there fighting the results of the 2020 election. But we’re already also looking to 2022 and yes, those elections are technically already underway. People are raising money. They’re out there campaigning. People are starting their primary challenges. The ball’s rolling. And yeah, we gotta, we gotta suck it up and start dealing with that. But these Republicans down here in Florida talked about the major problems that their party has. Now, typically just, you know, based on history alone, this upcoming midterm election should be a red wave because that is typically what happens. The party out of power after losing a presidential election, typically does make gains in the following midterm election.

It doesn’t happen every time, but it happens enough to where that is what is expected, especially with the Democrats holding only a slim six member majority in the house. It’d be very easy for Republicans to flip it. Except the Republicans in Florida said, it’s not going to be easy to flip it. In fact, we could end up losing quite a bit of seats because the crazies have taken over. And the specific crazy that they’re worried about is Marjorie Taylor Greene. They are worried that Greene has officially become the face of the Republican party. And they think that is going to turn a lot of people off. They also specifically mentioned people like Lauren Boebert. People like Madison Cawthorne. People like Matt Gaetz and Jim Jordan. Yeah. There’s a lot of nutsos in the Republican party today who are eating up a lot of the media attention. And they’re doing it for stupid reasons because none of these individuals I listed, and they talked about this in the meeting, are out there talking policy. Okay. They’re not out there saying, hey, we can’t do this because of this reason.

And here’s a better alternative. I’m offering this for our constituents. No, no, no, no, no. They’re not doing that. They’re going out there. And they’re making headlines for stupid things they say and do. And that’s a problem with the Republican insiders. They know that this turns off voters faster than anything else. These Republicans who attended this meeting want the 2022 midterms to be about policy differences. And to be honest, you know, to their credit, that is what politics should be. It should only be about policies. Where do we differ from them? Where can we make your lives better where they cannot? How are they making your life worse, worse? We can fix that. But that’s not what the 2022 midterms is going to be because you have these weirdos to put it nicely, holding the party back. Not just holding them back from progress and talking about policy, but literally holding them in the past by still going out there and trying to say that somehow the 2020 election was rigged and Trump should still be president. The public knows this isn’t true.

I know a lot of Republicans think it’s true, but it’s not. The moderates, the Independents, the people that Republicans have to court in order to win back the majority, they’re not buying into this nonsense. So Republicans are scared that Marjorie Taylor Greene has become the face of the Republican party and that it could cost them the midterms. So my advice is to the Democratic party, make her the face. Just like Republicans down here in the South make every political ad about Nancy Pelosi. I mean, literally down here in the deep red South where I am, the political ads all talk about somebody being in the pocket of Pelosi or Schumer or back then Obama or Biden. Make your ads about Marjorie Taylor Greene. You don’t have to keep that limited to her little district. You could run ads saying Marjorie Taylor Greene’s the face of the party over in California. You could run them in New York. You could run them all over the country and paint her craziness as a disease that has infected the entire Republican party because it has. And that’s what Democrats need to run on. Take a page out of the Republican playbook and see how it works out for ya.