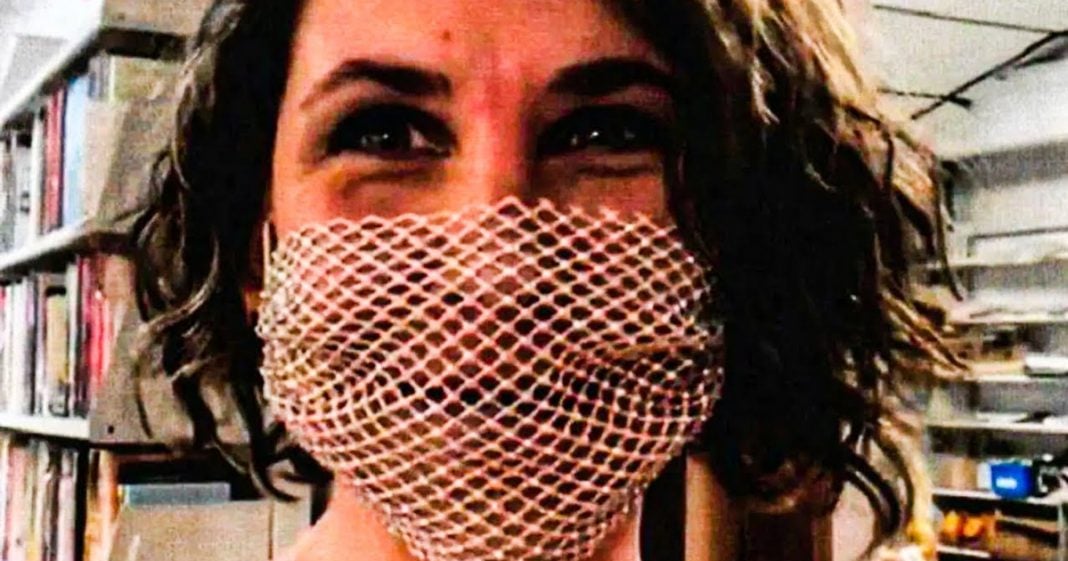 A Trump supporter that was indicted for her involvement in the Capitol riot was forced to issue a letter of apology to a judge after she violated one of the conditions the court put forward upon her release while she awaits trial. The requirement was that she had to wear a mask when she left her house, and the rioter was shown to have gone out in public wearing a useless mesh mask. When they show you who they are, believe them, and this person clearly doesn’t care about rules or safety or anything other than her own selfish interests. Ring of Fire’s Farron Cousins discusses this.

A Trump supporter that was arrested as part of the January 6th MAGA riot at the Capitol, is once again, in trouble with the court for defying the mask order that the judge had put on the individual, a woman by the name of Rachel Powell. Here’s what happened. Rachel Powell, as part of her pre-trial release was ordered by the judge to wear a face mask any time she left her house. The judge did this because judge wanted to make sure, hey, if you’re leaving your home, we want to make sure you’re not endangering anybody. That’s what they said in the official ruling. And again, this was a condition of her pre-trial release. So she wears a mask, except she didn’t wear a real mask. She wore a hole filled mesh mask that she says was inspired by singer Lana Del Rey because Lana Del Rey recently wore a mesh mask, which does nothing to protect people from the germs coming out of your mouth when she did a book signing.

So Ms. Powell says, hey, if it’s good enough for Lana Del Rey, clearly it’s good enough for me and good enough for the court. And when the court found out, they were furious. So Ms. Powell’s lawyers had to go and grovel before the judge saying, quote, well, clearly unwise the creation and use of the mask at issue was not designed to mock the court or it’s release condition. Powell wishes to apologize to this honorable court and a pre-trial services for her poor choice and her unwise conduct. Aw, it was just, just a total mix up. No, what this is is yet another case of when they show you who they are, believe them. She already broke the law once, allegedly, which we have to say, because she has not officially been, you know, convicted of it by storming the Capitol. Then you say, here’s a rule you have to follow if you don’t want to sit in jail until your trial, and then she doesn’t follow it.

So the only question that remains for me is why is Ms. Powell not in jail? I mean, hell even the judge issued this statement after this said, no reasonable person could think the defendants mask complied with that condition imposed to ensure the defendant would not pose a risk to the health and safety of the community when she left her house. So the judge admits like you are an idiot for thinking this. Like, this is clearly not what we meant. So why is Ms. Powell not sitting in jail right now? That’s the question I have. We have had other people in this country with much less serious charges against them, by the way, people who didn’t commit insurrection, that for the most tiny of infraction, as part of their pre-trial release are sent back to prison.

Yet here Ms. Powell still out about gets to issue this, oh, I’m so sorry. I was an idiot. And she’s still free. The only solace we can take in this is the fact that once this goes to trial, which is going to be a jury trial, this issue is going to come up and the prosecution’s going to be able to say, listen, she couldn’t even comply with the pre-trial conditions put on her because she has so little respect for the rule of law here in the United States. So even though she should be punished now, but won’t be, this will certainly weigh heavily on the jury’s minds when the actual trial convenes.