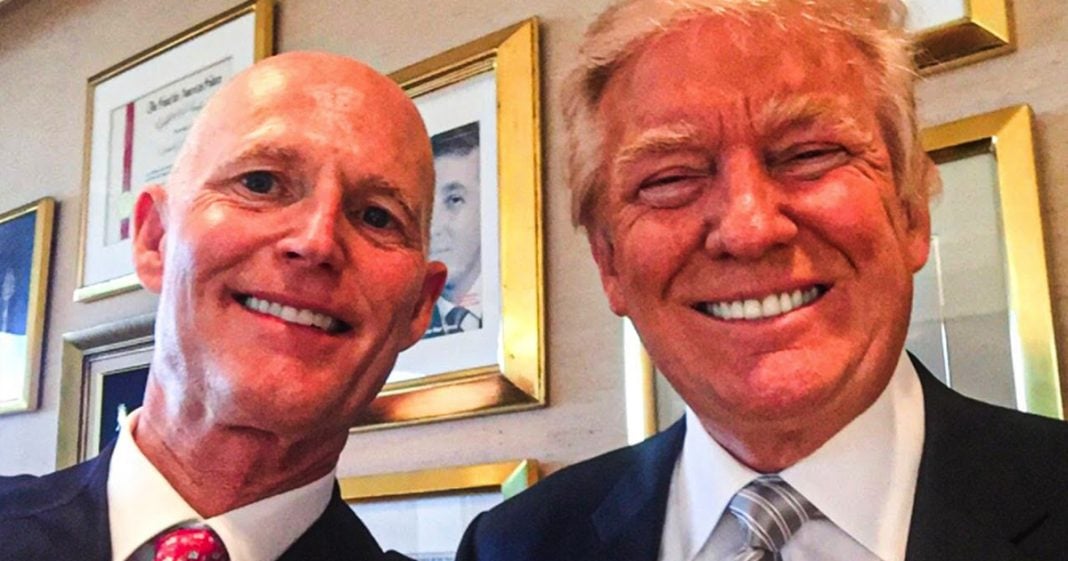 During an interview this weekend, Republican Senator Rick Scott defended his decision to give Donald Trump what amounted to a “participation trophy” at a recent Republican donor retreat. Scott said that Trump was given the award because he “worked hard” and because he held so many foreign leaders “accountable,” but he was unable to explain what either of those things actually meant. Ring of Fire’s Farron Cousins discusses this.

This past weekend, Senator Rick Scott from the state of Florida, also the chair of the national Republican senatorial committee, appeared on ABC news’ this week with George Stephanopoulos, where Stephanopoulos asked him point blank, you just gave Donald Trump the champion of freedom award down at that Republican donor retreat in South Florida. Um, mind telling us why? And as we all know, this champion of freedom award did not exist prior to it being given to Donald Trump. It’s literally something that Rick Scott and the NRSC created to make Donald Trump feel better. They essentially gave him a participation trophy for being president of the United States. Now when asked why he did it, Rick Scott had this to say, I gave him the award for the right reasons. He worked on border security. He worked on holding Xi Jinping and China accountable. The Castro regime, accountable. Maduro, accountable. Helping Israel. Got the Abraham Accords done. He worked hard. Every president I know would like to get more things accomplished, but he did some things that prior presidents have not gotten done.

He, he worked hard and he held people accountable. Now, Rick Scott, unfortunately did not elaborate any more than that. Okay. We don’t know what it means when he says he holds, he held Xi Jinping accountable. He held Maduro accountable. What does that mean? Like, what did they actually do? I know at least in the case of Xi Jinping, he, he did nothing. He did nothing. He started an idiotic trade war that hurt us a hell of a lot more than it hurt them. A trade war that, by the way, is still going on. Okay. I’m still waiting on answers as to why that idiotic trade war is still happening today. What is, what are Biden’s plans to do something about this? And yet every time we talk about that, people kind of hit the snooze button. Like, ah, I don’t care. I don’t want to. No, it’s a very important issue here and nobody seems to care anymore. So no, I wouldn’t call that accountability. Oh, he, he got this, the Jerusalem Accords things done. What did that accomplish though? Really? I mean, are there any tangible benefits to this? I, I, I’m, I’m struggling to, to see that here. Donald Trump golfed just as much as he worked, Rick.

And you’re sitting there on national news Sunday morning, when everybody’s watching, telling us that you gave Donald Trump his participation trophy, just because he worked hard. In his defense, Rick Scott looked like an absolute idiot. He looked like a pandering buffoon, which is exactly what he is. Everybody knows that Donald Trump did not work hard as president of the United States. We saw his daily schedule where he had all these times blocked out for so-called executive time, which is essentially when he would just go to the residency in the White House, watch Fox news and tweet about it. That’s what you gave him an award for. That’s what you did. Now, Stephanopoulos went one step forward and said you gave him this award for spreading these election lies, which is also true because in his last few months in office and of course ever since then, that’s all Trump has done. Spread these election lies. But because these Republicans are so beholden to this political loser, they put their own reputations on the line. They can’t even defend their decisions to give him this participatory, participation trophy. They all look absolutely pathetic because that is exactly what they are. Pathetic, weak individuals, bowing down to a political loser.