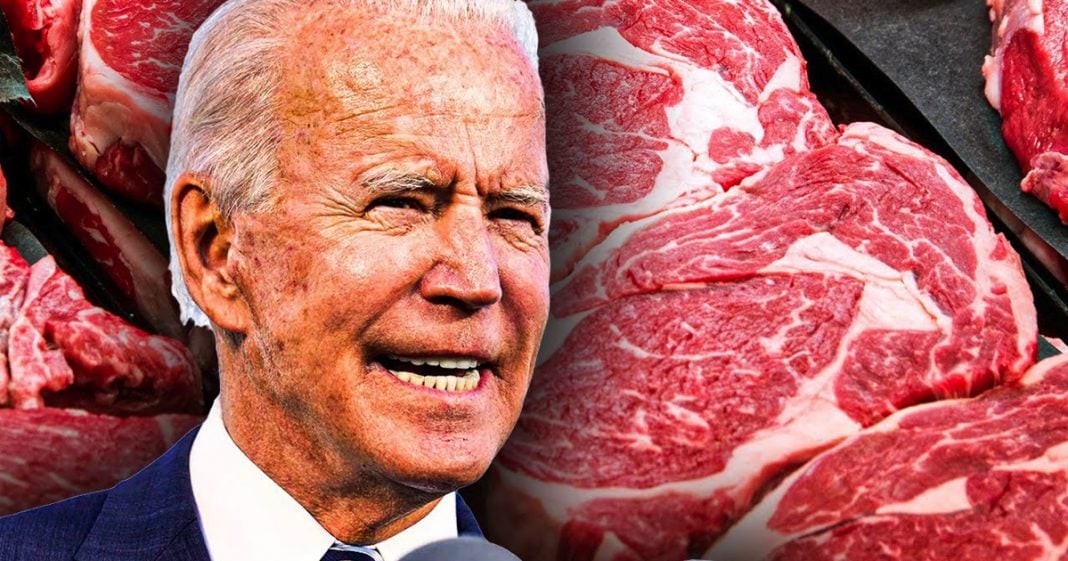 The conservative media is once again having a freakout over something that isn’t even real. For the past few days, outlets have been pushing the claim that Biden’s environmental plan would limit consumption of red meat to four pounds per year. Idiotic Republican lawmakers have echoed this claim, some going as far as to post pictures of themselves buying meat in an attempt to “own the libs.” Ring of Fire’s Farron Cousins discusses this.

If you spent any time either on social media or watching conservative news outlets over the past few days, you have undoubtedly heard the fact, the undeniable incontrovertible fact, that Joe Biden is about to limit your red meat consumption to four pounds per year. Which means you get one burger per month. So, where did all of this come from, right? Let’s get one thing out of the way, right, this is obviously not a fact. This is an idiotic right-wing talking point that has been kicking around since long before the green new deal ever was a thing, right. Conservatives have always said, anytime we talk about the need to reform factory farming, reduce personal emissions by perhaps, perhaps consuming less meat. Republicans always jump to the extreme and say, they’re banning red meat. Yeah, nobody’s banning red meat. This idiotic talking point actually came from a report from the daily mail, a UK tabloid, not known exactly for telling the truth.

And it was based off a misinterpretation of a set of research from the University of Michigan. Now the University of Michigan study actually said, hey, if individuals want to reduce their personal emissions, one thing they can do is consume less meat. Like that, that’s basically what it said. Because we do use up a lot of farm land for livestock. So yeah, reducing that, reducing the amount of fresh water we give them can help combat environmental issues. That’s all the study said. And somehow the daily mail conflated that study with Biden’s environmental proposals and confused it to the point where right-wing media and pundits here in the United States picked up on it and came up with the idiotic talking point that you’re now going to be reduced to four pounds of red meat per year. You had conservatives on social media posting pictures of themselves purchasing large chunks of red meat.

Some of them showed big steak, plates with massive steaks on them. Just absolutely doing whatever they could to own the libs. But it turns out they’re just a bunch of idiots and I’m tired of not calling them that, folks, because that’s what we’re dealing with here. That is how little substance there is in these right-wing arguments against the green new deal, against combating climate change, that they have to resort to these absolutely ridiculous talking points that we’re somehow banning red meat. It’s not true. And it pains me to actually have to devote any time to debunking this because it is such a stupid talking point being pushed out there by equally stupid people. Nobody’s banning meat. Should we individually work on reducing our consumption of meat? Sure, sure. But the real bad guys in, in climate change, it’s not the individuals eating red meat.

It’s the fossil fuel industry. Hell it’s the Pentagon, the largest polluter on the planet. You know, we have just a handful of companies on the planet who are responsible for the majority of carbon and other greenhouse gas emissions on planet earth. Those are the real bad guys. And those are the bad guys, by the way, paying these stupid people to say stupid things to attack the green new deal and other environmental projects with idiotic talking points saying that they’re going to be banning meat. Nobody is banning meat. That is not a part of any proposal. That is not a part of any legislation. That is simply a talking point put forward by stupid people who have nothing of substance to say about climate change.