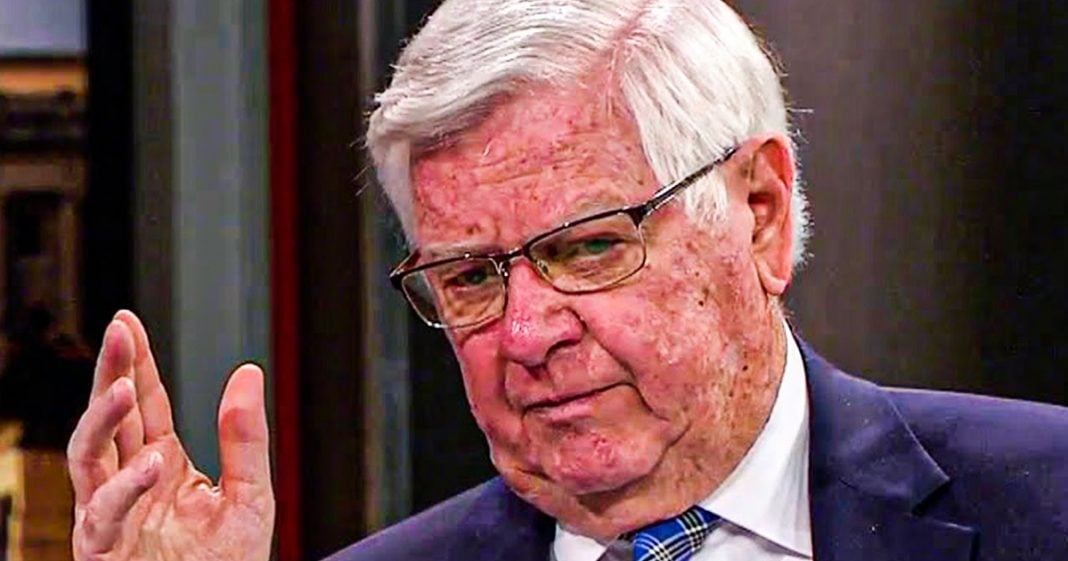 A third Republican has now been fined a total of $5,000 for refusing to walk through the metal detector that has been set up in the House of Representatives. This time it was Republican Hal Rogers who claimed that he had to skip the security measures because he needed to go vote. He then went out to go back through, but it was too late. Ring of Fire’s Farron Cousins explains the absurdity of these Republicans and why they deserve even more than a fine.

Yet another Republican has been fined $5,000 by the house of representatives for failing to go through the metal detector in the house chamber. This time it was representative Hal Rogers from the great state of Kentucky, Republican, of course, who went through the metal detector, but he set it off. So then the guard said, okay, I’ve got to wand you down to make sure you don’t have anything. And he said, no, I got to go vote. And he just walked right through. So the house says, listen, we’ve got rules in place. If you don’t do what you’re supposed to do, five grand, boom. First offense. Second offense and any repeating offense is 10,000 a piece. Of course, to his credit, I guess, Hal Rogers did eventually come back after he did his vote. And he said, okay, I’m ready, wand me down. And the security guard was like, there’s, there’s no point to it now.

Like, I don’t know what you did in there. If you had something, you know, some kind of contraband on you, you likely could have stashed it somewhere like in your deck. I don’t know. But there’s no sense in wanding you because you’ve already been in there. You idiot. And I guess Rogers was just like, okay, well, I tried. First of all, if you’re running late for a vote, so late that you can’t take five seconds to go like this and let them you, then you need to manage your time a little bit better. That’s on you Rogers. Second of all, there’s a reason these new security measures are in place. The insurrection, remember that Republicans cheered on. Yeah. That’s why this is there. Not to mention the fact that we have already had one Republican try to sneak in a concealed gun. Representative Andy Harris from Maryland back in January was caught with a concealed gun that is not even allowed on the house floor. So yes, there is a reason to do this.

And Rogers of course, like the other Republicans who got busted, the other Republicans, of course being Louie Gohmert and Andrew Clyde. He has appealed his fine because they have to pay the fine out of their salary. It comes out of their check. They cannot use campaign funds or PAC money. Nope. It has to be their money. And I’m assuming much like Gohmert and Clyde, the appeal’s going to go nowhere. And they’re going to say, yeah, you still owe us the money. It’s pretty cut and dry. We have these security measures in place for a reason. It literally takes a couple seconds. You know, it’s not like you have to sit there, like you’re going through airport security. We’re not making you take off your shoes and empty your backpacks and do all that nonsense. No, we’re just saying walk through the metal detector. It’s basically like getting into a theme park.

You go through the metal detector really quick. You empty your pockets. Okay. You’re clean. You put everything back in. You walk through 60 seconds tops. But that is apparently too much for them. And you know what? I think the fine isn’t enough. What I would like to see is what happens in other places where if you don’t go through the metal detector, they just come and straight up, like tackle you or they come and they snatch you back. That’s what I want to see. Right? Because that’s what these members deserve. They know why these metal detectors are there. They understand the dangers. They know it doesn’t take any of their precious time and it doesn’t violate any of their precious rights. They’re just choosing to skip it because there are a bunch of jackasses.