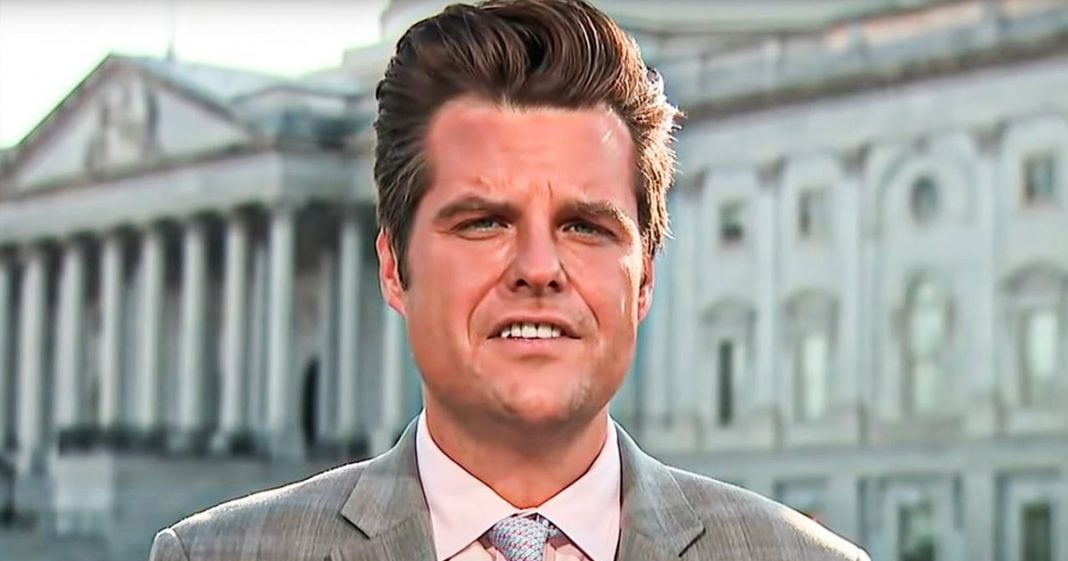 Republican lawmakers in Florida are apparently terrified that they are going to get sucked into the ongoing investigation into Matt Gaetz and Joel Greenberg, and that is a very telling statement. According to one Florida lawmaker, Republicans in the Capitol are starting to panic that they could go down, much in the same way that Governor Ron DeSantis is now getting roped into the investigation. Ring of Fire’s Farron Cousins explains what is putting these Republicans on edge.

Last week, during a conversation with the host of Progressives Everywhere Jordan Zakarin, or Zakarin, excuse me, a Florida state representative by the name of Carlos Smith told him that Republicans in the state house here in Florida are starting to panic because they’re worried that they’re going to get roped into the whole Matt Gaetz, Joel Greenberg investigation as well. Here is what Representative Carlos Smith had to say. The web of corruption that Matt Gaetz, Joel Greenberg and Ron DeSantis are all wrapped up in, is really a web that appears to tie up the entire Republican party of Florida. It seems like everyone in the Capitol is nervous about what the next revelation is going to be. And who else is implicated in this sweeping saga of corruption that they’ve been a part of for so long. This is what happens when any particular party is allowed to stay in power for as long as Florida Republicans have. It’s not only about corruption, but they just get sloppy. They get lazy, they get messy and arrogant. And I think that’s how Matt Gaetz got in trouble. He got arrogant.

And man, if that isn’t the exact same thing I’ve been saying since the very beginning of this. Matt Gaetz, as I’ve repeatedly said, is suffering from a very severe case of affluenza. This is a guy who’s gone through his whole life without ever having to feel ramifications for his actions. Daddy always got him out of trouble. And of course, when there’s no consequences for bad behavior, the bad behavior tends to escalate. We have the reports from Matt Gaetz’s former classmates that say, yeah, he’s like the only guy from our school that didn’t actually grow up. He’s still the same person he was back then, back in high school. And now this. A member of the Florida state legislature, a Democrat by the way, saying he sees it. He sees how nervous they are behind the scenes. He knows that they’re worried. Now let me ask you this. Are you worried? You Ring a Fire viewer right now. Are you worried you’re going to get roped up into the scandal?

I’m not. I’m actually not worried at the moment that I’m going to be roped into any legal scandal whatsoever anywhere at anytime ever, because I know I’ve done nothing wrong. So why would these Republicans be nervous? Huh? Can anybody answer that question without saying, well, they clearly did something wrong. You can’t, you can’t because that is the logical conclusion to this whole thing. If you’re worried that you did something that’s going to get you roped up into the Matt Gaetz, Joel Greenberg, Ron DeSantis, as he points out investigation, um, then you’re probably going to get roped into the investigation. But he has another great point too. It’s just Matt Gaetz that’s suffering from this overwhelming arrogance. It is the entire Republican party in Florida. They have had complete control of this state for so long that Alabama has had a Democratic governor more recently than we have in Florida.

As I keep saying, and the 2020 election proved it by shattering expectations, this is a red state. Republicans have total and complete control. And absolute power as Republicans have had here in the state of Florida corrupts absolutely. And that’s why they’re panicked now. Chickens are coming home to roost. People are talking to the feds. Everybody is spilling the beans. So I got news Republicans in the state house. If you’re worried about going down in this investigation, I suggest you reach out to the FBI and the DOJ first and say, hey, listen, I have things I need to tell you, tell you about myself. But there’s also a couple other people I need to tell you about. Let’s make a deal.