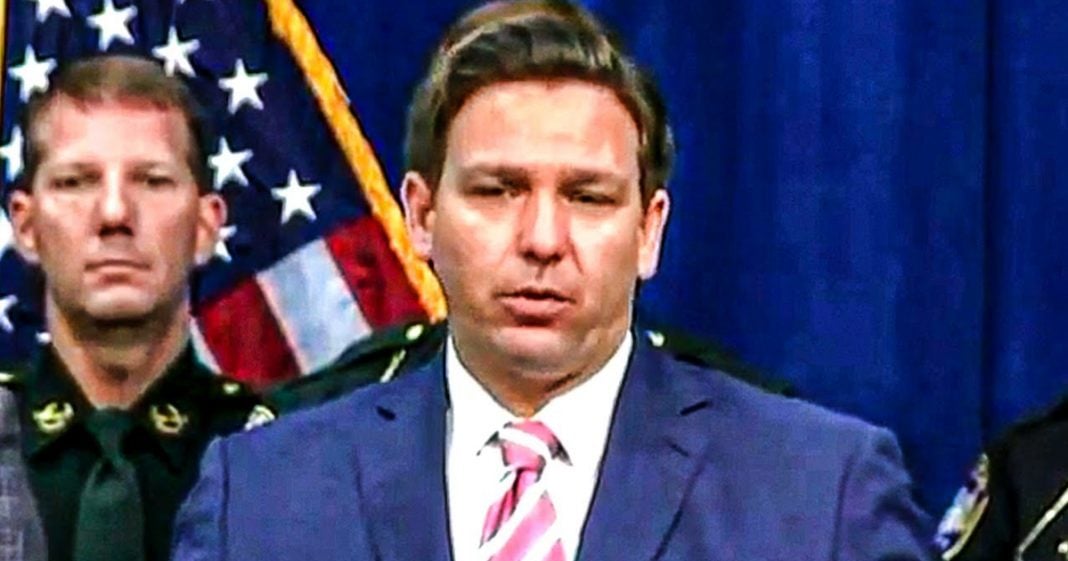 Republicans in the state of Florida passed, and governor Ron DeSantis signed, a sweeping tax increase on Florida consumers this week so that they could pass the savings along to businesses in the form of a tax cut. The people who need the most help in this state never receive it, and those that are more than capable of helping themselves always receive the handouts. Ring of Fire’s Farron Cousins explains what’s happening.

Florida’s Republican governor Ron DeSantis signed a piece of legislation this week that is going to raise taxes on Florida consumers in order to cut taxes for Florida businesses. Now, the reason this wasn’t bigger news was because this happened on the same day, Monday of this past week, that he signed a piece of legislation that essentially shreds the first amendment rights of Florida citizens. And of course, because they didn’t announce that he had signed this tax hike for Florida consumers until 11:23 PM at night. Everybody had gone to bed. Everybody was focusing on the Chauvin trial that was going to wrap up the next day. And so they said, okay, quietly, right before midnight between you and me, we just raised taxes on consumers to cut taxes on business. Good night. I’m not kidding. They made that decision announcement at 11:23 PM on Monday in an email that contained nothing. Just the announcement he has signed the, he has signed the bill.

This bill was supported by Republicans who control Florida’s state legislature. The Democrats were opposed to it. And basically what it does is it imposes a sales tax for online purchases of Florida residents when purchasing something from out of state. Now, if you were to purchase something online from Florida and you live in Florida, you already had to pay sales tax on it. But now if you buy something from a different state online, you have to pay Florida sales tax on that as well. You know what, I’m actually not that opposed to it if this tax was actually going to do something to make the lives of Florida citizens better. Like if we were going to use this extra sales tax, because this is going to be, you know, millions and millions and millions of dollars a year, if we were going to use it to, I don’t know, maybe tackle climate change here in the state of Florida.

If we’re going to use it to maybe start rebuilding our own infrastructure, maybe put some high speed rail throughout the state, you know, draw people to the tourist attractions. Cool. I could get behind that. And I wouldn’t be upset having to pay this tax. But instead they’re using it so they can reduce business tax rates from five and a half percent to 2%, I believe is the number. Yeah, five and a half percent to 2%. And initially this money is going to be used to help replenish the state’s unemployment fund. So that’s good. And then once that happens, which will probably be about by the end of the year, the savings then get passed on to businesses who get to pay less in taxes. And I guarantee you because of all the other idiot, idiotic things that DeSantis did this week alone, this one’s not going to get picked up. This one’s not going to be mentioned by the news.

It’s not going to be mentioned in local news broadcast across the state of Florida, that Republicans just raised your taxes. Nope. Not going to happen. People are going to see their taxes go up and you know what they’re going to think here in the state of Florida, that Biden. Biden raised my taxes. And Ron DeSantis and the Republicans in our state legislature know that. They know that they can pass this tax hike and tax cut for businesses and Biden’s gonna get the blame for it because they have got this media in their pockets. Not all of it. There’s still a few Florida outlets willing to tell the truth, but not enough. And certainly not with as much reach as the media here in Florida. This is a disgusting story. Florida residents are going to get screwed over by this. And most of them will never know who is responsible for it.