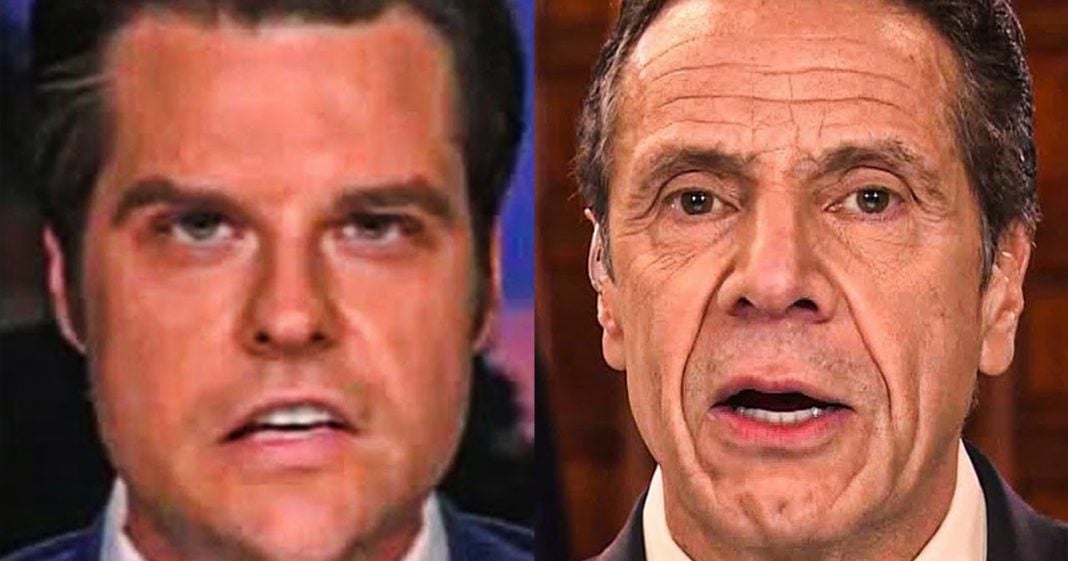 Via America’s Lawyer: Matt Gaetz and Andrew Cuomo have both had a scandalous 2021, and now they’re both part of a new club: the Never Resign club. Mike Papantonio & Farron Cousins discuss more.

Mike Papantonio:             Matt Gaetz and Andrew Cuomo are now part of a new disgusting club. The never resign club. Wow. You know, you called this right. You, you really did. You made, you made a comparison and you said, Cuomo is taking this position, I’m not gonna resign. Gaetz has taken the position, I’m not going to resign. They think it works. Obviously it’s working for Cuomo. Cuomo last week, two weeks ago comes out, he, he legalizes marijuana and maybe everybody will forget all the awful things I’m being accused of. Okay. So what’s Gaetz’s play here?

Farron Cousins:                  I think Gaetz hopes he can just simply weather the storm because look, Matt Gaetz is in a deep red district. This district has not voted for a Democrat since JFK in 1960. They’re not about to turn around and turn on him. I mean, the deep South, Gaetz knows that if he can not go to prison, he can continue to win elections. And eventually the public will in fact forget. And it really is the same thing with Cuomo. Now that the Matt Gaetz story has broken, nobody’s even talking about Cuomo anymore. And that’s kind of what you bank on as well. You hope, well, the next guy is going to do something so gross that I’m going to look tame in comparison. All they have to do is weather it until the next person gets in trouble and it moves down the line.

Mike Papantonio:             It’s like when Bill Clinton not only caught on the Lewinsky, he was caught lying. I mean, he was, committed perjury for God’s sakes. No, I’m going to wait it out because, because this is what he said, the American public needs me.

Mike Papantonio:            The American public needs me. Al Franken had the decency to say, you know what? I look kinda like a scumbag. Some of the stuff I’ve done, I’m going to resign. But the whole and, and of course the Democrats are saying, oh my God, I wish he wouldn’t have resigned. He resigned too early. But other, other politicians have done this. They’ve done the wait out game, haven’t they?

Farron Cousins:                  I mean, we had a new scandal every week, two impeachments, and he just always said, no, I’m not going anywhere. I’m staying here. And the public said, well, okay then I guess, I guess it is what it is. And so everybody is now operating off that playbook.

Mike Papantonio:             How about Robert Menendez, New Jersey, right? Senator Menendez. He’s caught for bribery. He’s caught for corruption, indicted. Now it didn’t hold, but there was all of this information around him. The Democrats say to Menendez, just stick it out. He’s still there.

Farron Cousins:                  He did, I mean, you’ve got, look, Lori Lightfoot up in Chicago. The mayor covered up the video of the kid being killed. Like, there’s, there’s political scandals that 10 years ago, these people would have been out of the, out of the office by noon.

Farron Cousins:                  And we would have moved onto the next person. But everybody thinks now, well, I’ve got the entire party behind me because everything’s so tribal. They’re not going to turn on one of their own. And they don’t, it’s sick.

Mike Papantonio:             Democrat, Democrat, look, we do the show, every time we do the show, when we criticize a Democrat, people go freaking crazy. Like we’re some kind of right wing nuts. They’re the nuts because they don’t have the ability to analyze both sides and be honest about their candidate or their party. And that is what’s going to allow Matt Gaetz to stay in office unless he’s indicted.