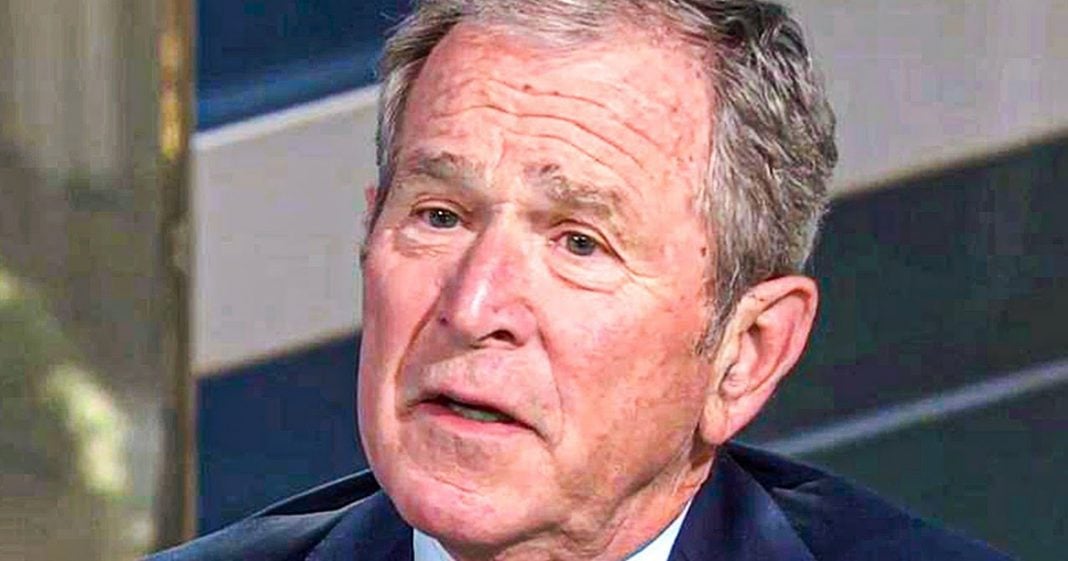 George W. Bush, the former President that lied us into a war of aggression in the Middle East, suddenly thinks that the modern Republican tells too many “untruths.” Bush has reemerged in recent years as an alleged “conscientious” conservative, one that doesn’t like the direction the Party took under Trump. But his words ring hollow for most, considering he’s the one who helped steer Republicans down the path that they are currently on. Ring of Fire’s Farron Cousins explains what’s happening.

Former president George W. Bush is still out there on his, I guess you could call it his image rehabilitation tour, that’s been going very slowly over the past four years. But he actually appeared on the Today Show, earlier this week, where he lamented the fact that Republicans today are just too darn dishonest. George W. Bush thinks that today Republicans tell too many untruths and spread too much misinformation. Here’s his exact quote. He said, what’s really troubling is how much misinformation there is and the capacity of people to spread all kinds of untruth. I don’t know what we’re going to do about that. I know what I’m going to do about it. I’m not on Twitter, Facebook, any of that stuff. No, no. You’re just the guy that lied us into Iraq and Afghanistan, wars that are actually still going on today. 20 years later, bud. Your administration was the number one spreader of misinformation.

I mean, God, you put Trump to shame with what you did with your lies. At least Donald Trump’s lies were lies of vanity. Your lies got thousands and thousands and thousands of Americans killed and hundreds of thousands of citizens of the Middle East killed, unnecessarily because you lied because your administration lied and spread misinformation and untruths. You sent fricking Colin Powell to the UN with his little thing like, hey, they got yellow cake. They’ve got aluminum tubes. They’re making weapons of mass destruction. Oops. That wasn’t true. Hey, what about maybe Saddam Hussein had something to do with 9/11, right? Remember that? Oops. And that misinformation persisted so deeply that you had for quite a while, a majority of Republicans who thought Saddam Hussein was involved with the 9/11 attacks.

Not to mention, of course your enhanced interrogations, which was actually torture. You’re a scumbag, you’re a war criminal. And you do not deserve the privilege of being able to go on TV to try to rewrite your history and act like today’s Republicans are somehow worse than they were 20 years ago. That’s not what happened. I remember because I, you know, I worked in liberal media throughout the entirety of this admin, the Bush administration, most of the Bush administration, I should say. I remember the outrage. I remember the marches in the streets, millions of people, marching to protest the illegal and immoral wars based on lies that George W. Bush started. All of that outrage as a nation because his administration couldn’t stop lying about what was actually happening. And somehow he thinks that today it’s worse. No, don’t get me wrong. It’s horrible today. But the Republicans have been horrible about this for decades now.