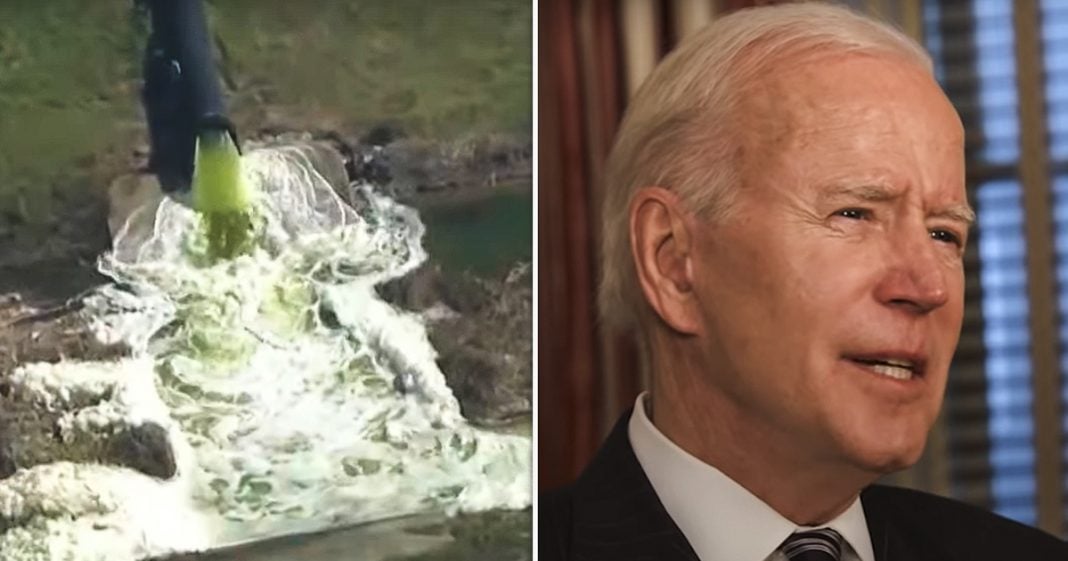 Mike Papantonio:             A wastewater containment facility in Florida is leaking millions of gallons of toxic sludge. It’s forcing the governor to declare a state of emergency. This is the most putrid story for so many reasons. A, it’s a real good look at the fact that our regulators in Florida, the DEP and the EPA allowed this to happen at all. But why? Because government all, regulators in Florida always side with the corporations. So they let this cat come down from New York. Okay. This guy comes down from New York and he purchases this land. This H, HRK Holdings. Here, this is some cat in New York. He owns a chain of Hooters.

He owns a chain of Frederick’s of Hollywood, William F Harley lll, William F Harley lll. They don’t make him bond anything. He comes down and says, I’m going to take control of this and keep it safe. Do they ask they ask him to put up a bond in case it goes bad? No. Do they ask him to do any kind of surety to make sure he’s doing this right? No. Why? Because our regulators suck and because of that, we’ve got thousands of people that are gonna be affected by this.

Farron Cousins:                  And, and they knew something like this was going to happen too. That’s the sick part of this. You know, for 20 years they’ve been storing this wastewater right there with the phosphogypsum, which is radioactive. So they’ve been storing it there for 20 years. They’ve had two previous leaks. I think one in ’05 maybe, one in ’11. So they knew, or maybe it was ’13, but anyway, they knew that this was shoddy work. They knew this was imminent. And then they sat on it for another 8 to 10 years waiting for the big catastrophe, which is what is awaiting Florida down there right now. They’re, they’re trying to patch it, trying to stop the leaks. And they can’t.

Mike Papantonio:             So the DEP is going on, oh, this isn’t radioactive. You don’t have to worry about any radioactive element. That is nonsense. We have people going down there as we speak to test this and what we’re going to find is we’re going to find that this is gypsum and phosphate. They’re, look, they’re pumping, they pumped 33, what was it, 33 million gallons a day.

Mike Papantonio:             33 million gallons of this into a pristine waterway, the Tampa Bay area waterway where all the fisheries, they need it to survive. It’s like they’re leaving town and throwing us a finger and saying, ah, we got away with that again.

Mike Papantonio:             The Biden administration has released an ambitious infrastructure plan, but Republicans are united in their opposition to this new plan. You know, really? Well, it’s McConnell again. McConnell’s out there saying, oh, this is a bad idea. It’s almost as if they don’t understand that bridges are crumbling. Roads have, just have to be rebuilt. We have a grid system that no longer works. Our schools are like 20 years behind in sophistication. We’re crumbling as a grid and McConnell says, oh, we can’t spend any money on that.

Farron Cousins:                  You and I were doing segments together, by the way, back during the Bush years about America’s crumbling infrastructure, this is how long the problem has been going on and been ignored. So Biden comes out. He says, okay, I’ve got a $2 trillion plan and we’re going to spend more as the years go on. But right now we’ve got to rebuild the roads, the schools. Put in some high speed rail, rebuild our energy grid to handle the renewable energy we want to invest in. To put it another way, I’ve got this great plan. We’re going to spend a lot of money and create a lot of jobs.

Farron Cousins:                  And then we had earlier this week, in addition to McConnell, Joe Manchin, he comes out and he says, I’ve got seven other Democrats with me who don’t like the idea of taxing corporations. So we may not support this either. So, so they, they want to protect the corporate profits and screw us out of thousands of jobs.

Mike Papantonio:             Yeah. So as, as, as we see everything crumble around us, these corporations that they don’t want to tax are hiding billions of dollars offshore, along with not, along with paying minimal, minimal taxes. And as we look at this, this is an opportunity for him to deliver on what he talks about and that is to bring green energy. This is part of the infrastructure, bring green, green energy to this country and put a lot of people to work. You can put a lot of people to work with this. But you know, McConnell the turtle man, I got to tell you some things never change. Farron, thank you for joining me. Okay.