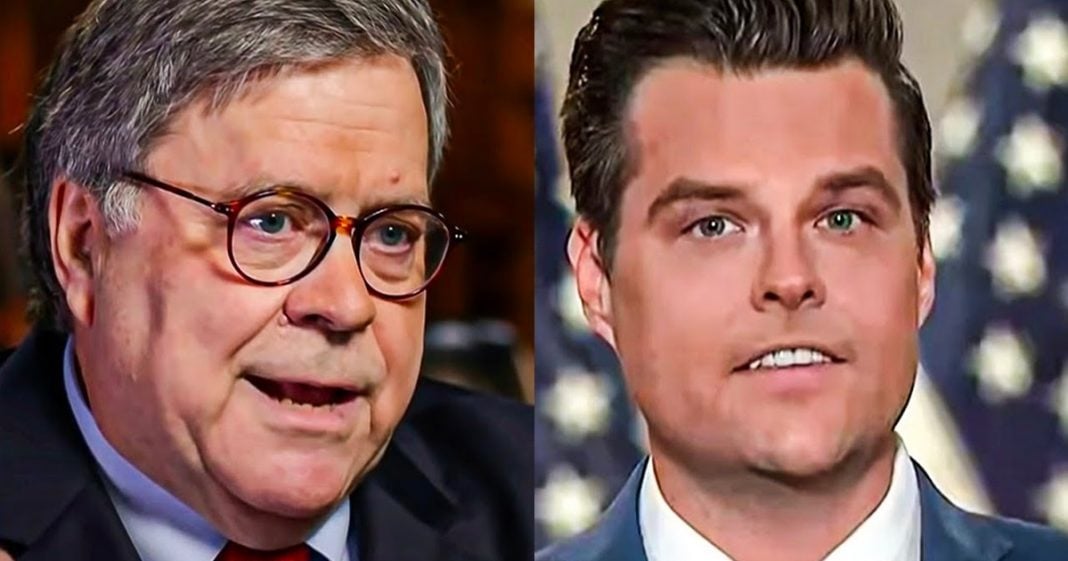 A new report says that then-Attorney General Bill Barr flew into a fit of rage after it was revealed to him that Representative Matt Gaetz had stepped in an interfered with a DOJ investigation. But it isn’t THAT investigation, it was an inflated voter fraud investigation that Trump wanted to happen in the state of Florida to pave the path for his bogus claims of voter fraud. Ring of Fire’s Farron Cousins explains what happened in this scenario.

Matt Gaetz apparently interfered with an investigation by the US department of justice last year. And believe it or not folks, it’s actually not the current investigation that has roped Matt Gaetz in. No, this was a completely separate event brought by US attorney, Larry Keefe and Larry Keefe is a US attorney of course, appointed by Donald Trump. And what Mr. Keefe wanted to do was he wanted to open up an investigation, a DOJ investigation here in the state of Florida to root out voter fraud following the election. Right? Because that’s all conservatives knew how to do to deal with their losses rather than accept the fact that people rejected them. So he goes to the DOJ and says, I’m going to open up this investigation. DOJ’s office of public integrity said, yeah. I mean, the scope of your investigation is a little too broad.

That’s a fun quote, right? Here’s the thing, Matt Gaetz acting in pure little frat boy, I always have to have my way fashion, went and told daddy Donald that the US attorney wasn’t getting his way because Bill Barr’s DOJ says they’re too broad in scope. Like that’s it. They didn’t even say, by the way, that you couldn’t conduct this investigation. They said, hey, you’re a little too broad in scope. I mean, that’s how, that’s the phrase, broad in scope. Maybe narrow it down a bit instead of going on a fishing expedition, which is what this was. They didn’t have any evidence. They wanted to get authority to go maybe try to whatever. Which isn’t, by the way, how it works. You, you typically come with evidence saying, hey, we have evidence here that suggests there could be fraud. Can we investigate? The DOJ is like, oh, hell yeah, go for that.

Um, but he didn’t do that. He said, look, I think there could have been bad things here in Florida. And that’s it. But he didn’t do that. He didn’t do it the right way. Keefe wanted to appease Donald Trump and when he didn’t get his way, he went to another guy who knows how to appease Donald Trump. And then Bill Barr got. This entire department of justice under Donald Trump was one giant cluster F to put it gently. But at least we also know now that Matt Gaetz isn’t a stranger to asking people with more authority to interfere with the department of justice. Wonder how that’s going to play out for him in the current investigations.