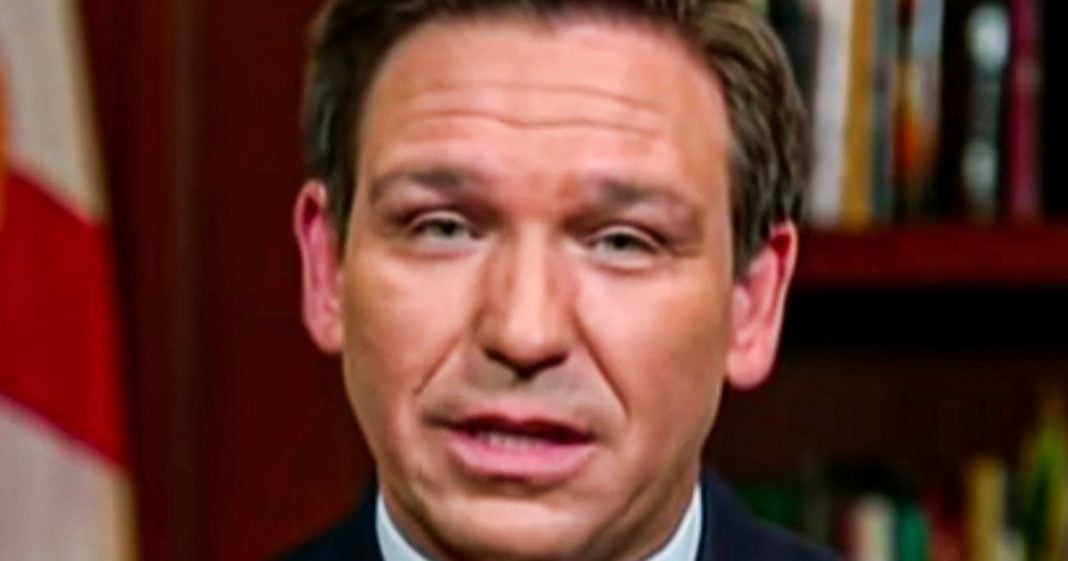 Florida’s Trump-loving Republican governor has signed a bill into law this week that will allow authorities to curtail First Amendment freedoms of Florida residents. The bill, HB1, will give law enforcement and local officials the final say in whether or not a protest or march turns “violent,” and at that point individuals can be arrested immediately, facing stiff jail sentences. Governor Ron DeSantis signed the order in spite of a lack of rationale, but he is itching for political points from conservatives, as Ring of Fire’s Farron Cousins explains.

On Monday, Florida’s Trump loving Republican governor Ron DeSantis signed one of the most sweeping attacks on first amendment freedoms for American citizens into law. And what this does is it basically cuts down on your right to protest here in the state of Florida. And again, that is a right granted to American citizens from every state by the first amendment of the US constitution. Ron DeSantis says, you know what, I’m gonna put some limits on that, limits that honestly likely not going to hold up in court. Although we’ve been surprised in the past, and this could be one of these things. This particular piece of legislation makes it totally legal, gives the driver immunity if you drive through a group of protesters on the street. So if you’re in a protest in the state of Florida, you have to be on a sidewalk because if you walk into the streets, suddenly it’s open season on you and motorists can run you down without a second thought and you legally cannot prosecute them for that under this new legislation, which signed on Monday takes effect immediately upon signing. That’s now law. Somebody protesting in the streets, you can run them over, kill them in the state of Florida and you legally cannot be prosecuted.

That’s, that’s, that’s what Republican government gets ya. Um, it also gives authorities, law enforcement authorities, more authority to declare a protest violent. And if the officer’s deem that the protest has become a violent one instead of a civil one, then they can start arresting every single person for a felony. If you assault a police officer, automatic felony with mandatory jail sentences to go along with it. And assaulting a police officer can be anything from shoving back when an officer’s shoving you, boom, you go to prison, you’re done. That’s what this law does. It does a host of other things as well, that all curtail our first amendment freedoms here in the state of Florida. And Rod DeSantis repeatedly during his signing in Polk County on Monday said, he’s doing this so Florida doesn’t become Portland. We don’t want Florida to become Portland. We’re not going to be Portland, Portland, Portland, Portland, Portland.

And here’s the thing. The dumb asses that live down here in Florida actually did fear that. I mean, y’all may think that that’s a ridiculous thing to say, but trust me as somebody who lives here, lives down here in the deep South, not just in Florida, but in, in the Alabama type portion of Florida, there were legitimately Republicans here who believed last summer that these protests were right around the corner. That they were about to happen here. They never did. They never materialized. And they never will because this is a frigging red state. Ron DeSantis has signed a of legislation into law that takes away our first amendment freedoms and addresses a problem that didn’t even exist. We don’t have problems with mass protests here in the state of Florida. We don’t have people flooding the streets. We don’t have anybody spray painting buildings because they’re upset about police killing unarmed black people. That’s not happening down here in Florida. Protests, nope, not. It’s simply not. Oh, we’ve had a handful here and there. Nothing major, because again, this is a red state in the South.

This is not a swing state. It sure as hell isn’t a blue state. It’s a red state. These people don’t care. They cheer on the police officers. And by the way, so does this legislation, because Ron DeSantis is actually working as part of this to give $1,000 bonuses to police officers here in the state of Florida for literally no effing reason at all, just because, hey, you chose to do this job. Here’s an extra thousand dollars. This man is pandering and he is pandering so hard that it makes my brain hurt. And unfortunately the idiots that reside in the state of Florida eat it up. They love it. They’re completely ignoring all of his corruption with the pay to play scandal for him giving Publix the rights to give the vaccine exclusively. They’re ignoring the fact that he sent special shipments of vaccine to his wealthy donors. They’re ignoring his horrid handling of the pandemic. Florida’s been one of the worst States on that. They’re ignoring all of that and they’re praising him for taking away their rights. Ron DeSantis has likely already won re-election in the state of Florida. But let’s hope that the rest of the country is smart enough to not give him an even higher office so that he stays contained down here in Florida.