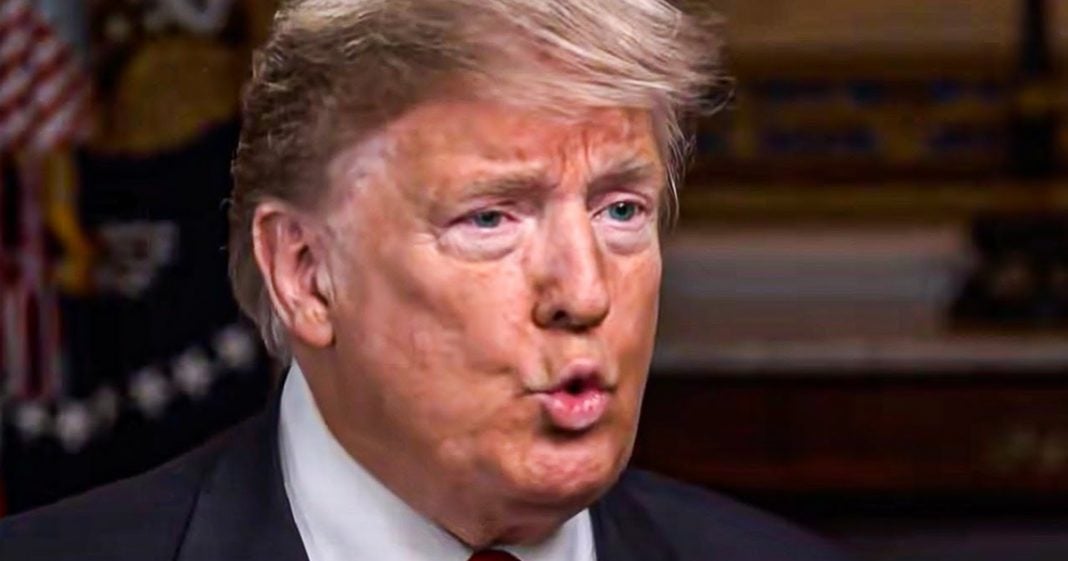 Donald Trump could easily be in more legal trouble soon, after E. Jean Carroll’s attorneys filed a motion to prevent the U.S. Department of Justice from running his defense in her defamation case. The lawyers are arguing that the alleged defamation was not an official “presidential” act, and therefore the DOJ cannot serve as his counsel in the matter. Furthermore, as Trump is no longer president, having successfully pushed all the lawsuits against him back, he should not be granted the use of the DOJ. Ring of Fire’s Farron Cousins explains what’s happening.

Donald Trump’s legal problems might be getting much, much worse in the very near future. Last week, lawyers for E. Jean Carroll, the reporter who says that Donald Trump sexually assaulted her in an apartment store bathroom, or excuse me, changing room, back in the 1990s, her lawyers submitted a filing a motion in court to expel the US department of justice from the case. Now rewind the clock back to about a year or so ago. Donald Trump was able to have the US department of justice act as his defense for this particular case, because they claimed in court that Donald Trump actually was acting as president of the United States when he issued the alleged defamatory statement against Ms. Carroll.

And so, E. Jean Carroll’s lawyers have had to go to court this week and say, listen, obviously defaming somebody was not an official act of the president of the United States. He was not acting within his official capacity and therefore this was not an action done by the president that would warrant the entire department of justice getting to work on the case for him. And we move to expel the DOJ. Trump has to get regular lawyers. It’s honestly a pretty straightforward matter. And again, it creates an interesting legal question here when Donald Trump did the alleged defamation, calling her a liar saying that she was too ugly to rape. Was that an official act by the president of the United States or was that just regular old Donald Trump saying those horrible things about this woman?

That’s interesting because if that was an official, official action of the president of the United States, and that is the kind of thing that gets recorded and preserved is that, is that really who we want to be as a country? I mean, it is who we are as a country. Let’s be honest with that. We know very well what this country is and what Donald Trump is. So it would kind of serve us right. But at the same time, Donald Trump does not deserve any of the legal protections that the US department of justice would be able to offer him. Obviously, since this is a defamation case, this would in fact, go in front of a jury eventually. And that jury is automatically going to be slightly tainted, at least, when knowing they’re going, or hearing from the actual United States department of justice. That carries a lot of weight, especially in jury trials and it’s basically their way of putting the thumb on the scales of justice to tip it back their way.

Hopefully Ms. Caroll’s lawyers prevail in this. There is no reason Donald Trump should be represented by the DOJ. He should have to hire his own personal lawyers. And I hope she is successful in her lawsuit, not just because of the defamation issue, but because and I guarantee you if it ever came to this, it would settle before it ever got to this point, she is seeking a DNA test from Donald Trump because she still has a sample of the DNA of the alleged assault. So if his DNA Matches the DNA on her outfit from that day, she couldn’t have been lying and therefore Donald Trump did in fact defame her. That is what this entire case hinges upon, by the way. Now, statute of limitations has expired I believe for the sexual assault. There may be certain loopholes and extension. So maybe if she’s able to prove that they can go back and take that to criminal. But at the very least, the outcome of this case could tell us for a fact, whether or not Donald Trump did in fact sexually assault this woman.