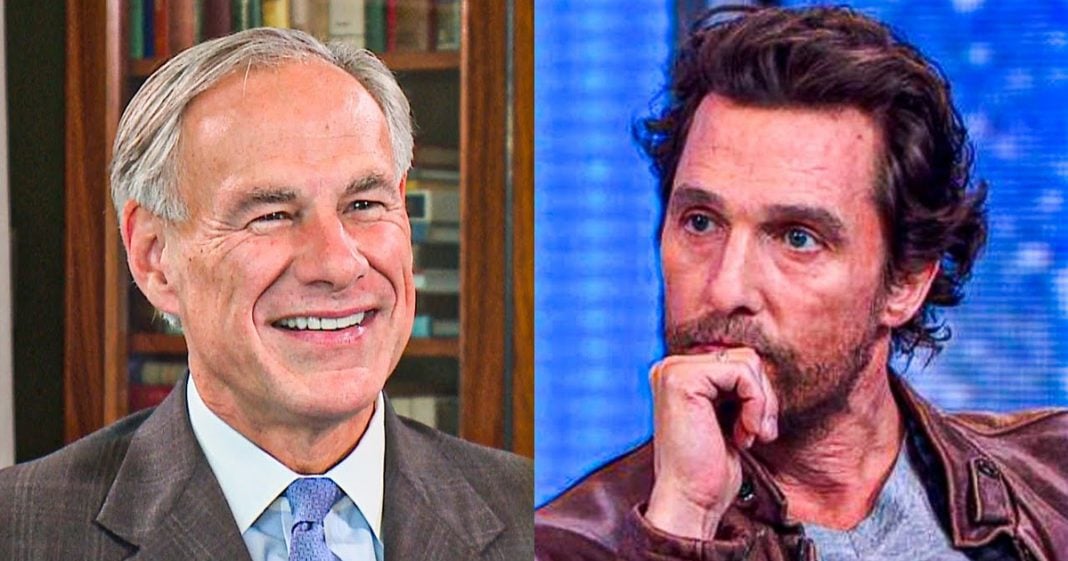 A new poll in Texas shows that actor Matthew McConaughey has a nearly 10-point lead over incumbent Republican governor Greg Abbott, should Matthew choose to run for governor. This idea has been hinted at for a very long time, though McConaughey hasn’t committed to anything just yet. But the willingness of voters to choose someone with no experience over their current incumbent Republican actually says a lot about where the state could be headed, as Ring of Fire’s Farron Cousins explains.

According to a new poll by the Dallas news, actor Matthew McConaughey is currently, I guess you’d have to call him the front runner in the Texas gubernatorial race. Matthew McConaughey, according to this new survey, polls at 45% among likely voters compared to incumbent Republican governor Greg Abbott’s 33%. So McConaughey has a 12 point advantage over the current incumbent Republican governor of Texas. Now McConaughey, by the way, has not officially announced that he is running. He has teased it. The press is helping tease it out a little more. But if he decides to throw his hat into the ring, like he he’s actually already doing very well and he hasn’t even officially declared yet. And he has plenty of time to do it before next year’s election. He is winning among Democrats. He’s winning among Independents and he’s actually pulling a ton of Trump supporters as well.

Why? Because that whole anti-establishment thing, and he’s pulling a decent number of actual regular Republican voters as well. Like he could pull it off. Now I know nothing of Matthew McConaughey’s political leanings. I haven’t needed to, so it’s not exactly something that I’ve studied or looked at. So I guess if this is the thing that’s going to happen, I’m going to have to look more into that. But typically I am against, you know, these celebrity types from entering politics and saying, hey, I think I can run the second biggest state in the country. Ah, that’s probably a recipe for disaster. You really do want to have people in those positions as Donald Trump just proved who know what the hell they’re doing. But, you know, people have done it in the past. It’s not completely unheard of. So it is what it is.

And I, I don’t know that McConaughey would be good or bad. I just know that it’s hilarious and very telling for the Republican party that he is already beating them. And I think he actually does lean conservative on his political views based on what I know. So for conservatives in the conservative state of Texas to say, you know what, I would rather have McConaughey than this guy, that, that’s remarkable. And it shows that the disaster from winter storm Uri from earlier this year might still be resonating with these voters. They might be looking at the response to the pandemic in their state and realizing that this guy Abbott is not good for us. That could be why everybody is clamoring towards McConaughey. Not because they want to give the, the actor the opportunity to run the state, but maybe, maybe because they want anybody but Abbott in charge.