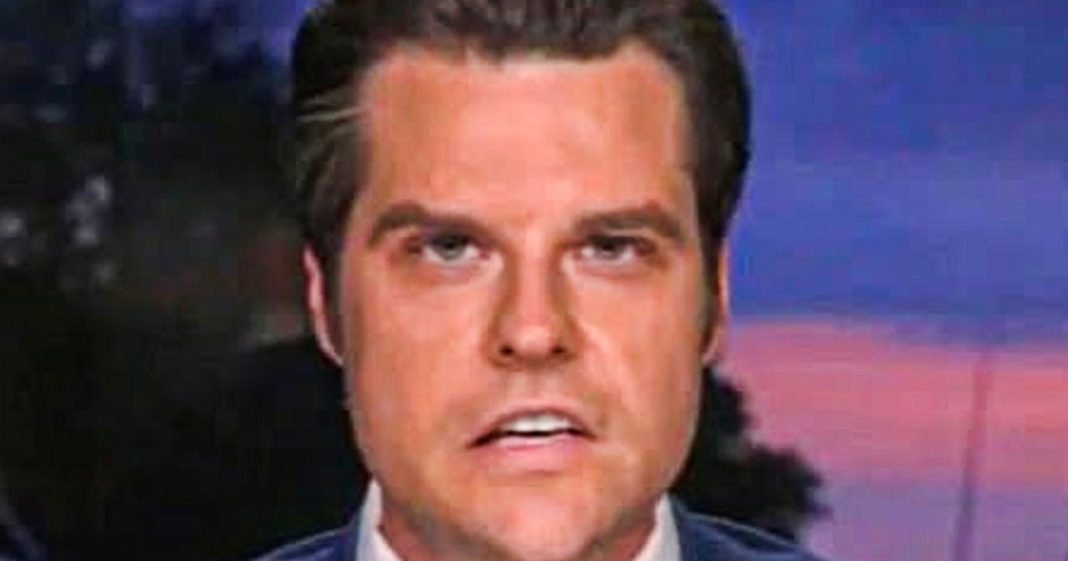 An ex-girlfriend of Matt Gaetz is now terrified that her phone calls with the women involved in the scandal may have been taped, and that she could end up being charged with obstruction of justice as a result of this. This new information is coming from Politico, and it says that the ex-girlfriend has confided in friends and family members about her fears. The report also raises the possibility that there are more cooperating witnesses than previously known. Ring of Fire’s Farron Cousins brings the latest details.

At this point, there is absolutely no way that this entire Matt Gaetz scandal doesn’t eventually get made into a movie because there are so many different moving parts, so many different pieces to the puzzle and as I like to say, because it’s true about every 36 hours, we’re getting a new, a new part of the scandal breaking. And here is the latest because yes, there, there are new revelations here. And the latest revelations actually involve an ex-girlfriend of Matt Gaetz who had spoken on the telephone to a woman that had been trafficked by Joel Greenberg, who is now according to a report, I believe a report from CNN, says that she’s panicking actually, excuse me, I’m sorry. It was Politico. But anyway, she’s panicking and terrified because she believes that the conversation, the telephone conversation she may have had with this woman who had been trafficked and is obviously a part of this investigation.

She’s worried it may have been recorded by the feds. She’s worried that this victim had called her knowing the call was reported because she was working, according to the fears, with federal authorities to get Matt Gaetz’s ex-girlfriend on tape. And again, according to the reports, Gaetz’s ex-girlfriend has spoken to her own family and friends saying she’s worried she might now be charged with obstruction of justice. Huh? That’s interesting because usually when people have phone conversations with one another, um, the, the two parties involved, or even if it’s multiple parties, don’t typically do anything that could even be construed as obstruction of justice. So what the hell did they talk about in this phone call, right? If you’re worried that one of your phone calls broke the law, then that’s probably a good sign that you might be somebody federal authorities want to get a warrant on to actually be able to listen into your phone calls.

Not saying I support the surveillance state that we currently live in. No, but I do understand that yes, in criminal investigations, especially involving human trafficking, yeah, kind of a thing that does need to happen. So what happened in that phone call? Why would she freak out? Why would she think she obstructed justice in that telephone conversation? That’s the million dollar question, isn’t it? But here’s an answer, not to that question, but little bit of another puzzle piece, I guess more than an answer falling into place. If her fears are true and her phone call was in fact recorded, it would mean there are more cooperating witnesses working against Matt Gaetz than we previously knew about. I don’t think Matt Gaetz walks away from this. I do believe at this point that this ends with him going to prison. The evidence is too overwhelming at this point. And if his ex-girlfriend is worried that she may have obstructed justice, she knows who to call. You can look up the phone number for the FBI tip line and say, hey, listen, uh, I think I have some things I need to clarify. Otherwise, if you don’t approach them and be proactive about it, you’re going to be on the defensive probably pretty soon. And that’s not going to be a fun place to be.