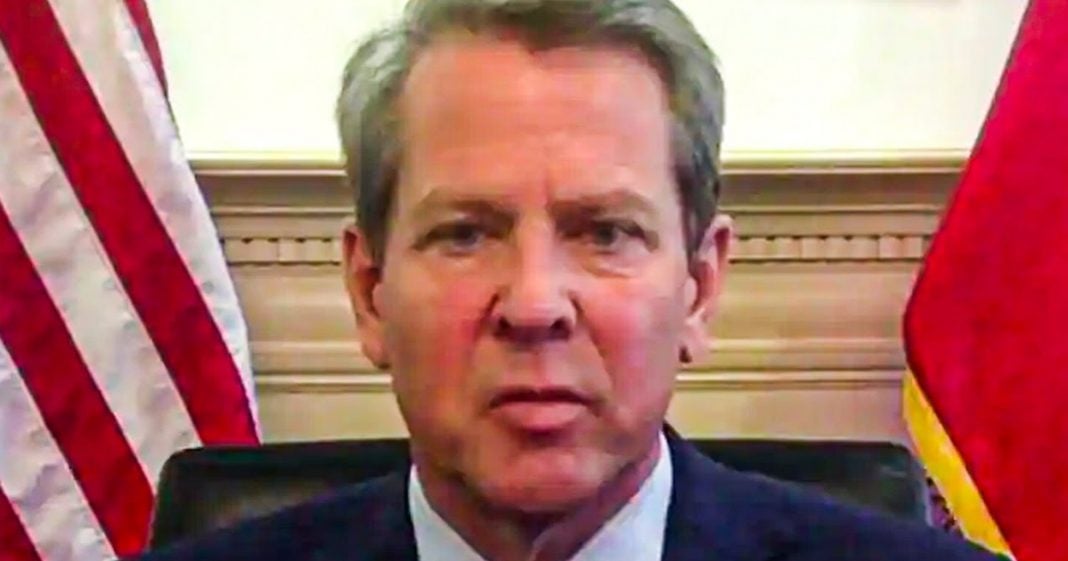 Republicans in several Georgia counties have voted to censure Republican governor Brian Kemp and Republican Secretary of State Brad Raffensberger for NOT going along with Trump’s lies and overturning the state’s election results. Even with former Senator Kelly Loeffler coming to their defense, the county parties still decided that they don’t want to let any officials off the hook for doing the right thing. Ring of Fire’s Farron Cousins explains what’s happening.

Five Georgia counties have now voted to censure the three top Republicans in the state, governor Brian Kemp, Lieutenant governor Geoff Duncan and secretary of state Brad Raffensperger. Five counties, counties of Whitfield, Appling, Baldwin, Fulton and DeKalb have voted to censure these Republican leaders, the same Republican leaders that they, they voted for and they supported. But the Republican parties of those five counties censured these individuals because they did not, in their own words, show enough loyalty to Donald Trump. It’s not that they weren’t loyal to him, it was it wasn’t enough loyalty. You know, I mean, you’re, you’re, you’re a good, good lap dog. But every time I open the front door, you run out. So you’re loyal, but you still, you’re not that loyal, right? Is, is that the problem? They weren’t good enough lapdogs? I mean, hell, they’ve already passed one of the most restrictive voting laws in the country ever. And that’s not good enough for you? Or did you just wait to censure them till after they did that?

The problem that these Republican County parties have with these individuals, obviously, is the fact that they did not overturn the election results in the state of Georgia as Donald Trump begged them to. And as a result of that, since there can be no dissent within the Republican party, no differing viewpoints, they’re being censured. Just like officials in Nevada got censured last week. Just like officials and even Cindy McCain got censured in Nevada a month or two ago. They cannot stand for any Republican to not stand firmly behind Donald Trump and everything he says, even if it’s a lie, that’s the problem with these counties. That’s a problem that they have with these individuals. I mean, Brian Kemp is as loyal of a Republican lapdog as you can get. The guys in absolute scumbag. But even that’s still not enough, you’ve got to be an even bigger scumbag.

That is what the Republican party is telling us today. It’s not enough to just be a classical, evil conservative. You have to be an evil boot-licking kissing conservative today. And if you’re not that well, you may as well be a RINO. That is what we are dealing with in the opposition party today, folks. And as I’ve repeatedly said, there is no room for negotiation with these individuals. There is no talking these individuals down. There is no compromise to be had with individuals willing to do this within their own party. It is time to just let them self destruct. Let the Republican party go down this dangerous path that iit’s on because it leads to destruction for them. That’s it. That’s what happens down the end of this path folks. And we know it. Polls show it. The mass exodus of people throwing away their Republican voter registration shows it. The amount of money that these never Trump Republicans, the ones who voted to impeach him, is raising. That shows it, it all shows it. Going down the path of Trumpism is a path of self destruction for the Republican party. So I say we let them keep walking that path.