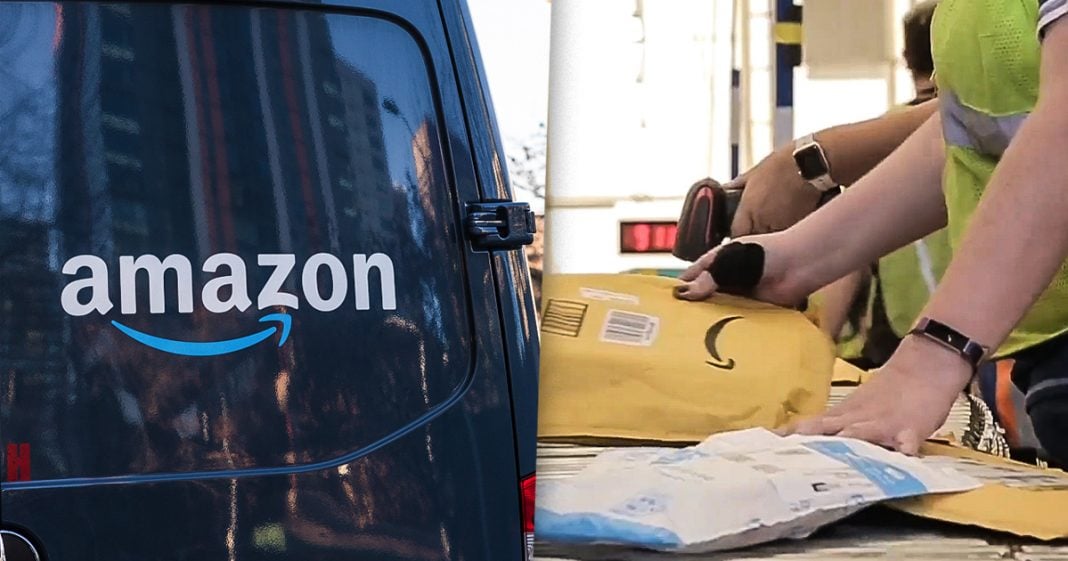 Via America’s Lawyer: From shoddy COVID protocols to relentless working conditions, the ongoing disputes between Amazon executives and employees is a battle between David and Goliath. Although employees lost a bid to unionize in Alabama, co-founder of Amazonians United Jonathan Bailey joins Mike Papantonio to give an insider perspective on the fight for workers’ rights since organizing one of the first employee walkouts at an Amazon warehouse last March.

Mike Papantonio:             Amazon workers lost a bid to unionize after a very decisive vote in Alabama last week. The corporate Goliath has been no stranger to headlines targeting the horrendous work environment and constant surveillance of their employees. Joining me now to talk about this is Jonathan Bailey, who helped organize one of the first employee walkouts at Amazon warehouse last March. He’s been on the front lines. He’s since co-founder of a group Amazonians United and is now running for city council. Jonathan, thanks, thanks for your efforts. I’m sorry it failed in Alabama. No surprise there. That’s a pretty anti-union kind of state and they sure put a lot of money, Amazon put a ton of money to try to make that fail. You helped lead one of the first employee walkouts at a New York warehouse just over about a year ago. Talk to us about what led up to that as well as what the response was from the higher ups when you did that.

Jonathan Bailey:               Yeah, absolutely. So, for us, we actually had a, you know, like probably a lot of different like worker’s actions starting with a petition. For us though, our, our petition kind of because of Amazonians United’s relationship to Amazon workers international, it was, it was filled out by thousands of Amazon workers across the world. But kind of what really like triggered a lot of the, the worker’s actions is that we were organized enough in the warehouse so that when there was a case of the virus in our warehouse, we were prepared, we were prepared to take action. It’s been said that our warehouse was the first warehouse that there was, that there was a case of the virus. And for us, we’re pretty sure that that’s not true, but we were the first that was organized enough that we could take action to make sure that our coworkers were safe and that we could keep our community safe as well.

Mike Papantonio:             Well, that’s part of the, that’s, that’s part of the whole idea of union, isn’t it? It is to, to bring everybody up, to let everybody understand that we’re all in it together. That there are two sides, whether you like it or not, you know, the worker’s interest is not the same as the CEO’s who’s trying to maximize their profits. And so once you get to that in your head we’ve, we’ve lost a middle class in America, middle-class is gone because of a lack of unions. And so right now, this is an important fight. The latest union vote in Alabama ultimately came up short. Was this a result of union busting by Amazon? Or is there just, that there’s just not a taste for this in the American public right now? What’s your take?

Jonathan Bailey:               Yeah, well, you know, there’s been erosion of people’s like really like our, our even understanding of working class power. The idea of workers power isn’t something that’s really a part of the general like US populations consciousness. And so, you know, it, it’s kind of a lot of things. It’s, it’s a cultural problem. It’s a problem I think, you know, in terms of our, our legal framework, you know. Like we should, we should try to, we should be trying to create more systems that support workers. But also, you know, us as Amazonians United, we’ve put forward a kind of, a specific approach for our organizing and, and because of that, you know, we’ve been able to stop Amazon from, like, from stealing our safe and sick leave under New York city law. We’ve been able to compel Amazon to start paying us paid time off, as it promised us when we first started working. For us, we look at the problem as one, of a lack of workers power, and we start, we start there. We start with the question of, okay, how do we help people come together to fight for, for change in our workplaces and, and change the material conditions of our lives?

Mike Papantonio:             You know, part of the, part of the problem, Jonathan, I’m reading more and more is there, that there is this, it’s, it’s almost a cultural, I guess call it, let’s call it the magic unicorn thinking. And that is, well, this is, you know, this is something that is heavily internet driven. It’s, it’s, it’s part of a system, a new, a new way, a new culture of how we sell things. It’s, it’s new, therefore it must be okay. And, you know, this kind of thinking is dangerous. And my point to you, and I just want to quick, I got about 30 seconds. You actually, co-founded the group, the Amazonians. And here’s what I got to tell you, the whole world’s looking at your success here. So I know you take that seriously. About 30 seconds, what’s your response?

Jonathan Bailey:               Yeah. You know, my, my, the thing that I want everybody to understand is that everything changes when you shift from watching and, and saying, hey, that’s great to, to participating. When you make that shift, everything changes. And so if you’re an Amazon worker watching this right now, like, please hear the call. Like, you know, it, like you are the, you’re the hero that you’re looking for. Like, nobody’s going to be able to just come in and save you and change the conditions of your workplace. If, if you’re a worker, you know, it’s up to you to change it.

Mike Papantonio:             Yeah. Jonathan is not just Amazon riding on this, where it comes to union rights. It is the beginning of maybe a very important fight and we hope you’ll stick it out. Come back on the show. We want to see your progress as it develops over the next year. Thank you for joining me.