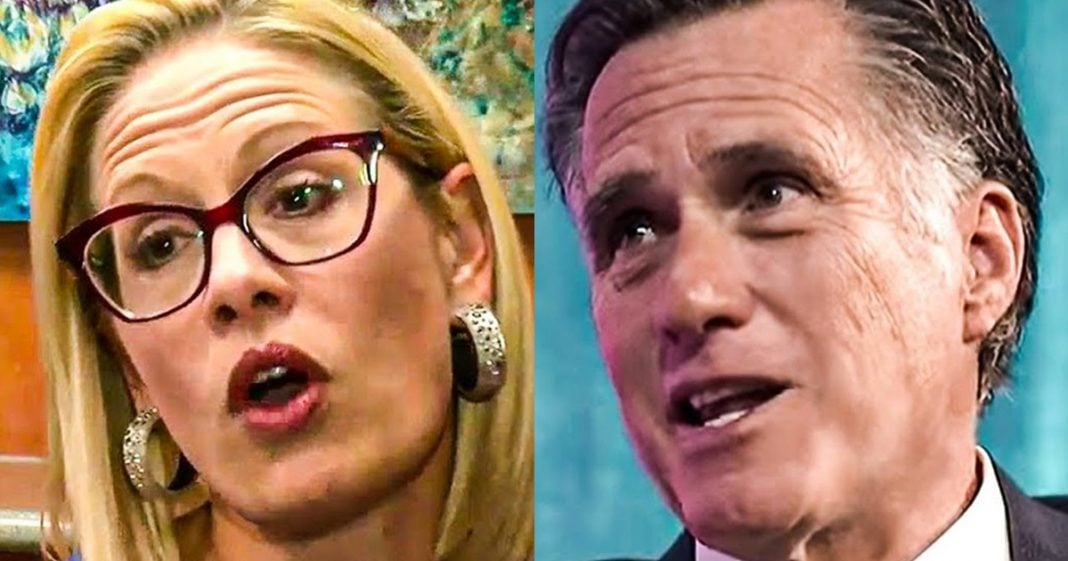 Centrist Senators Mitt Romney and Kyrsten Sinema have teamed up with a ridiculous minimum wage increase proposal. Their proposal would bring the minimum wage to $11 an hour and then tie it to inflation, which would leave American workers in a perpetual state of poverty. This proposal is weak and won’t do enough, and American workers deserve better than these centrist ideas. Ring of Fire’s Farron Cousins discusses this.

Well folks, the centrists in the United States Senate, who effectively helped to kill the $15 an hour minimum wage increase that we could have had about a month or so ago, have now teamed up to come up with their own minimum wage increase because they agree we gotta increase it. They just don’t want to increase it too much, right? We don’t want to make people’s lives too decent. So Mitt Romney Republican and Kyrsten Sinema Democrat have teamed up on a proposal and they say they’ve got a total of 20 of the more centrist members of both parties. And their proposal is an $11 minimum wage, after that tied to inflation. And they claim that, you know, within a few years, like the original proposal, it’ll get us to $15 an hour. We just, you know, don’t want to give people too much money too soon, even though by the way, $15 minimum wage was broadly supported by, by American voters.

Huge majority of them actually supported that. So instead of giving the public the popular thing that they liked, the centrists say, well, what if we just do a little less than that? And for the life of me, folks, I will never understand the brains of a centrist because they make no sense. You’re literally going against what your own constituents are telling you to do, the people who you depend on for their votes to stay in office. They’re telling you do this thing, and you say, what if I do a little less than that? Eh, you still like me then? You still vote for me then? What is wrong with these morons? Again, this makes no sense. The corporations who have to increase their minimum wage based on this legislation have already admitted to their shareholders this will not hurt their bottom line at all. And by the way, and we’ve talked about this the few corporations that already did raise their minimum wage to $15 an hour, they all reported increases in sales. They made more money.

So there is no way to slice it for this idiotic centrists proposal to make sense, as opposed to going with a $15 an hour or higher minimum wage. American workers have been screwed over for far too long. It’s time that they get something back, put the minimum wage to at least $20 an hour and then tie it to inflation. Put it to where it would be if it had been tied to inflation. That’s what we have to do because otherwise they’re constantly going to be behind. If we don’t get them up to where inflation is now, and then tie the two together, we’re going to bring it up a little, then tie it to inflation. So you see it always rises together, but never meets because we never got them that initial bump to put them even. And therefore these workers will continue to be in a cycle of poverty that centrists like Romney and Sinema are apparently perfectly fine with.