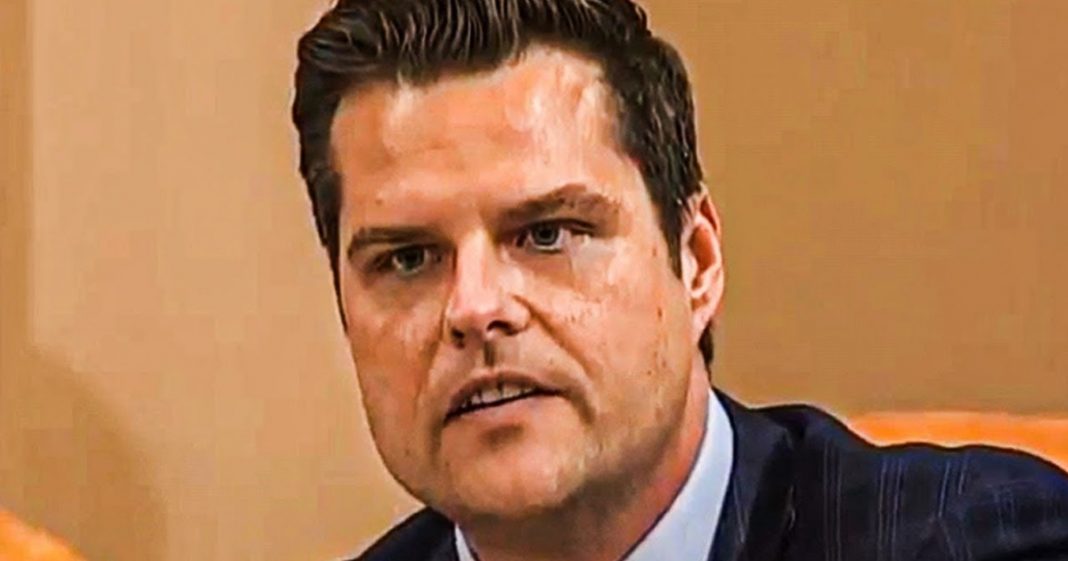 Business Insider spoke to nearly two dozen former classmates of Matt Gaetz from his old high school, and they painted a very clear picture of who Gaetz really is. One went as far as to describe him as a “smarmy womanizer,” while yet another said that everyone else grew up except for Matt. These pictures are a very important piece of the puzzle, as it shows that this is who Gaetz has always been. Ring of Fire’s Farron Cousins discusses this.

This past week Business Insider published a story where they had spoken to 21 of Matt Gaetz’s former high school classmates from right up the road actually, Niceville high school right here in Florida’s first congressional district. And they all painted a pretty clear picture of what a scumbag Matt Gaetz has always been. One of them, a woman by the name of Erin Scot mentioned in this article, was a, it was a friend of Matt Gaetz in high school. They were on the debate team together. She said they used to do quote, dumb kid stuff together in the summers. She said that in 2009 at a wedding rehearsal dinner, and this was even before Matt Gaetz ran for state legislature, Matt Gaetz showed pictures of a woman that he had allegedly slept with. Which is exactly one of the things that he is going to be investigated for in the house of representatives, because let’s not forget amidst all the scandals of Joel Greenberg and everything Gaetz is tied to.

He’s also been accused of showing naked photos to other members of Congress, of women he has allegedly slept with. And as Erin Scot pointed out, yeah, he’s literally been doing that for at least 12 years. That’s not surprising at all. This is the Matt Gaetz we knew. Another classmate had this to say, actually, no, I’m sorry. This is from Scot again. It says, while the rest of us grew up, Gaetz stayed the same. He may have gotten his law degree and put on a suit and tie, but behind all that, he’s still the same guy who takes out a cell phone to show friends naked pictures of the women he’s recently bedded. He can come and knock on your door, smile for your photo ops and hold all the baby he wants. But the fact of the matter is that Gaetz is a smarmy womanizer with no intention of doing anything for the district that doesn’t first and foremost advance his political career.

I wish more people in this district where I am right now would read this. This is phenomenal and to be honest, it’s true. Okay. I can’t testify obviously to any of his womanizing, or showing the photos. I have clearly not been privy to that. But as far as being one of his constituents, what has he done for us in this district? Nothing, not a thing. His first move when he got elected to Congress was to try to abolish the EPA. Abolish the EPA when he is in a state that is basically dependent on tourism dollars and that tourism is ecotourism that would be devastated if we abolish the EPA. So yes, the guy has done absolutely nothing for us. That’s just on a personal Florida’s first congress, congressional district matter. Let’s talk about this from more of a legal matter. As I always say, if you’re trying to build a legal case, you know, if you’re the prosecution, what you want to do is try to establish a pattern of behavior to show that yes, not only is the person guilty of the things they’re being accused of here, but they actually have a history of doing things similar.

Or you say, look, the behavior started here and it continued to escalate into this. That pattern of behavior, that history that leads up to the grand events, is vital. And that is what this article is. That is what these 21 former classmates of Matt Gaetz are essentially confirming that yes, the guy has always been a scumbag. Yes, the guy has always been a child and most importantly, he stayed this way because he never faced any consequences. As I’ve repeatedly said, daddy was always there to bail him out. He never had to learn, to learn a lesson and he continued to fail upwards. So you couple that with a pattern of this behavior and the end result are the stories we’re seeing today.