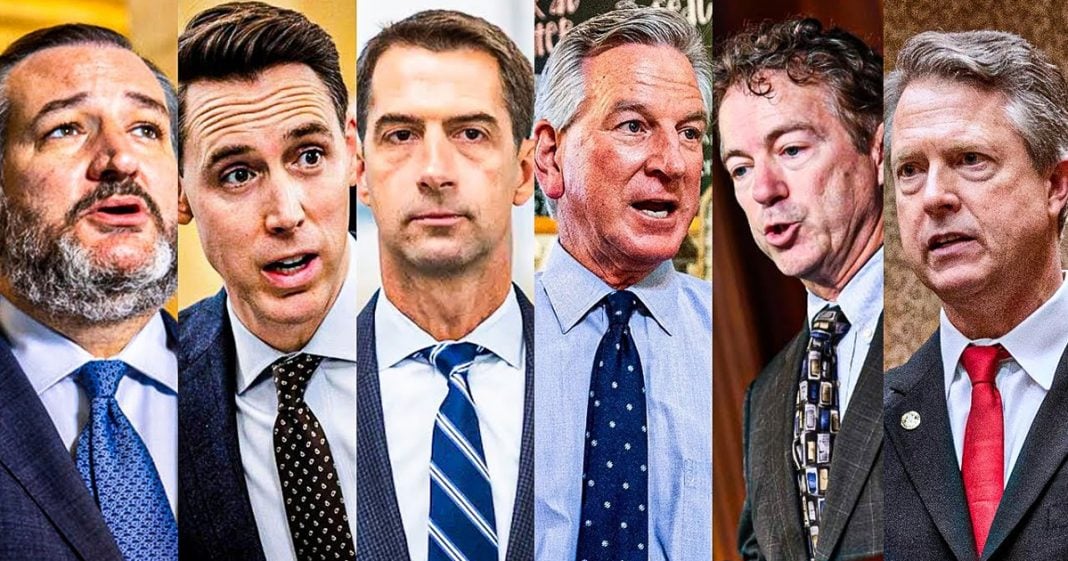 Six Republican Senators voted against a bipartisan measure this week that will allow the DOJ to speed up their review of anti-Asian hate crimes and to strengthen the reporting system. The Senators – Cruz, Hawley, Cotton, Tuberville, Paul, and Marshall – claim that this isn’t necessary and that this legislation was rushed through without consideration. The data is already clear about the issue though, and these Republicans are just letting their hate shine through. Ring of Fire’s Farron Cousins explains what’s happening.

On Wednesday, the Senate voted to advance a bill, an anti-Asian hate crime bill, that basically just expedites the department of justices review process for claims of anti-Asian discrimination or hate crimes. It also strengthens their reporting system for such crimes, right. Seemingly small, relatively innocuous, innocuous. How can anybody not support this? Especially considering the fact that reports have shown that there were at least 2,800 reports of anti-Asian hate crimes in the United States in 2020. On top of that, last year the UN actually had to issue a report about all of the anti-Asian hate crimes happening here in the United States. We also had the mass shooting that took place just a couple of weeks ago. This bill was essentially a no-brainer, no downside to voting in favor of it. Nevertheless, six Republicans, all of them, the usual suspects, decided to vote against this overwhelmingly bipartisan piece of legislation.

Okay. This thing passed with 92 Yes votes in the Senate and six scumbag Republicans voted against it. Ted Cruz, Tommy Tuberville, Josh Hawley, Tom Cotton, Rand Paul, and Roger Marshall from Kansas. You know, not that Marshall’s a big household name or somebody that anybody cares about, but the other five, you pretty much could have guessed their names would be voting No, without me even having to say their names. Now Marshall says that the reason they voted against it is because, well, gosh darn it. This thing was just kind of rammed through too fast without any, you know, examination of the data or the statistics. So we don’t even know if it’s necessary. Bull crap. Turn on the frigging news, you idiot, not Fox news of course, but literally pick up a fricking paper. Okay. How about you look at that UN report, right?

The data is widely available, you lying sack of crap. Again, this was a piece of no-brainer legislation that you didn’t stand to lose anything by voting for. But I think some of these Republicans believe that maybe they did. Maybe they can’t stand up to hate crimes because that might off their base. And if cracking down on hate crimes makes your base angry, then you need to reevaluate where you are in your life, that your base loves to hate certain groups of individuals. I would classify you as a failure at life at that particular point. And that is essentially what the six Republican jackasses are. This Is disgusting and so are these individuals. And they think that not cracking down on hate crimes is going to win them more votes because they understand that their base is just as hateful and disgusting as they are.