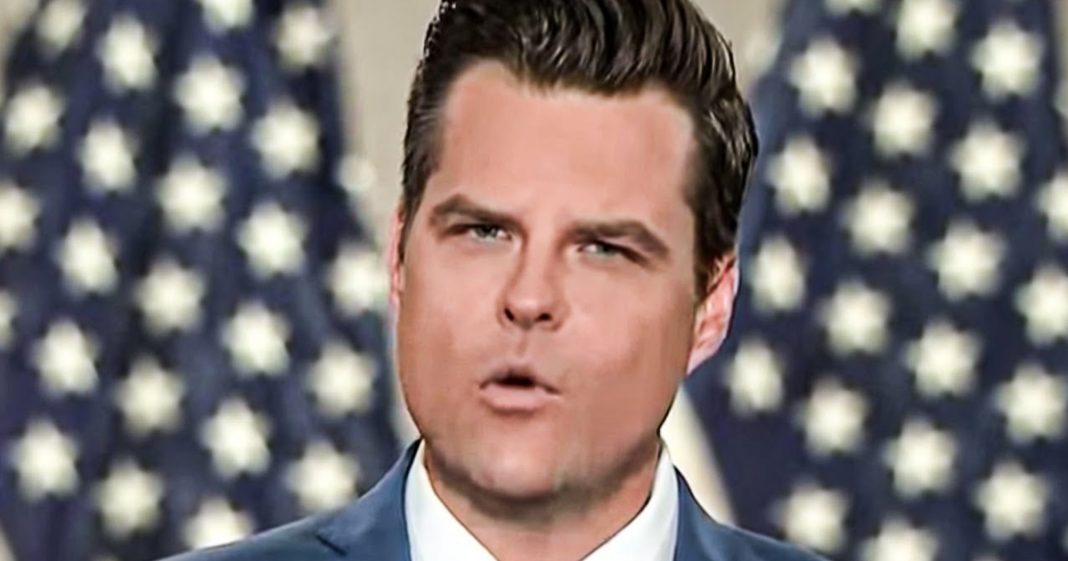 Congressman Matt Gaetz is trying to paint CNN as the bad guy as his legal problems get worse and worse, and he is launching a major ad campaign in his district to say that the network is lying about his involvement. The Republican legislator understands that his district is solid red, and he hopes that he can use the media to convince the public that he did nothing wrong, even as the evidence against him becomes overwhelming. Ring of Fire’s Farron Cousins explains what’s happening.

Republican Congressman Matt Gaetz thinks that the best way to fight back the mountain of evidence that is mounting of potential criminal wrongdoing on his part, the best way to fight that is to launch a massive PR campaign, but he’s not doing a national campaign. No, no, no. He’s, he’s just doing it right here in his deep red district, Florida’s first congressional district. So he’s running these 30 second ads on local TV here that feature highly edited footage from project Veritas. You know, that super credible organization. And what they’re trying to do is paint CNN as the bad guy, showing that, oh, we’ve allegedly got a CNN employee on tape talking about the networks unfair coverage of Matt Gaetz. And this ad is, is supposed to somehow, what? That’s what I don’t understand. Okay. We’re in a deep red district, as I said. This seat, whether it’s held by Matt Gaetz or not, is gonna go to a Republican, not to mention the fact that it’s early 2021 right now.

Why is Gaetz out there with a PR offensive today when bad news keeps breaking about him every other day? You know, what’s the point of this? That, that, that really is the confusing part. Do you just have so much money on hand that you just needed to do something with it? Because this doesn’t matter right now for you. It doesn’t matter for the Republican party at all. They’re not going to lose this seat. So what’s the point? Well, I think the point is this, Matt Gaetz, I believe understands that his days as Florida’s first congressional representative are numbered. But he thinks he might be able to not go to prison and if he doesn’t go to prison, obviously he’s still going to have to work. Okay. He doesn’t have that kind of money to where he can just kick back and say, well, I’m 38, 39, I guess when he leaves office, uh, I’ll retire.

No, he doesn’t have that. So he’s going to have to continue to work. And if he wants to get hired by any meaningful company or law firm or lobbying group, he has to launch this PR offensive so that he can try to muddy the waters. But here again is where it gets a little more interesting too, his ads specifically target CNN and CNN isn’t the group that actually broke the original story. That was the New York Times. And since then the Daily Beast has actually been one of the best outlets reporting on this. Matt Fuller is doing a phenomenal job of reporting on this and adding to his scandal, Gaetz’s scandal, every other day. So again, why go after CNN? Is that all project Veritas was able to cook up in their little editing lab? This whole thing makes no sense and not to mention the fact that it doesn’t actually exonerate Matt Gaetz in any way. What he’s trying to do is misdirect the public around here.

And again, I still don’t know for what purpose. Matt Gaetz has always had relatively decent Republican challengers and by decent, I don’t mean they’re good people. No, no, no, no, no. But you’ve had people who, you know, launch pretty good campaigns, but Matt Gaetz has never actually had to campaign here really. Okay. He doesn’t launch these big primary fights to fight off these opponents. He typically does win handily, but his opponents, their yard signs are everywhere. They do get a decent amount of votes, but not enough to unseat him. So maybe he’s, he’s trying to win over hearts and minds before a Republican primary next year. I don’t know. The whole thing seems a little odd, especially considering the fact that this time next year he could be in jail. Okay. He might be in jail before we even get to a Republican primary down here. So Matt slow your roll buddy. CNN isn’t the enemy and nothing in your ad exonerates you from any of the things that have come out in the press in just the last two and a half weeks.