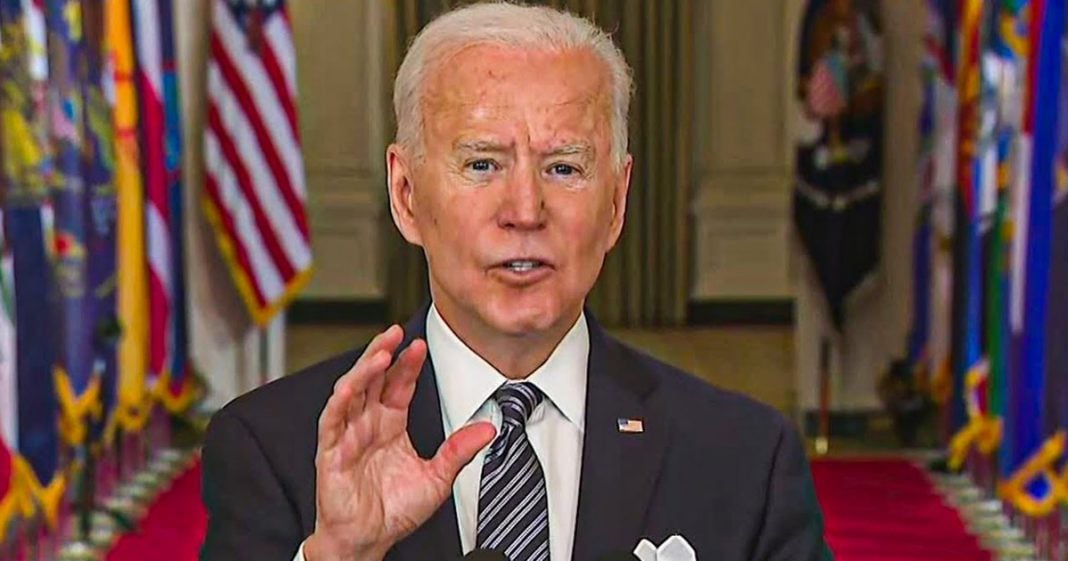 Even though the terms of the eviction moratorium put in place by the government lay out strict penalties for landlords who evict tenants, the Biden Administration’s Department of Justice has not filed a single charge against landlords that are still evicting people. Without enforcement, laws are meaningless, and the public is suffering as a result of this dereliction of duty. Ring of Fire’s Farron Cousins explains what’s happening.

Housing advocates are begging the Biden administration to finally get off their butts and do something about the fact that you have too many landlords here in the United States, completely ignoring the eviction moratorium that has been put in place by the centers for disease control and prevention, right. The moratorium did start under the Trump administration. Biden has extended it so that you cannot kick people out because obviously a lot of people out of work, a lot of businesses have had to cut back on hours. People are hurting right now. So you can’t evict them, except that landlords are still evicting people. And reports have been out for months now that they’re finding stupid reasons, basically exploiting loopholes in the eviction moratorium, in order to evict people. Things such as, hey, that house needs to be painted and you didn’t let me know. So therefore you’re in violation of the a renter’s agreement. So I can kick you out.

Hey, your yard is looking a little disheveled. I noticed you didn’t cut it this week. That’s a direct violation. I found that loophole, your kicked out. Now under this eviction moratorium from the CDC, the justice department has the authority to fine these individuals, what is it, $200,000 and potentially put them in jail for up to a year. These landlords that are still evicting people. Those are the consequences they face if the DOJ opens up a case when they evict somebody against the moratorium. So far, the Biden administration has opened a whopping zero, zero. In spite of countless claims of tenants being evicted, in spite of all the evidence being presented to them by these housing advocates, the Biden administration is not enforcing their own eviction moratorium. This is pathetic. People are being thrown out onto the street and they’re not getting any relief. Even though we have a moratorium in place.

Here’s the thing. An eviction moratorium as per usual, is a good start, but that’s all it is, is a good start. Once this moratorium expires and imagine next time it expires they’re probably not going to extend it because more and more people are getting vaccinated. Things are reopening. So what happens then? What happens to somebody who hasn’t been able to pay their rent in 12 months? They don’t just immediately start paying one month at a time. No, they owe all that back rent, which they cannot pay. So when the moratorium expires and it will eventually expire, these individuals are suddenly on the hook for potentially tens of thousands of dollars that they don’t have. And immediately they’ll all be out on the streets. We will see a massive eviction crisis here in the United States that threatens to topple our economy, yet again. We need rent relief. That’s what has to happen. And I understand there are just regular decent people that are landlords.

Maybe you, you bought a new house, but you kept your old one to rent it out. Or maybe you’re a small time person that owns an apartment complex. I don’t give a crap, by the way, about the apartment groups owned by these massive corporations, these billion dollar banks and whatnot, to hell with those folks. But we do need to help just the average person that says, hey, I have a rental property. It’s not my main source of income. I still work a nine to five, but yeah, you know, I was getting money from this and now I’m not. And I got a mortgage on it. We need rent relief, not just for the renters, but for these individual landlords too. That should be a part of the next COVID relief package. Spend what we have to spend in order to prevent all of these people, the renters and these little landlords, from going under. The federal government has a duty to do that for these individuals because right now the one duty they have of preventing people from getting kicked out, that ain’t happening. So helping them to where they don’t get kicked out on the future is literally the least they could do.